Please ensure Javascript is enabled for purposes of website accessibility
Log In Help Join The Motley Fool
Free Article Join Over 1 Million Premium Members And Get More In-Depth Stock Guidance and Research
By Adam Levine-Weinberg – May 27, 2020 at 10:10AM

After losing over 80% of its value in three months, Spirit Airlines stock has surged more than 50% over the past week-and-a-half. However, investors should expect some bumps on the road to an eventual recovery.

The COVID-19 pandemic drove a massive sell-off in airline stocks beginning about three months ago. While investors may have overreacted, they had good reason to be worried about the airline industry. Between early March and mid-April, passenger throughput at TSA checkpoints went from roughly in line with 2019 levels to down a stunning 96% year over year. With traffic evaporating, airlines have been burning cash at a rapid pace since March.

Spirit Airlines (SAVE -3.31%) shares experienced the biggest plunge among major U.S. airline stocks. Between mid-February and mid-May, the stock lost more than 80% of its value, falling from above $40 to a May 15 closing price of $8.01. However, over the past six trading days, Spirit Airlines stock has come roaring back, jumping more than 50% (with about half of that gain coming this Tuesday). 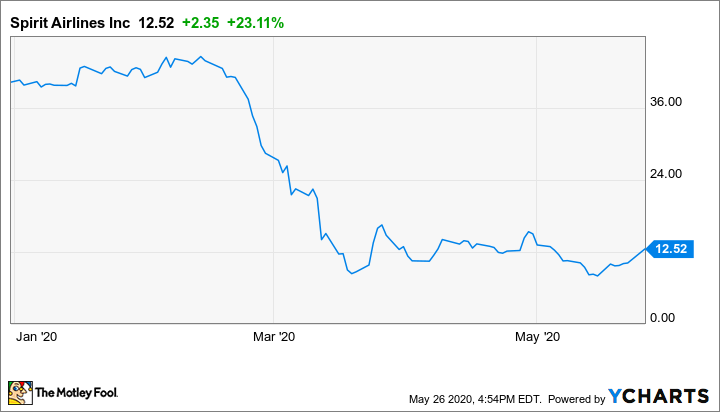 On the one hand, Spirit Airlines stock's recent rally isn't that surprising, as investors had been overly pessimistic about the company's prospects. On the other hand, market sentiment may have swung too far in the opposite direction now, with bulls reading too much into some modestly positive data.

Bulls get some good news

This continued a trend of noticeable improvement that began about a month ago. For the past five reported days, passenger throughput has ranged between 12% and 14% of year-ago levels. As recently as April 30, throughput stood at just 6% of the number of travelers processed on the equivalent day in 2019. While traffic is still just a fraction of pre-pandemic levels, the recent data shows that at least some people are ready to resume travel -- with more likely to do so as tourist destinations start to reopen.

Second, optimism about the search for a COVID-19 vaccine is growing. The creation of a safe, effective, and widely available vaccine would boost air travel demand immensely, for obvious reasons. Merck recently became the latest pharmaceutical giant to put its resources behind vaccine candidates. And with human testing beginning for several different vaccines, many scientists are cautiously optimistic that at least one vaccine will be ready for mass distribution within a year (and possibly even sooner).

Why Spirit Airlines could stage a comeback

Spirit Airlines stock looks very attractive in a "steady recovery" scenario. Las Vegas and Orlando are key markets for the carrier, so as casinos, resorts, and theme parks start to reopen, demand for its flights could increase dramatically. Furthermore, unlike most major U.S. airlines, Spirit doesn't rely on high-fare business travelers to pad its profits. Business travel could remain weak even after a vaccine is deployed (due to growing comfort with videoconferencing tools, the recessionary economic environment, and business failures during the pandemic), but that wouldn't hurt Spirit Airlines. And while some people will have to cut back on leisure travel due to job loss, the budget carrier could more than offset that headwind with market-share gains, as budget-conscious travelers seek out its low fares.

Indeed, due to their dependence on high-fare business travel, American Airlines, Delta Air Lines, and United Airlines must be cautious about restoring capacity as demand recovers. Large swaths of their route networks can't operate profitably based on leisure demand alone.

With some of the largest airlines in the country planning to err on the side of too little capacity over the next year or two, Spirit may be able to return to 2019 capacity levels long before demand recovers fully. That's crucial, because unlike the legacy carriers, Spirit has no good options for shrinking its fleet in the near term.

This isn't a done deal

While air travel is starting to recover and there are hopeful signs on the vaccine-development front, investors shouldn't expect smooth sailing for Spirit Airlines stock. Many Americans are itching to get away from home, but many others have no interest in getting on a plane until they've been vaccinated.

As a result, while getting traffic up to perhaps 30% of 2019 levels may be achievable over the next couple of months, the recovery could slow thereafter. Despite its industry-leading cost structure, Spirit Airlines is unlikely to break even with that level of demand.

Furthermore, delays and setbacks are par for the course in vaccine development. As clinical trials progress over the next several months, some vaccine candidates will likely fail. That could shake investors' confidence, particularly with respect to Spirit Airlines stock and other travel-sensitive shares.

Still, Spirit Airlines has taken necessary (albeit painful) steps to shore up its balance sheet over the past month, including an equity offering and convertible bond issuance. Including federal loans that Spirit can tap if necessary, the airline has ample liquidity to survive even a prolonged downturn. Meanwhile, COVID-19 isn't likely to hurt the airline's long-term growth prospects. As a result, there could be more gains ahead for Spirit Airlines shareholders.