Please ensure Javascript is enabled for purposes of website accessibility
Log In Help Join The Motley Fool
Free Article Join Over 1 Million Premium Members And Get More In-Depth Stock Guidance and Research
By Reuben Gregg Brewer – Updated May 28, 2020 at 10:15AM

The aerospace supplier reported an earnings beat, but there was more-upbeat news than just that.

Shares of aerospace company Triumph Group (TGI 6.19%) skyrocketed at the start of trading on Thursday, rising by nearly 45% in early action. The stock was still up by roughly 33% at 10:30 a.m. EDT today. This big gain comes just a day after the stock rose sharply on news about developments (an asset sale and the inking of a supply contract with Boeing, among other things) that will allow it to better weather the impacts of COVID-19. The big news today, meanwhile, involved earnings.

Triumph reported adjusted earnings per share of $0.69 for the fiscal fourth quarter of 2020, a figure handily beating Wall Street's consensus estimate of $0.54. That said, there was a lot of complexity in the quarter, including the impact of asset sales, restructuring efforts, and one-time writedowns, so the GAAP numbers were anything but pretty.

But the key takeaway from the quarterly results was the fact that Triumph appears to be regaining its footing. Not too long ago, investors were concerned that it wouldn't survive the impact of COVID-19 on the aerospace industry. The revised view here is further buttressed by the company's efforts to cut costs and its success in amending a credit facility. 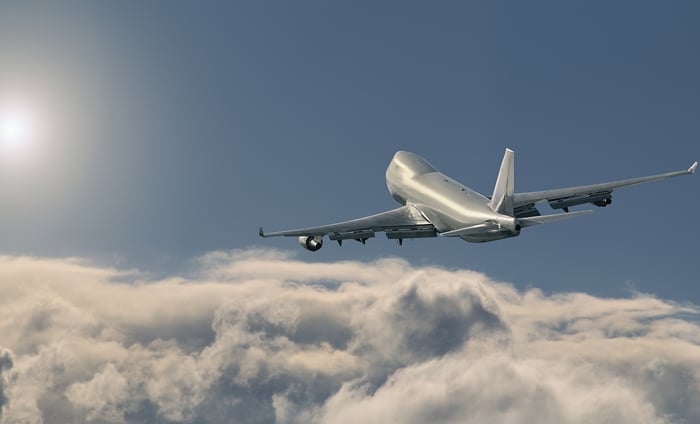 Also important for the company was the recent announcement from Boeing that it was starting to resume production of the 737 Max. That aircraft got a specific mention in Triumph's earnings report as a headwind. Assuming that the troubled aircraft doesn't face any more production issues, it looks like Triumph will have a bit of a tailwind in future quarters as it looks to extend its progress into fiscal 2021.

Triumph Group's stock has been crushed over the past year. Even after two days of massive gains, it remains roughly 60% below its late 2019 peak. Given the uncertainty surrounding air travel today, with COVID-19 still a major health issue, most investors would probably be better off sitting on the sidelines here until there's more clarity in the overall airline industry. Still, investors have obviously (and perhaps rightly) been pleased to see the positive news out of Triumph.