Please ensure Javascript is enabled for purposes of website accessibility
Log In Help Join The Motley Fool
Free Article Join Over 1 Million Premium Members And Get More In-Depth Stock Guidance and Research
By Royston Yang – May 29, 2020 at 9:15AM

These companies both have the capacity to keep growing their revenues at a strong and steady pace for the long term.

Investing in growth companies can be a great way to build your wealth, but many that qualify for that description now may not continue to over the long term. Businesses that in their early years adopt rapid-growth tactics may find their arc fizzles out if management can't craft a long-term strategy to maintain it.

This factor is one thing that separates good companies from great ones. A good company may display short-term growth rates that outpace its peers -- until its initial buzz dissipates and it starts to stagnate. Great companies, on the other hand, can sustain their growth over the long term. Investors will do well to hold on to shares of those companies for decades.

Here are two growth stocks that I intend to hold forever. 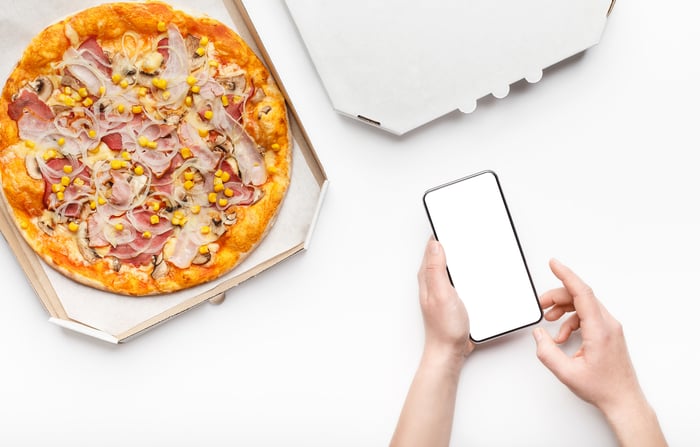 Domino's Pizza (DPZ 2.01%) is the global No. 1 in the quick-service restaurant pizza segment. It earns its revenue via a franchise model that has been successful for years. International franchisees provide 51% of its sales and the rest of its revenue come from the U.S. 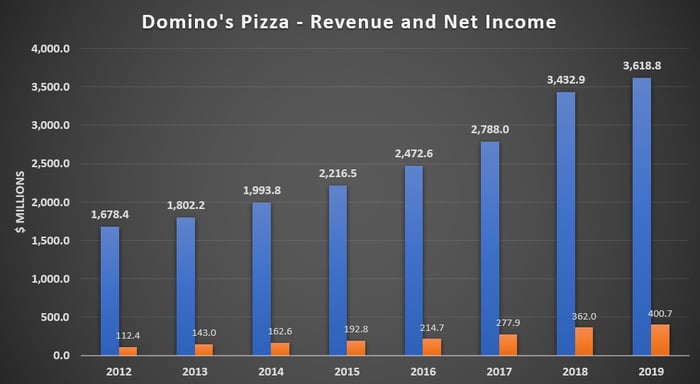 As the graph above shows, Domino's has had an enviable and consistent track record of growing both revenue and net income. From 2012 to 2019, revenue more than doubled from $1.68 billion to $3.62 billion, while net income more than tripled from $112 million to $401 million. In addition, the company also generates consistent levels of free cash flow every year.

CEO Richard Ellison has stated that fewer than 20 of Domino's U.S. outlets were temporarily shuttered due to the pandemic, and all of its remaining outlets have moved to a contactless delivery model. Around 1,750 of the company's 10,933 international stores -- about 16% -- were closed as of April 21. Though that will put a temporary dent in the company's earnings, its track record and financial strength suggest that it should bounce back easily.

The global quick-service restaurant: pizza market is valued at around $84 billion, of which Domino's had a 19% market share in 2019. Around 51% of the market is fragmented among smaller regional chains and independent players, providing Domino's with ample opportunities to extend its reach and market share for many more years.

Apple (AAPL 3.08%) needs no introduction. When the veteran computer manufacturer created the iconic iPhone back in 2007, it opened up a brand-new tech segment that in turn led to an explosion of innovations.

Apple's products and services have taken the world by storm and the company's new iPhone releases every year are still hotly anticipated. Even though the iPhone is now into its 12th iteration, it still manages to draw crowds of loyal fans. However, of late, Apple's revenue-growth focus has shifted from products toward services, such as the App Store, and its subscription-based streaming offerings, Apple Music and Apple TV+.

For the six-month period that ended March 28, services accounted for 17.4% of total sales, up from 15.7% a year prior. Revenue from services increased by 16.7% year over year to $26.1 billion for the period. This compares to a small 2.3% year over year increase in iPhone sales to $84.9 billion.

Services represent the future of Apple's growth, and customers have shown they are increasingly willing to pay for subscription-based content of the type it is offering. The other area key segment that should drive growth for Apple is wearables -- items such as the Apple Watch and AirPods. That segment saw a year-over-year jump of 31% in revenue from $12.4 billion to $16.3 billion.

Together, the growth prospects of these two divisions, along with the innovative culture of Apple, should lead to many more years of sustainable growth for the company.