Spotify Technology (NYSE:SPOT) and T-Mobile (NASDAQ:TMUS) are on a roll this year. Both companies reported earnings growth in the first quarter despite the economic slowdown brought on by the coronavirus pandemic.

Different factors play into each company's prosperity, and in each case point to continued success. So how is an investor to decide which is the better choice? Let's dig into both companies to find out. 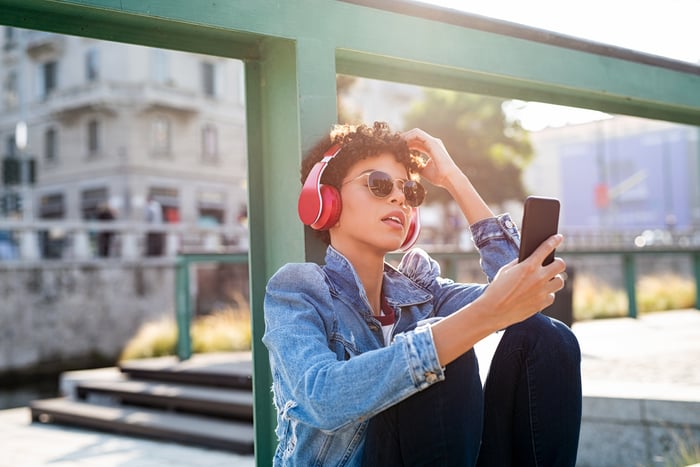 Spotify launched in 2008, and over a decade later is still experiencing phenomenal growth. At the end of the first quarter, monthly active users (MAUs) and subscribers both rose 31% over the previous year. The first-quarter results represent the third consecutive quarter of over 30% year-over-year growth in MAUs, while subscriber growth has consistently hovered around 30% for the past five quarters.

With its increase in users, Spotify's revenue also grew 22% year over year in the first quarter, and subscriber revenue increased 23%. Even so, the company was not profitable, ending the quarter with an operating loss of 17 million euros ($18.7 million).

Spotify generates revenue through subscriptions and advertising. The subscription model provides a recurring revenue stream while the advertising component allows the business to monetize listeners who use the service for free. Subscriptions represent 92% of overall revenue.

The business model is resilient. Consumers love their music, and now there are podcasts, with 19% of MAUs listening to them. The pandemic and shelter-at-home orders led to consumer behavior shifting from listening to Spotify in the car while commuting to increased usage at home. Listening through televisions and gaming consoles grew over 50% in the first quarter.

With the pandemic-induced economic downturn, the company did see an understandable rise in subscription cancellations of 10 basis points over the previous quarter. Contrast this with Q1 2019 when churn was flat sequentially. Even so, churn still improved by 70 basis points year over year.

The pandemic caused a decline in ad revenue as advertisers pulled back spending in March with the rise of government lockdowns. As a result, the company lowered 2020 revenue expectations over previous forecasts to the range of 7.65 billion to 8.05 billion euros, which is still an increase over 2019's 6.8 billion euros.

Like Spotify, T-Mobile is growing. In the first quarter of 2020, the company added 777,000 postpaid accounts, the highest in the industry. Postpaid phone customers are the most valuable because of their lower churn rate and higher average revenue per user (ARPU) compared with prepaid customers.

The rise in customers led to record wireless services revenue, up 5% year over year, illustrating the resiliency of its telecom business despite the pandemic. This customer growth offset a decline in equipment sales from mandatory store closures and shelter-at-home orders, helping the company achieve a modest 0.3% revenue increase over the first quarter of last year.

T-Mobile has strong financials. It earned record net income of $951 million and record free cash flow of $732 million in the first quarter. Its cash from operating activities rose 16% year over year to $1.6 billion, an increase over the previous quarter's $1.5 billion even amid the global economic downturn.

The company is now poised for continued growth with the acquisition of Sprint. The merger of these two telecoms gives T-Mobile access to valuable radio spectrum owned by Sprint. Those spectrum assets bolster T-Mobile's ability to deliver a high-quality 5G network to customers, a key advantage because 5G technology enables devices to connect online at higher speeds, opening up new revenue opportunities like home internet services and equipment upgrades.

Both companies are excellent investments. Both are poised for continued growth. But between the two, T-Mobile is the better choice. It is not only profitable (unlike Spotify), but as a telecom company, T-Mobile's services also remain in demand regardless of the overall economy.

The advent of 5G technology will fortify T-Mobile's revenue for years to come as consumers shift to 5G-enabled devices and services. That technology is poised to make T-Mobile superior to the competition thanks to the Sprint acquisition, and T-Mobile's current subscriber growth proves it's already succeeding against competitors.

Those factors make T-Mobile the winner in this contest.