Please ensure Javascript is enabled for purposes of website accessibility
Log In Help Join The Motley Fool
Free Article Join Over 1 Million Premium Members And Get More In-Depth Stock Guidance and Research
By Luis Sanchez CFA – May 31, 2020 at 10:00AM

The video game industry is evolving, but Activision is keeping its place as an industry leader.

The video game industry has always been intensely competitive, but in recent years, new game formats such as mobile and free-to-play have shifted the landscape. Traditionally, companies would focus on selling games for consoles and charge as much as $60 upfront. Today, one of the most popular games in the world is Fortnite, which is completely free to play.

Some game publishers, such as Take-Two Interactive, have been slow to adapt. The company has extraordinary game franchises but little progress to show in mobile gaming or esports.

Activision Blizzard (ATVI 0.71%) is an example of a video game company that has done a great job expanding into the new frontier of gaming. The publisher of Call of Duty and World of Warcraft now has leading titles in mobile, free-to-play, and console gaming.

Call of Duty finding success in free to play

The free-to-play video game model allows users to download and play a title without paying upfront, but the ultimate goal is to generate revenue by encouraging in-game purchases or displaying in-game ads. The category has taken off in recent years, with massive hits such as Fortnite (owned by Epic) and Apex Legends (owned by Electronic Arts) accumulating an audience in the hundreds of millions. Fortnite alone generates over $1 billion in annual revenue, proving the model is financially viable.

Activision largely watched this trend from the sidelines until March 2020 when it released Call of Duty Warzone, a free-to-play version of its hit franchise (available on both PC and console platforms). The new CoD installment enables 150 players to battle at the same time in a fictional map loosely based on a modern Eastern European city. A cool gameplay innovation is the "plunder" mode, which enables players to use in-game currency to buy items and weapons. The in-game currency can be collected from enemies, and the team who collects the most cash wins.

Although anyone can play Call of Duty Warzone for free, users can purchase in-game items such as player outfits and weapons. Although it's not yet clear how financially successful the game will be, the game logged over 50 million players within the first month -- making it one of the fastest-growing free-to-play games in history. Call of Duty Warzone is a great example of how Activision can stay relevant in this emerging genre. 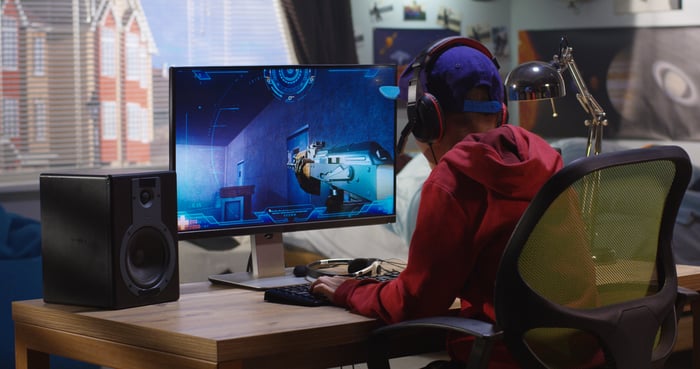 Another rapidly growing area of the video game market is mobile. The number of mobile gamers has exploded thanks to the wide adoption of smartphones in the past 10 years. Today, mobile is the largest segment of the market measured by both number of players and total revenue. In 2018, mobile gaming generated $63 billion in sales, accounting for 46% of total video game sales that year.

Activision operates the Candy Crush franchise, which is one of the biggest mobile games by gross sales. Despite the fact that Candy Crush has been around for years, the game series still tops the U.S. app store charts and has seen its number of active players grow during the coronavirus-induced quarantine this year.

Candy Crush is similarly free to play with in-game purchases, but the company recently introduced in-game advertising to make the app more profitable. In the first-quarter earnings report, management noted that advertising within its mobile segment grew over 75% year over year.

Last fall, the company also released a mobile version of Call of Duty (also free to play with in-game purchases). Although it features different gameplay, it has been another breakout success. As of December, it has been downloaded over 170 million times and generated nearly $100 million in revenue -- and surely these figures are higher today.

With established franchises such as Candy Crush and newer hits like Call of Duty Mobile, Activision has proven it can thrive in the mobile world as well.

It's great to see Activision succeed in emerging categories of the industry. In order for the company to remain relevant, it needs to go to where the players are, and many gamers have clearly migrated toward free-to-play and mobile offerings.

However, it's worth noting that Activision's legacy business has remained strong. The company's latest Call of Duty installation, Call of Duty: Modern Warfare, released in Oct. 2019, has been the most successful release in the entire series, selling the most units and achieving the highest number of active players.

Fans are also excited about the recently announced reboot of the Tony Hawk Pro Skater series, which is set to release its first new game since 2015. This launch shows that there could be significant value in Activision's existing IP library, which has dozens of now-discontinued titles.

It's a good time to be an Activision Blizzard shareholder. The stock is approaching its all-time high thanks to the strong performance year to date, and there are many reasons to get excited about its future prospects.