Please ensure Javascript is enabled for purposes of website accessibility
Log In Help Join The Motley Fool
Free Article Join Over 1 Million Premium Members And Get More In-Depth Stock Guidance and Research
By Bram Berkowitz – Jun 2, 2020 at 9:08AM

These banks are all trading at higher price-to-tangible-book-values than their peers.

While merger and acquisition (M&A) activity will likely pause in the banking industry until the economy rebounds and there is less uncertainty about credit quality, the wave that resulted in roughly 5% of industry consolidation in 2019 shows no signs of slowing. That's according to Tom Michaud, president and CEO of Keefe, Bruyette & Woods (KBW), a bank research firm and investment bank that advised on two-thirds of the largest bank mergers last year. Michaud recently said on CNBC's The Exchange that he expects M&A activity to rebound to potentially even higher levels.

"I think its pretty simple: Look at the stocks that had better price-to-tangible-book valuations and those that don't. You'll get kind of an idea who can be a buyer in this market and that's where you will look for a signal," he said on the show.

Tangible book value shows the value of a company if it is going out of business and must liquidate all of its assets. It excludes goodwill and other intangible assets because they can't be converted into assets of value during a liquidation event. While the market is volatile and valuations seem to constantly be changing, I examined the price-to-tangible-book valuations of most of the large regional banks between $40 billion in assets all the way to nearly half a trillion in assets to better understand the M&A landscape right now. Here are five large regional banks well-positioned to make a move. 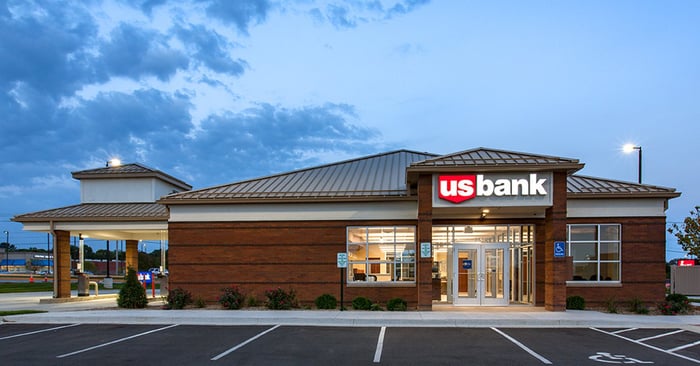 After selling its entire stake in BlackRock and putting even more cash in its coffers, PNC Financial Services (PNC 2.93%) became the most obvious bank that will look to make a move. PNC's CEO William Demchak didn't deny the rumors either, making it very clear that he would love to pick up a bank while valuations are low, like the bank did in 2008 with its acquisition of National City Corp. Trading at a price-to-tangible-book valuation of 1.35 as of June 1, PNC has a very valuable currency right now. The question is whether or not the $412 billion asset PNC Bank can find a willing seller that is attractive enough. This could take some time, but there have already been a number of banks thrown out as potential acquisition candidates.

U.S. Bancorp (USB 3.10%) is perhaps the largest bank technically in the regional space with roughly $542 billion in total assets. The bank has built up a lot of cash with roughly $51.5 billion in total stockholder's equity. In early March on the eve of the coronavirus, after a six-year hiatus from bank acquisitions, U.S. Bancorp essentially acquired State Farm Bank's existing deposit and credit card accounts, as the insurance firm looks to exit banking .

Recently trading at a price-to-tangible-book valuation of 1.30, it certainly could position itself as a buyer right now. If U.S. Bancorp does make a play, expect it to be fairly significant. "I wouldn't expect us to enter a new market with a small depository acquisition, given our other opportunities to do that," U.S. Bancorp President and CEO Andrew Cecere said on an earnings call in July of 2019. He added that the company could continue to focus on non-depository acquisitions, such as those in the payments space, individual portfolios, trust services, or technology companies. So don't rule that out either.

People's United Financial (PBCT) CEO John Barnes said on the company's most recent earnings call that M&A will pause until there is more certainty in the economy. But I am very confident that this bank will continue making acquisitions once conditions settle. In 2018, Congress passed the Economic Growth, Regulatory Relief and Consumer Protection Act, rolling back portions of the Dodd-Frank Act. Specifically, the bill increased the asset threshold that determines which banks are considered a "systemically important financial institution" -- and therefore subject to more enhanced regulation -- from $50 billion to $250 billion. At the time, People's United was larger than $40 billion in assets, but many suspected it was delaying significant growth because it didn't want to cross the $50 billion mark and deal with the enhanced regulation.

As soon as Congress passed the bill, the bank pounced. In the last two years, People's United has purchased the $3 billion asset First Connecticut Bancorp, the $3 billion asset BSB Bancorp, and the $7 billion United Financial Bancorp. The question is whether People's United, recently trading at a 1.18 tangible book value,  will continue with the small buys or hunt for something larger. I've previously written about how I think the bank may eventually purchase another small bank in its home state of Connecticut, but I'm also wondering if the lower valuations now available prompts it to think bigger. Some of the larger community banks in its market, which is largely the Northeast, have run into a bit of trouble. For instance, the $13 billion asset Berkshire Hills Bancorp (BHLB 1.17%), based in Boston, recently traded at a 0.49 price-to-tangible-book value and is on KBW's list of potential dividend-cut candidates.

The roughly $54 billion asset New York Community Bancorp (NYCB 3.99%) is similar to People's United in the sense that it has been chomping at the bit to make an acquisition since the Dodd-Frank roll back. The bank hasn't purchased another bank since 2012, but the company's President and CEO Joseph Ficalora said on an earnings call earlier this year, "we've made it very clear that we have the ability and have the desire to grow by acquisition and create value for shareholders."  Additionally, according to the bank's website, New York Community Bancorp was a very active acquirer between 2007 and 2010 during the Great Recession. The bank recently traded at 1.27 price-to-tangible-book value.

I have been a little concerned about M&T Bank Corporation (MTB 2.67%), given that the Buffalo-based bank does a lot of business in markets like New York that were hit very hard by the coronavirus. But this is an incredibly well-run bank that has been very efficient and delivered strong returns in recent years, and the investing community appears to have strong confidence in the company. Recently trading at 1.40 price-to-tangible-book value , it's tough to leave this off the list. The bank hasn't bought another bank since 2015, according to its website, but as the bank's CFO Darren King said on an earnings call at the end of last year, the bank will "seek" acquisitions when they make sense and add value for shareholders.