An analyst and hedge funds are jumping on board the Sysco bull train.

While Sysco Corp. (SYY -1.08%) has been hard hit by the COVID-19 pandemic, at least one analyst believes the company has made the right moves and has the strategy in place to improve its business post-crisis. Nicole Miller Regan, a Piper Sandler analyst, has upgraded Sysco to "overweight" and with that upgrade boosted Sysco's price target from $58 up to $64, suggesting a roughly 12% premium to today's trading price. The analyst notes the company's proven ability to adapt to current conditions and says that it has a "well-documented plan of action."

Sysco has been hit with a 15% stock price decline over the past three months. The company supplies products and services to food service and hospitality industries and consumers have been spending more of their food budgets on groceries and been cooking at home while social distancing restrictions shuttered doors of many restaurants. But Sysco is positioned to rebound stronger if and when the restaurant and food service industries bounce back.

The question is how quickly will consumers be willing to go out to eat, and how much will capacity restrictions hurt restaurants? For a glimpse into that answer, we can look at The NPD Group, an American market research company that tracked transactions for 70 restaurant chains across the spectrum between fast food and full-service, and found only a year-over-year 18% decline in food transactions during the week ended May 24. That suggests the broader restaurant industry has already rebounded significantly from the April 12 low point when NPD recorded a 43% decline. 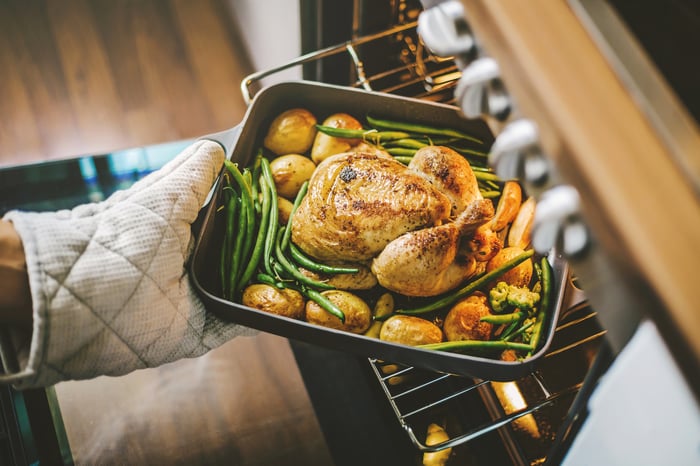 Sysco management said in a May press release that its "strategic approach is focused on stabilizing the business through cost reductions, creating new sources of revenue to drive our upside and preparing for the return in demand by maximizing our opportunities for the long term. Our work to reduce costs and to create new sources of revenue was started soon after the onset of the crisis, and benefits will begin to be realized in the fourth quarter of fiscal 2020."

It appears some hedge fund managers, sometimes called the "smart money," have also jumped on the Sysco bull train. In the latest round of 13F filings as of March 31, roughly three weeks after COVID-19 was declared a pandemic, seven new hedge funds had initiated a position in Sysco, compared to the fourth quarter of 2019. Piper Sandler's $64 price target is essentially saying Sysco should reach roughly pre-crisis price levels sooner, rather than later. $64 per share feels like a safe bet as Sysco has the scale and liquidity to weather the COVID-19 storm and is preparing to cut costs and try new sources of revenue as parts of the economy open up and foot traffic to restaurants returns.

Why Sysco, Middleby, Chart Industries, and Trex Shares Were All Down Today

Why Sysco Stock Dropped 11% This Morning