Exposure to 5G tailwinds and the increasing importance of connectivity could help make these stocks big winners.

Uncertain economic conditions have clouded the market's near-term outlook, and most dividend investors should be balancing the pursuit of yield with a heightened focus on companies backed by solid foundations and competitive advantages. There are plenty of stocks sporting elevated yields amid market turbulence in 2020, but narrowing in on businesses that look positioned to benefit from long-term trends presents a path to identifying income-generating investments that record strong performance despite volatility.

Within that mold, top companies in the telecommunications sector offer some of the best risk-to-reward dynamics for income-seeking investors in today's market. Verizon Communications (VZ 0.52%) and American Tower (AMT -0.39%) are two stocks that look primed to benefit from the expansion of next-generation internet technologies and continue delivering payout growth, and they have the potential to be worthwhile portfolio additions. 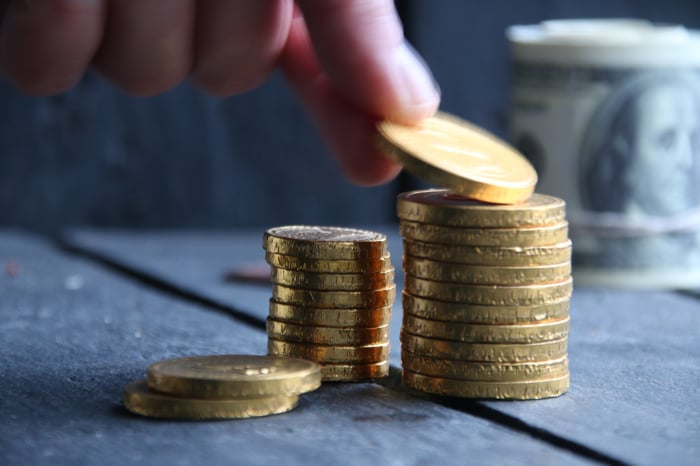 Verizon has more mobile wireless customers than any other company in the U.S., and the telecom giant's network frequently receives accolades for offering the fastest, widest, and most reliable service in the country. With a forward dividend yield of roughly 4.4% and shares trading at roughly 12 times this year's expected earnings, the stock looks like a safe and dependable vehicle for benefiting from 5G tech trends and stacking sizable dividend payments.

5G internet networks will enable upload and download speeds that trounce what's possible on current 4G LTE networks, and this big jump in network performance should pave the way for major advances in technologies including augmented reality, self-driving vehicles, and a wide range of Internet of Things (IoT) devices and applications. Verizon's massive customer base and highly rated service put it in a good position to bridge existing customers to 5G, and the company could see improved pricing power and opportunities to sell service packages for devices outside of the core mobile space. Providing 5G service for enterprises and home internet presents additional paths to growth.

While Verizon's dividend is smaller than that of AT&T (which currently sports a yield of roughly 6.7%), Big Red has smaller debt levels and less exposure to the fast-declining paid television business that's weighing on its chief rival's performance. Challenging economic times might accelerate already fast declines in the paid-television industry, but it's unlikely that customers will move to cancel phone or internet service in large numbers. Verizon has managed to increase its dividend annually for 15 years running, and the essential nature of communications services combined with tailwinds from 5G should help the company continue to build on its track record of payout growth.

Investors who might be hesitant to pick winners in the network provider space, or are otherwise looking for broad exposure to 5G and IoT trends, should take a close look at American Tower. Regardless of whether Verizon, AT&T, or T-Mobile winds up being the biggest winner in the domestic 5G network race, American Tower's leading position in the communications tower market all but ensures that the company will benefit from the new network technology.

American Tower is a real estate investment trust (REIT) that has a dividend yield of roughly 1.7%. Its performance hinges on renting cell towers to network providers. The long-term nature of its lease contracts tends to make the business predictable and relatively low-risk.

American Tower's yield might not look like much compared to what's being offered by Verizon or AT&T, but its business looks poised for steady growth over the next decade and is sheltered from much of the potential volatility that could hit individual players in the wireless-network space. American Tower's yield still compares quite favorably to the 0.65% yield offered on U.S. 10-year Treasury bonds, and the company's central role in facilitating growth for communications services gives the stock avenues to substantial capital appreciation.

Investors also don't have to worry about the dividend being suspended. REITs are required by law to return at least 90% of their taxable income to shareholders in the form of cash dividends, and the increasing importance of wireless communications services and 5G pricing catalysts puts the company on track to continue boosting profits and growing its dividend.

American Tower also looks well-positioned to benefit from fast-growing economies and expanding internet coverage in emerging markets. Towers used for 5G and IoT applications will primarily be performance drivers in the U.S. in the near term, but the company's tower leasing operations still have plenty of room for growth in Latin America, Asia, Europe, and Africa. The REIT's leadership in the domestic market and already sizable installation base throughout many other territories are being strengthened with acquisitions and internal building projects, and the stock appears to offer attractive, low-risk growth prospects and the potential for substantial long-term dividend growth.