Please ensure Javascript is enabled for purposes of website accessibility
Log In Help Join The Motley Fool
Free Article Join Over 1 Million Premium Members And Get More In-Depth Stock Guidance and Research
By Keith Noonan – Jun 2, 2020 at 11:43AM

The e-commerce stock is crushing the market in 2020 and has roughly doubled year to date.

Shares of Shopify (SHOP 4.90%) climbed 19.9% in May, according to data from S&P Global Market Intelligence. The e-commerce stock has posted fantastic performance this year, and it continued to climb last month thanks to strong first-quarter results, new product announcements, and momentum for the broader market. 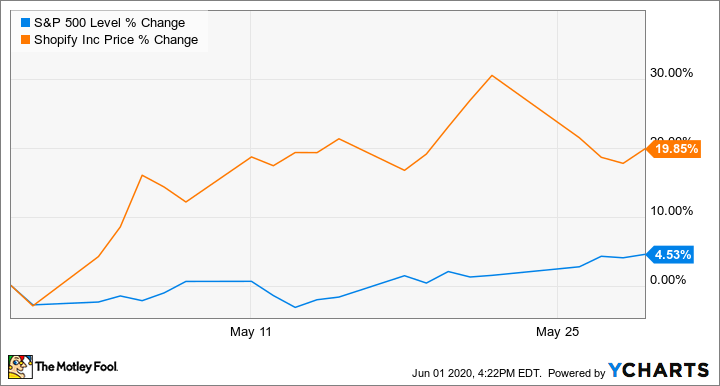 Shopify published first-quarter results on May 6, delivering sales and earnings that came in well above the market's expectations. The company posted non-GAAP (adjusted) earnings per share of $0.19 on sales of $470 million, trouncing the average analyst estimate's call for a per-share loss of $0.18 on revenue of $443.11 million.

Shopify's subscription solutions revenue rose 34% year over year to reach $187.6 million last quarter, and its merchant solutions revenue climbed 57% year over year to reach $282.4 million. Overall revenue for the quarter came in 46.6% higher compared to the prior-year period. The company announced that new accounts created on its platform increased 62% between March 13, 2020, and April 24, 2020, compared to the prior six weeks, and investor enthusiasm for online retail amid growth trends accelerated by the novel coronavirus continued to benefit the stock last month.

Shares also got a boost following new products announced at the company's Shopify Reunite virtual event on May 20. The e-commerce services provider announced Shopify Balance (a suite of software products for merchants to monitor finances and orchestrate transactions, enable advantage of faster in-store spending, and take advantage of a new rewards program) and Shopify Installments -- a new service allowing for installment payments on the platform. The company also announced updates for its Shopify Capital financing service and new gift card, tipping, and international sales features.

Shopify's big gains in May pushed its valuation past that of Royal Bank of Canada, giving it the status of Canada's most valuable company. Some analysts have voiced concerns that Shopify's valuation has grown too quickly, but its central role in enabling small and medium-sized businesses to thrive in online retail and increasing adoption among large enterprises suggest that its long-term outlook is still very promising.