Will the pharma giant be interested in acquiring a mid-cap partner with a promising treatment for hepatitis B?

It is no secret that in the field of biotech, small- to mid-cap companies that develop innovative therapies for difficult-to-treat diseases (such as cancer) and a variety of rare conditions are often acquired by large-cap players for billions of dollars. Last year, the biggest ever biotech deal happened when Bristol Myers Squibb (BMY 0.30%) acquired Celgene for $74 billion.

Today, let's take a look at a company that is at the forefront of battling chronic hepatitis B and has the potential to be acquired by its research and development partner. 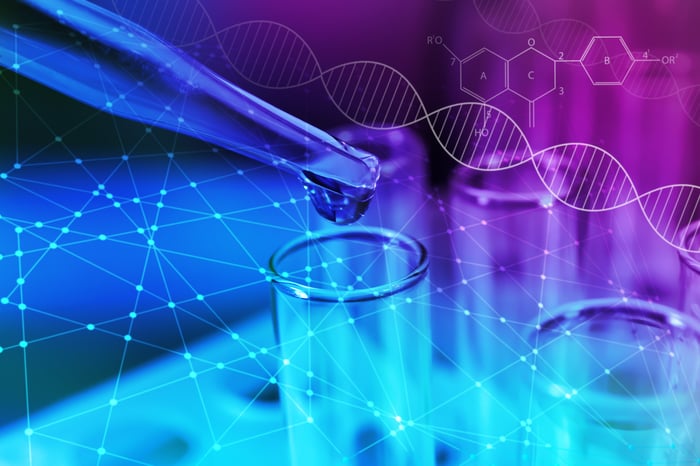 The case for the takeover

With more than $307 million in cash and investments, no debt, and a market cap of $3.28 billion, Arrowhead Pharmaceuticals' (ARWR 5.30%) enterprise value stands a little below $3 billion. Meanwhile, its collaborative partner Johnson & Johnson (JNJ -0.46%) has over $17 billion in cash and investments on its balance sheet, which is more than enough for the company to take over Arrowhead should it decide to do so for a critical reason.

The key technology Arrowhead possesses is JNJ-3989 (ARO-HBY), a ribonucleic acid interference (RNAi) therapy. In this therapeutic class, small RNA molecules are injected into the patient's body to inhibit the expression of viral genes. JNJ-3989 was designed to silence the levels of DNA to RNA transcription in the hepatitis B virus (HBV).

Currently, Johnson & Johnson has already invested $250 million in cash and stock for JNJ-3989's development efforts. Under the current partnership, Arrowhead will license JNJ-3989 to Johnson & Johnson for $1.6 billion if it is successful in later-stage clinical trials, and will be able to receive royalty rights in the mid-teen percentages, an arrangement that has plenty of profit potential.

Around 257 million people (mostly in developing nations) around the world have chronic HBV. Even if JNJ-3989 can functionally cure 2% of this population with a price tag of $1,000, Arrowhead would realize $6.6 billion in revenue (more than its entire market cap) under a 10% royalty agreement. Hence, Johnson & Johnson will save a great deal of money by acquiring 100% of the therapy's commercializing rights.

Obviously, the risk of the acquisition lies with the fact that Arrowhead's pivotal therapy may fail in later stages of its clinical trial. The current definition of a functional cure for chronic HBV, as defined by the scientific journal Clinical Gastroenterology and Hepatology, is as follows:

Seroclearance of hepatitis B surface antigen (HBsAg)—loss of detectable serum HBsAg by currently available assays with or without seroconversion to hepatitis B surface antibody (anti-HBs). Multiple studies have shown that seroclearance of HBsAg is associated with improved clinical outcomes in persons with chronic HBV infection, despite the persistence of HBV DNA in the liver.

In phase 2 clinical trials, about 26 out of 43 patients who were treated with JNJ-3989 and standard of care drugs over 12 weeks witnessed HBsAg levels decline to less than 100 IU/ml. At the beginning of the trial, patients' HBsAg levels ranged from 3,212 IU/ml to 9,381 IU/ml.

The first problem with the data is that the functional cure hypothesis relies on the premise that a reduction in HBsAg levels can act as a surrogate for suppressing HBV. However, there is no conclusive evidence that this effect can be long-lasting, that is, for patients to witness negligible levels of HBsAg after they cease to be treated with an experimental therapy.

The second problem is that the therapy has not been tested against a placebo. It's possible that the standard of care drugs given to patients, such as nucleotide analogs, are solely responsible for patients' reduced HBsAg levels.

Fortunately, there have been cases where large-cap biotech companies decide to flex their muscles with their acquisitions even though the target company is early in its clinical investigation. Last year, Audentes Therapeutics published interim phase 1/2 clinical data on its gene therapy AT132 to treat X-linked Myotubular Myopathy. This fatal disease causes severe muscle weakness and results in breathing difficulties; 80% of patients require the use of ventilators and many do not survive until adulthood.

In the clinical trial, four out of nine children who took AT132 were functionally cured of the disease, so as not to require the use of ventilators. There were eight serious adverse events during the study, but the company didn't disclose if they were treatment-related.

The results were good enough to impress Tokyo-based Astella Pharma (ALPMY 0.08%). Last December, the company acquired Audentes Therapeutics for $3 billion at $60 per share, or a 110% premium over Audentes' share price before the deal was announced. Once the acquisition was complete, Audentes announced more positive efficacy and safety data for AT132's phase 1/2 clinical trial.

While talks of a potential takeover are still early, I think it's one of the possibilities Arrowhead investors should be on the alert for, as the therapy reaches the end of its clinical trial by 2022. Johnson & Johnson is more than capable of taking over Arrowhead at a premium for the full rights to JNJ-3989, should its end phase data readout be positive. Meanwhile, biotech investors should check out other areas that Arrowhead's pipeline has to offer to consider whether buying its stock is a risk worth taking.