Please ensure Javascript is enabled for purposes of website accessibility
Log In Help Join The Motley Fool
Free Article Join Over 1 Million Premium Members And Get More In-Depth Stock Guidance and Research
By Billy Duberstein – Jun 3, 2020 at 8:52AM

Shares of Datadog (DDOG 1.52%) rose a stunning 58% in May, according to data from S&P Global Market Intelligence, as the cloud application monitoring company reported blockbuster revenue growth in its first-quarter earnings report.

Cloud software stocks have been all the rage over the past few years and especially during the COVID-19 pandemic, as investors anticipate accelerated adoption of these next-generation platforms to enable work, medical care, and education from home. Add Datadog's confirming financial results on top of that, and the powerful combo sent shares vertical during May. 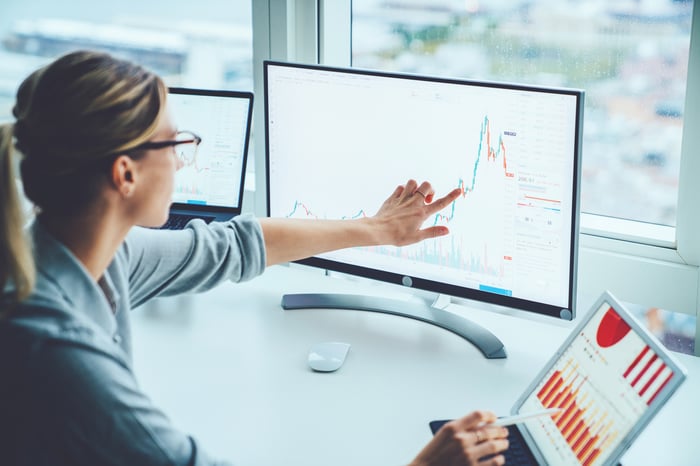 During its quarterly earnings report, released on May 11, Datadog saw 87% revenue growth, with the number of customers spending over $100,000 nearly doubling to 960, up from just 508 one year ago. The company also released its new security monitoring product that integrates security, developer, and operations personnel into a single monitoring app.

Importantly, management noted that Datadog had surpassed 400 different third-party integrations. These are key, as the value proposition for Datadog's service is that it seamlessly monitors a wide variety of IT equipment, applications, and software.

Not only did Datadog smash expectations for the quarter, but management also guided to revenue of $134 million to $136 million for the current quarter, well ahead of analyst estimates for $126.3 million. Over the full year, Datadog expects adjusted operating profits between breakeven and $10 million, which is impressive for high-growth cloud software companies, many of which are putting up losses in order to fuel growth.

After the recent run-up in its stock price, Datadog is raising money, having sold $650 million of 0.125% convertible notes due 2025 at the end of May, with a conversion price of $92.30, or about 30% above today's share price. Normally, I don't like to buy a stock when it is effectively selling shares to the public after a big run. On the other hand, there have been many cases of high-growth cloud software companies issuing shares and then continuing to climb anyway in recent years.

If anything, Datadog's management appears to be making a shrewd move after May's meteoric 58% run and 162% rise since its September IPO, bolstering the company's war chest at attractive prices so it can double down on innovation. While the stock remains very expensive, Datadog's future appears quite bright, and shares could still make for a good buy with a long-enough time horizon. With all-star growth and rising margins, Datadog should be at the top of any tech investor's buy list on any pullbacks.