Please ensure Javascript is enabled for purposes of website accessibility
Log In Help Join The Motley Fool
Free Article Join Over 1 Million Premium Members And Get More In-Depth Stock Guidance and Research
By Billy Duberstein - Updated May 18, 2020 at 8:57PM

These high-octane growth stocks could look like genius buys a decade from now.

The month of May means it's graduation season -- though this graduation season is shaping up to be the weirdest ever, thanks to the COVID-19 pandemic. While today's graduating classes will have to attend virtual celebrations, today's new parents may be wondering how they're going to invest and save for their kids' college tuition a decade or more from now, especially as the economy hurtles toward a recession.

What's the key to spotting these winners early on? Judging from past multi-bagger stocks, they usually have a few things in common:

The following three stocks have all these characteristics, and thus the potential to fund a good part of that big future expense. 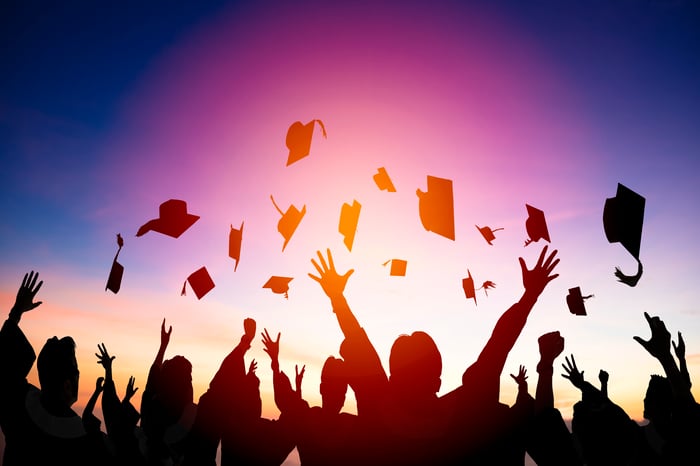 If you had to bet, would you bet cyber attacks will continue to grow for the next 10 years and beyond? I would. That's why CrowdStrike Holdings (CRWD 1.00%) could be a huge money-making opportunity. That's not only because cyberthreats are bound to proliferate in the years ahead, and with them, effective cybersecurity solutions, but also because CrowdStrike takes a novel approach to cybersecurity that has the potential to lead that market.

CrowdStrike's system uses the power of cloud computing, artificial intelligence, and big data. The beauty of its solution is that its effectiveness gets better and better the more and more customers it acquires -- a textbook case of the network effect at work. The company's Falcon platform allows for security at customer endpoints, yet all threat data is eventually transmitted back to the company's centralized, cloud-native Threat Graph. The more customers CrowdStrike racks up, the more data it collects, and the more sophisticated its Threat Graph becomes. That means CrowdStrike's approach has a great chance of honing its algorithms in real time to combat the latest and most sophisticated cyber attacks.

Despite having just gone public one year ago in June of 2019, CrowdStrike has more than doubled its $34 IPO price. Still, the stock remains far below its 52-week highs of $101, currently residing around $77 per share.

The stock is not cheap by any means, trading at a whopping 23.7 times sales; however, CrowdStrike is posting the explosive revenue growth to back that up. The company grew revenue 110% in its fiscal 2019 and 93% in fiscal 2020, with the most recent quarter's revenue growth clocking in at 89%. The company's annual recurring revenue has surged to $600 million, up a whopping 92% from the prior year.

Clearly, CrowdStrike's offerings are catching on in a big way with customers, and its asset-light cloud-based model could prove highly profitable in the future. Though the company is currently reinvesting all profits into growth, thus generating net losses, CrowdStrike's adjusted gross margins climbed to 77%, up from 70% a year ago, making a strong case for future profitability.

The combination of explosive revenue growth, expanding margins, and an industry set to grow by leaps and bounds over the coming years means CrowdStrike could turn a small amount of money today into a sizable nest egg more than 10 years out.

Another recent IPO is Datadog (DDOG 1.08%), which just went public in September of last year but is already up 150% from its initial IPO price. Datadog was founded in 2010, a year before CrowdStrike, and like CrowdStrike, it got an early jump on the cloud revolution. While CrowdStrike does cybersecurity, Datadog helps companies monitor and fix problems in their cloud infrastructure and applications across their entire IT environment.

Datadog had the foresight to anticipate today's much more agile yet complex IT environment, as companies shift workloads to public clouds, private clouds, and on-premise IT centers, with the need for "always on" applications to serve customers, employees, and other parties in real-time. That means if something isn't working correctly, developers and operations personnel need to be able to locate the problem and fix it quickly. And with today's IT stack complexity, it's a tough job that Datadog does. Furthermore, Datadog is cloud-agnostic and helps businesses digitize faster and solve problems quicker, which in the end saves companies time and money.

That's enabled Datadog to acquire 11,500 total customers in just 10 years, with 960 customers who pay Datadog more than $100,000 per year, up from just 508 in the year-ago quarter. In its recently reported quarter, Datadog's revenue surged a whopping 87%, as companies rushed to digitize as fast as possible amid the coronavirus. In fact, Datadog seems to be benefiting from the downturn, not suffering from it: Management just raised full-year guidance to $555 million to $565 million, up from $535 million to $545 million, and now predicts an adjusted operating profit this year, as opposed to the slight losses it had previously forecast.

Importantly, the company also expanded its gross margin over the past year from 73% to 80%, showing the scalability of the business model and the potential for big profits down the road. That piece is key, since the stock is quite expensive, at a whopping 49 times sales.

The high valuation could mean a pullback is in the cards, or at least significant volatility for this young growth stock. Still, looking out 10 years and beyond, Datadog seems poised to eventually grow into this valuation and then some, making it another strong candidate to seed your college tuition portfolio.

Finally, while many might shy away from Chinese stocks, especially amid U.S.-China tensions and some recent scandals at specific Chinese start-ups, OneConnect Financial Technology (OCFT 5.36%) appears to be a high-growth cloud software platform that's the real deal. The "start-up" just went public on the New York Stock Exchange in December, but OneConnect was actually incubated under Chinese financial giant Ping An (PNGA.Y 0.88%), a $200 billion market cap company that has been around more than 30 years, and which still holds a significant stake in the company.

That seems to take some of the fraud risk off the table. And when one does that, OneConnect's business looks downright impressive. OneConnect is a portfolio of cloud-based digital solutions specifically geared toward China's financial and insurance industries, but the company has also landed big-time customers in other east Asian countries outside China as well. OneConnect's cloud-based modules span sales and marketing, financial product development, risk management models informed by big data, AI-powered customer service and operations, and technology infrastructure.

OneConnect has the advantage of Ping An's 30 years of financial data, which it uses to inform its AI-based tools across Ping An's large customer base. In addition, much of the Chinese financial and insurance industries haven't been digitized as much as their American counterparts, so there is a huge runway for growth for OneConnect.

Of course, the first quarter in China was hit hard by the coronavirus, with much of the country locked down from mid-January to mid-March. That not only interrupted OneConnect's own business, but that of its customers. Since OneConnect gets paid for many services according to usage, that crimped growth in a big way.

Still, OneConnect managed to grow revenue an impressive 29.6% last quarter, with revenue from third-party customers -- in other words, customers outside of Ping An or its Lufax fintech subsidiary -- growing an even higher 50.4%. And while OneConnect continues to rack up big net losses, remember that it has a strong "anchor customer" and investor in Ping An, and like the two companies mentioned above, OneConnect's gross margin expanded greatly from 28.5% to 34.8% over the past year.

OneConnect should see things reaccelerate as the Chinese economy recovers. With the competitive advantage of having Ping An behind it and a strong leadership position, OneConnect seems poised to dominate the financial software-as-a-service industry in Asia. That could make the company a massive winner over the next decade.