Please ensure Javascript is enabled for purposes of website accessibility
Log In Help Join The Motley Fool
Free Article Join Over 1 Million Premium Members And Get More In-Depth Stock Guidance and Research
By David Butler – Jun 4, 2020 at 4:54AM

Chipotle and Disney have been impacted by COVID-19 in different ways. With both stocks down a few pegs, which is the more appealing investment?

Comparing Disney (DIS -0.10%) and Chipotle Mexican Grill (CMG 0.10%) might seem like comparing apples and oranges, but from an investment perspective, it doesn't make a difference. I consider both Disney and its industry to be the better values.

These two businesses operate in very different categories: Disney entertains; Chipotle feeds. In the short term, the shutdown of Disney's theme parks might seem to give Chipotle a distinct advantage, but both have felt the pain.

Right now, Disney is looking at a "phased reopening" beginning July 11. A straight-line return to previous attendance won't be possible, because park capacity will be controlled in order to enable better social distancing, and reduced capacity means reduced dollars. On top of that, how many people will want to go to a crowded theme park after what just happened -- and is still happening -- due to COVID-19? 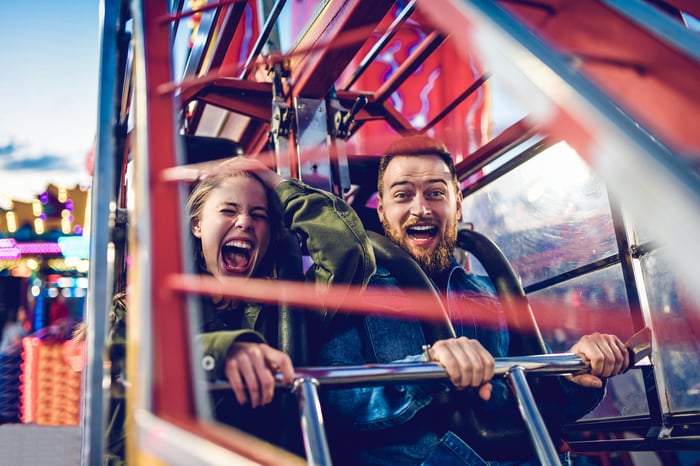 Disney's fiscal second-quarter results showed the true impact the shutdown has had on its business. Overall revenues still grew 21% to a little over $18 billion, but that includes the consolidation of Hulu and Twenty-First Century Fox. Income from continuing operations fell 85% to $1.06 billion. Net income from continuing operations fell 91% to $475 million. And $0.26 in diluted earnings per share is a stark contrast to last year's $3.53.

When looking at the breakdown of the company's various revenue streams, it's not hard to know where to look. Parks, experiences, and products took a 10% hit in revenues. Operating income from that segment fell 58% to $639 million.

Chipotle restaurants remained open during the shutdown, but with eat-in dining off the table, so to speak, the company relied on online ordering. Online orders increased 81% in the first quarter to $371.8 million. While comparable-store sales increased 3.3%, total transactions declined 1.4%, which included a Leap Day benefit. The quarter was lopsided, as comp sales declined by 16% in March.

The restaurant chain's diluted earnings per share fell 13.7% year over year to $2.70.

Even as so many stocks have fallen well below their companies' book values in recent months, Disney and Chipotle have both remained relatively strong. This speaks to investor sentiment about the strength of their businesses. Disney carries a P/E ratio of around 44 times earnings, with a price-to-book ratio of 2.3. Chipotle is trading at more than 80 times earnings, with a price to book of 16.55. From a value perspective, Disney is clearly the better play.

They'll both be OK

Both companies carry a great deal of cash on the books. Disney had $14.34 billion in cash and cash equivalents as of the end of the last quarter. Chipotle carried $500.3 million. These capital holdings on the balance sheets are more than enough to keep both companies insulated for quite a while.

The big question will be what happened in the second quarter of 2020. Obviously we'll be waiting until July to get our answers, but when you consider the reports coming out today that say April consumer spending fell 13.6% in the U.S., we can rest assured there won't be any fireworks in the next round of earnings.

Overall, I favor Disney due to the industry in which it operates and its cheaper pricing. Entertainment on Disney's scale has large barriers to entry. The company charged into video streaming at just the right time, and the expense and market share required to do what it's doing are very hard for smaller companies to afford. Ditto for the amusement parks: Who else can cover the costs to create such engaging and immersive experiences? The parks have taken Disney decades upon decades to build.

Chipotle, on the other hand, competes with the entire food industry. That comprises not just McDonald's (NYSE: MCD) or Yum! Brands (NYSE: YUM) but every dining establishment in the world. And while big players like Chipotle tend to stick around, this is still a space in which far more rivals are competing for a piece of the pie.

Disney is cheaper from a value perspective, and the space that it's in just seems to have more. Streaming is not going away. Content has become the most prized asset in that world, and Disney's long track record of creating profitable content makes it look like a predominant player. After its consolidation of Hulu and Twenty-First Century Fox, coupled with the launch of Disney+, the company might have the power to pass even Netflix (NASDAQ: NFLX).