Shares of Thor Industries (THO -1.14%) were gaining last month as RVs suddenly became hot due to the COVID-19 pandemic. With vacations generally limited and traditional options like cruises or even airline travel unavailable or risky, that leaves limited options for discretionary spending. Reports emerged from a number of sources that RV sales boomed during the month.

Thor also benefited from reopening its North American assembly operations after shutting them because of the outbreak. According to data from S&P Global Market Intelligence, the stock finished the month up 30%. As you can see from the chart below, the stock gained steadily over the month with the exception of a brief setback. 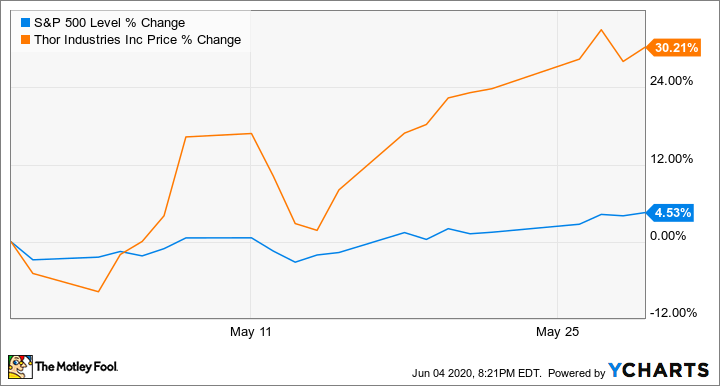 Thor began moving higher on May 5 after the company said that it had begun reopening its assembly operations in North America, though with limited capacity. 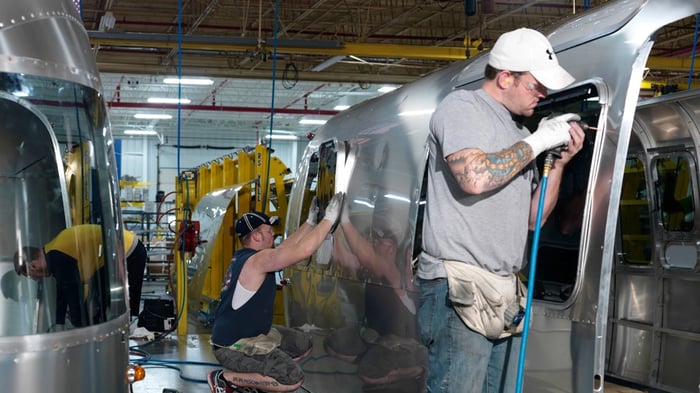 Three days later, the stock jumped 12% after Camping World, the country's biggest seller of RVs, said the first weekend of May was its biggest ever as concerns over the coronavirus were driving record levels of interest and demand for RVs. Thor, the maker of Airstream and other brands, is the world's biggest RV manufacturer.

On May 20, the company released an industry report showing strong interest in RV travel this summer as 79% of RV owners polled plan to use their recreational vehicles at least as much as the year before.

Finally, at the end of the month, the company released an operational update that said most of its facilities were back up and running and that it was seeing strong demand from dealers. Because of that, the company was increasing production volume to meet the higher-than-expected demand.

Shares of Thor, Camping World, and Winnebago all surged last month, showing the boom is lifting RV stocks across the board -- Thor shares are already up double digits in June. This trend won't last forever as the situation around the coronavirus is volatile, but the summer months should still be kind to Thor.

We'll learn more when the company reports earnings on June 8. Though analysts are expecting a dismal third-quarter report due to the shutdowns, investors will want to pay attention to the outlook for the current quarter and any data and commentary on sales heading into the summer.