Please ensure Javascript is enabled for purposes of website accessibility
Log In Help Join The Motley Fool
Free Article Join Over 1 Million Premium Members And Get More In-Depth Stock Guidance and Research
By David Butler – Updated Jun 5, 2020 at 8:25AM

Despite the place that McDonald's french fries hold in my heart, the big wholesale retailer seems like the better choice.

For me, this one is a no-brainer. Costco (COST -0.42%) offers a demonstrated ability to grow that McDonald's (MCD -2.90%) has lacked. Whereas Costco has increased top-line sales consecutively for the last five years, McDonald's has relied on refranchising to drive higher earnings while sacrificing overall revenue potential.

The numbers are pretty easy

Costco averaged 7.1% annual revenue growth over the last four years. Net income growth has been even more impressive, averaging 11.6% through that same time frame. Diluted earnings per share finished 2019 with a 16.5% increase to $8.26 per share. 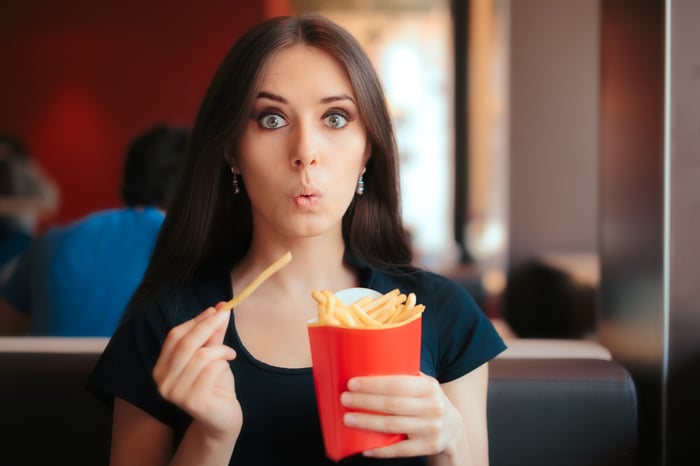 In comparison, McDonald's revenues have averaged an annual decline of 4.51% through the last four years. The longtime restaurant chain managed to increase sales by 0.2% in 2019 to $21.08 billion. Net income through that time frame was more robust, as McDonald's unlocked value by driving down corporate costs through the process of refranchising many of its restaurants. Still, an average of 7.5% was not enough to keep up with Costco.

In terms of valuations, Costco is more expensive on a price-to-earnings basis, trading at 36 times trailing earnings. It also trades at more than 7.9 times its book value. McDonald's, on the other hand, is trading at 24 times trailing earnings, and commands a big premium on a book basis when you consider it carries a total shareholder's deficit on its balance sheet of $9.29 billion, but the stock carries a market capitalization of $138.8 billion.

More recently, we've seen the gap widen between Costco and McDonald's. Costco reported what would be its fiscal third-quarter results on May 28 that included a 4.8% jump in comparable sales, with a 64.5% increase in eCommerce. While the events surrounding COVID-19 did have a $0.47 effect on earnings, it still reported $1.89 per diluted share compared to $2.05 last year. Without that effect from COVID-19, Costco actually produced decent growth year over year.

Of course, it's a bit unfair to be too hard on McDonald's in light of the very trying times that businesses have faced. For me, it's the longer story that sets the two apart. Costco has grown sales and earnings at a higher beat, carries a better value against its balance sheet, and operates in a very indispensable segment of business.

Over the last twenty years, Costco shares have outpaced McDonald's by 86%. In that time, Costco stock has grown by 486% compared to McDonald's 400%. It is worth noting that shares of McDonald's were far more heavily affected by the shutdown compared to Costco, a store where many stocked up on items during the pandemic. Obviously, both of these stocks have been great producers for portfolios, when you compare the gains to the S&P 500's 104% gain through that time frame.

In the end, I have to go with Costco due to the better performance of its business. The retail stock is creating growth that outpaces McDonald's, and it hasn't required refranchising to do it. The top line revenue streams are growing, whereas McDonald's has had to sacrifice revenue potential in order to unlock net income gains for shareholders. Yes, we saw a little more strength from McDonald's in 2019, but it wasn't enough to make it a more compelling play than the wholesaler retail juggernaut. Another issue is the balance sheet. Costco carries over $17 billion in equity, whereas McDonald's is distressed with a balance sheet with a shareholder's deficit over $9 billion.

In the end, this one doesn't seem like a hard choice to make.