Please ensure Javascript is enabled for purposes of website accessibility
Log In Help Join The Motley Fool
Free Article Join Over 1 Million Premium Members And Get More In-Depth Stock Guidance and Research
By Keith Noonan – Jun 5, 2020 at 9:12AM

The enterprise software stock climbed despite an earnings miss and weakened bullish sentiment among analysts.

Shares of Workday (WDAY -0.38%) gained 19.2% in May, according to data from S&P Global Market Intelligence. The stock managed to overcome unfavorable coverage from analysts thanks to momentum for the broader market and first-quarter results that arrived with the announcement of new partnerships. 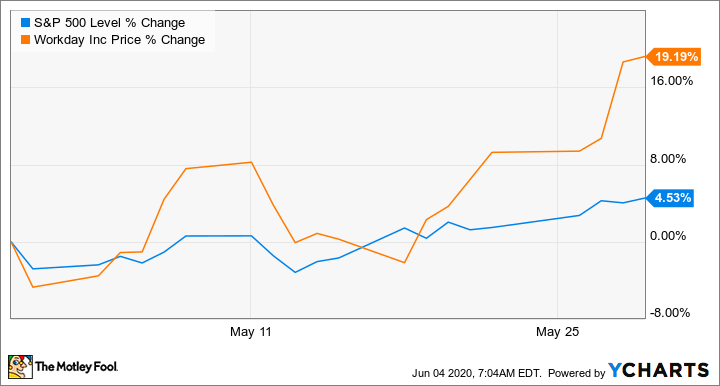 Many analysts published notes lowering price targets and downgrading ratings on Workday stock last month, and the company also published mixed first-quarter results. However, the company still closed out May with double-digit gains thanks to recovery for the broader market and new partnerships announced in conjunction with its quarterly release.

Workday published first-quarter results on May 27, delivering sales that topped the average analyst estimate and earnings that fell short of the market's target. Sales for the period climbed 23.4% year over year to hit $1.02 billion, and non-GAAP (adjusted) earnings rose 2.3% year over year to hit $0.44 per share. The average analyst estimate had called for per-share earnings of $0.49 on revenue of $1 billion.

Workday also lowered its full-year subscription revenue target, but the company also raised its margins outlook and unveiled expanded partnerships with Microsoft and Salesforce.com that helped push its share price higher. The enterprise software company announced that its Workday Adaptive Planning would run on Microsoft's Azure cloud platform, and it also detailed increased service integration with Microsoft Teams and Azure Active Directory. Workday also announced a partnership with Salesforce's Work.com platform, focusing on data sharing and analysis in order to make it easier for businesses to address employee management services created by the novel coronavirus.

Workday stock has dipped roughly 4% in June's trading, while the S&P 500 index has climbed roughly 2.7% across the same stretch. 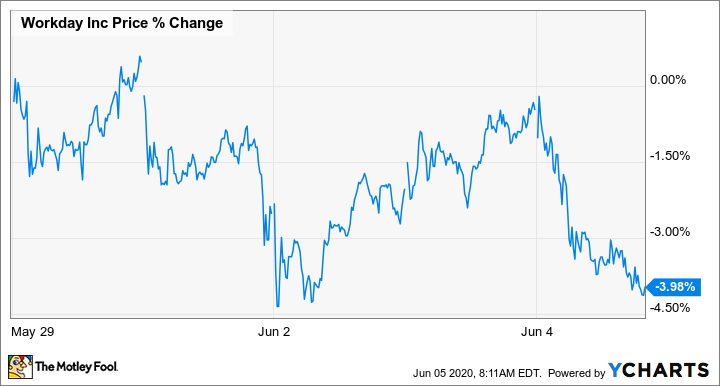 Workday now expects subscription revenue for the year to come in between $3.67 billion and $3.69 billion, down from its previous guidance for sales between $3.755 billion and $3.770 billion. However, the company raised its expected adjusted operating margin for the year from 14.5% to 16%. For the second quarter, management anticipates subscription revenue between $913 million and $914 million, representing year-over-year growth of 20.7% at the midpoint of the target.