Please ensure Javascript is enabled for purposes of website accessibility
Log In Help Join The Motley Fool
Free Article Join Over 1 Million Premium Members And Get More In-Depth Stock Guidance and Research
By Rick Munarriz – Jun 6, 2020 at 7:00AM

A cruise line, a discount retail mall operator, and a restaurant chain might not be at their best right now, but they should lead the way in the pandemic recovery efforts.

We're several months into the COVID-19 pandemic that has sent a chill down the spine of the global economy. There have been some big winners in the new normal, but now might be a good time to start sizing up potential market beaters in the scenario in which we start recovering from the coronavirus. Where will the winners of the new new normal come from?

Royal Caribbean (RCL 16.65%), Tanger Factory Outlet Centers (SKT 7.28%), and Chipotle Mexican Grill (CMG 2.09%) are three stocks that are positioned to thrive in the early stages of an economic recovery. All three stocks have already made big bounces off their coronavirus sell-off lows, but these are investments that stand out as companies in currently depressed industries that will outperform their peers when we start cruising, shopping, and eating out again. 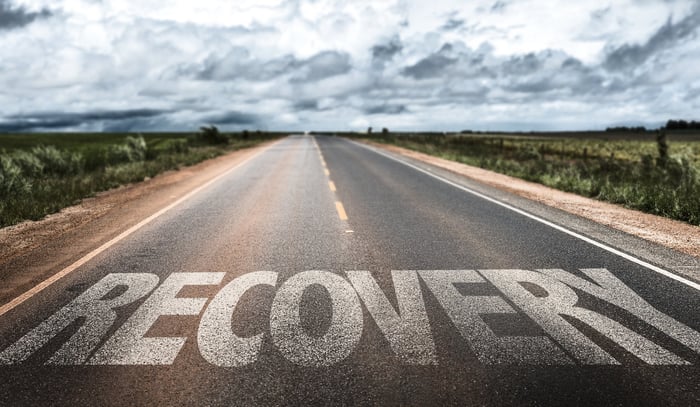 Cruise line stocks have started to bounce back months before their ships start sailing again, making this industry an odd choice to single out as a coronavirus recovery play. It's widely accepted that even in the slammed travel industry, these ships, on which so many cases and fatalities happened earlier this year, will be the last component to bounce back.

Royal Caribbean still seems like the best bet among the three publicly traded cruise lines. It has historically commanded the highest margins of the three players, and it seems well positioned here as the middle child of the industry. The smaller player will be the first to buckle in a prolonged disruption, and the larger player is a discounter that relies on first-time cruisers who aren't likely to set sail anytime soon.

Royal Caribbean stock has tripled since bottoming out in March, but it's still 57% below its January highs. It's the class act in a troubled industry, with $3.3 billion in liquidity to ride out the storm.

Stores are starting to open in some of the states with more aggressive economic recovery stances, and that's good news for Tanger Factory Outlet Centers. We've been scaling back on shopping during the shelter-in-place phase of this pandemic, and no segment has suffered more than apparel. The tenants in Tanger's shopping centers tend to be outlet stores for fashion apparel retailers.

It makes sense that folks aren't stocking up on new clothing when T-shirts and sweatpants will do perfectly fine around the home. However, when the time comes to start going out again, there's going to be heavy pent-up demand for fresh apparel. It's a perfect storm. Recessionary fears are real given the spike in unemployment rates, but personal savings rates are also on the rise. Between stimulus checks and fewer reasons to spend money on outings, consumers might bounce back sooner than expected. Finding good deals on brand-name merchandise -- the heart of Tanger's value proposition -- will be in vogue.

Tanger has also doubled since its early-April lows, and it's been taking some pretty extraordinary measures during the downturn. It's been deferring rent for tenants, and after 27 years of payout hikes, it suspended its quarterly distributions. Not every retailer will make it out of this pandemic, and Tanger will lose a few of its tenants. However, its niche should recover quickly later this year.

Restaurant chains have tried to keep sales coming through takeout and third-party delivery apps, but the industry in general is struggling with in-eatery dining off the table in many states. Most chains saw sharp sales declines in the first quarter, but Chipotle managed to stretch its streak of positive comparable-unit sales to nine consecutive quarters. A 16% decline in comps for March wasn't enough to drag the 12% uptick in January and 17% burst in February into the red for the period.

Chipotle's streak of positive comps will end in the current quarter, but having prioritized digital sales ahead of the pandemic should pay off with a quicker recovery for Chipotle than for its peers. Chipotle's strong market positioning and aspirational brand will make it a winner during the early stages of the recovery, and its enhanced digital initiatives will make it easy to match and ultimately build on its earlier bullish momentum.

Consumer discretionary stocks in general might take some time to bounce back, but investors will fare well by warming up to the niche leaders. Royal Caribbean, Tanger Factory Outlet Centers, and Chipotle Mexican Grill have the right ingredients to lead their respective industries out of the funk.