Please ensure Javascript is enabled for purposes of website accessibility
Log In Help Join The Motley Fool
Free Article Join Over 1 Million Premium Members And Get More In-Depth Stock Guidance and Research
By Jennifer Saibil – Jun 7, 2020 at 11:12AM

Even though sales plummeted in the first quarter, the company is working hard behind the scenes to revive its brand.

With Under Armour's (UA -8.31%) (UAA -9.77%) sales pressured by the COVID-19 pandemic, investors may be wondering whether the company can recover in the aftermath.

But at least one form of effective investing is finding out of favor companies that still hold tremendous potential. Even before the lockdowns, Under Armour had been struggling for several years, but there are some encouraging signs that there's value yet in the business. Here are three signs that a turnaround might be somewhere around the corner.

Under Armour's initial success came from truly innovative products for the athlete. This is still the company's sweet spot, but the advent of athleisure has pulled away a lot of potential customers and handed them to rivals such as Nike and Lululemon. But when customers were forced to stay indoors for a long time, they returned to the fitness expert. 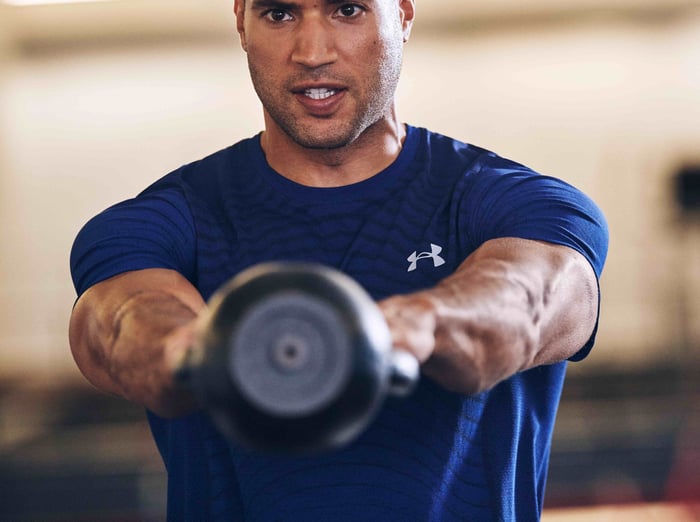 Under Armour maneuvered its new slogan, "The only way is through," to address the current atmosphere as "Through this together." It leveraged its celebrity endorsements to create virtual social events, curated virtual fitness programs, launched a healthy at home fitness challenge, and offered free stuff to engage customers. Since the middle of March, when people first began to stay at home, new app users have almost tripled, increasing 275%.

The record for the number of "MapMyRun" workouts offered through the company's Connected Fitness program has been broken six times, and the Connected Fitness business was up 9%. The connected footwear business is also up with workouts increasing 200% year over year. These numbers should give Under Armour some direction as it plans for the future.

Under Armour is leaning into digital and seeing success

While other companies have been seeing fantastic shifts to digital and e-commerce, particularly Nike, whose digital sales increased 36% year over year in its fiscal third quarter (ended Feb. 29), Under Armour's journey to digital has been more moderate. In 2017, before Under Armour started to lose its brand cachet, it had the largest fitness community in the world. But the company didn't convert its community into sales.

CEO Patrik Frisk said during the first-quarter conference call: "With respect to the emerging shift in consumer behavior, this is a unique time to sharpen our digital knowledge by converting real-time data and analytics to drive brand interest and consideration within our largest categories of training and running." The ideal time to make the push into digital is now.

Although sales were sharply down in the first quarter, there were increased digital sales and improved digital performance in North America, the company's toughest and largest market. The digital segment, and really the business overall, is seeing gains with women, and the company is leveraging that popularity, introducing new technically advanced apparel and other products to target the fitness-minded female.

The company has been moving into digital operationally as well. Digital is enhancing its ability to execute, especially now that management is working remotely. It's also moving toward virtual modeling and sampling, which eases the pressure on the supply chain and allows for a more agile and precise inventory system.

There have been news reports about mismanagement at Under Armour under the leadership of founder Kevin Plank, and perhaps the company got too big too fast. He handed over the reins to Patrik Frisk in 2019, and the new CEO has been able to stabilize and restructure operations successfully.

Frisk has been using data analytics to make better planning and inventory decisions, which helped the team make quick adjustments to its supply plans when COVID-19 first hit China, reducing the negative effects of the outbreak. Most importantly, despite a hostile sales environment on top of already problematic sales trends, Under Armour has been able to keep enough cash on hand to stay liquid throughout store closures. It ended the first quarter with $959 million, of which it still had $700 million as of May 11, and with stores mostly reopened, it appears to have weathered the storm intact.

Under Armour is still a risky stock while in this transition period, but it's a worthwhile bet for investors who believe the company can overcome its recent inertia and become a leading apparel retailer once again.