Please ensure Javascript is enabled for purposes of website accessibility
Log In Help Join The Motley Fool
Free Article Join Over 1 Million Premium Members And Get More In-Depth Stock Guidance and Research
By Jim Halley – Jun 7, 2020 at 5:10AM

Which of these pharmaceutical giants is more likely to provide investors with big gains in 2020?

AbbVie (ABBV -1.29%) and Johnson & Johnson (JNJ -0.61%) are stalwart companies that are in a lot of investors' portfolios. Analysts almost always preach diversification, and these two healthcare stocks bring balance in their own right.

AbbVie is strictly pharmaceutical, but its recent purchase of Allergan really broadens its pipeline beyond the world's top-selling drug, Humira, which treats many auto-immune disorders. Pharmaceutical sales make up slightly more than half of Johnson & Johnson's revenue with its consumer health and medical devices bringing in the rest of its sales.

There's something to be said for sheer size. AbbVie has 47,000 employees and raked in $33.3 billion of revenue last year. The company anticipates likely revenue of $50 billion a year with Allergan under its wing. Johnson & Johnson has more than 132,000 employees and made $82 billion in revenue in fiscal 2019.

So which of these healthcare giants is a better buy for investors today? 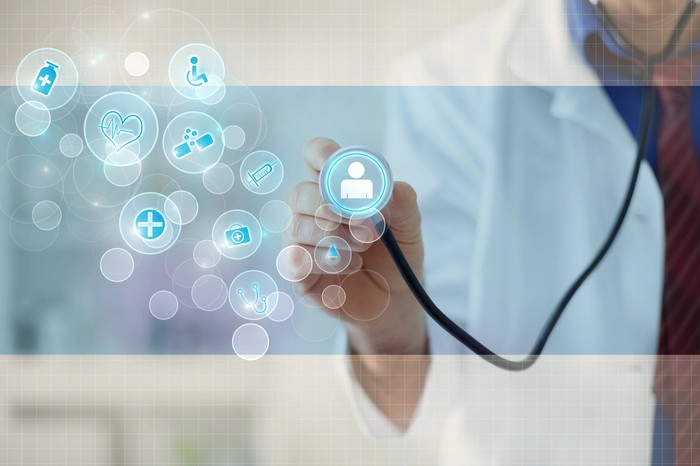 The company is like a tank, rolling over all obstacles in its path. In the past year, it has dealt with opioid-related and talcum powder lawsuits. It stopped making Johnson's Baby Powder last month, citing reduced demand.

The company's first-quarter 2020 numbers show a 3.3% increase in sales, year over year, and a 54.6% rise in net earnings. The company's pharmaceutical and consumer health divisions saw 8.7% and 9.2% revenue increases, respectively.

The Dividend King has increased quarterly dividends for 58 years and recently announced it was raising its quarterly dividend 6.3% to $1.01 a share, a solid yield of 2.73%. The payout ratio is 49.25%, easily sustainable as evidenced by the company's history.

AbbVie boasted more growth recently than Johnson & Johnson and that should accelerate with its purchase of Allergan that was completed in May. In AbbVie's first-quarter report, revenue was $8.6 billion, an increase of 10.1%, year over year. It's still making a lot of money off Humira, nearly 58% of its revenue, despite increased biosimilar competition in Europe. First-quarter Humira numbers were $4.7 billion, up 14.5% reported compared to the same quarter in 2019.

AbbVie's other big sellers inlcude Imbruvica, a cancer drug with $1.2 billion in quarterly net revenues, up 20.6%, compared to the same quarter in 2019. Venclexta, a treatment for adults with chronic lymphocytic leukemia (CLL) or small lymphocytic lymphoma (SLL), had net revenues of $317 million. Its plaque psoriasis drug Skyrizi brought in $300 million.

Buying Allergan gives AbbVie Botox, a cash cow that made the former company $1.02 billion in sales in the fourth quarter, with slightly more than 55% of that from therapeutic uses and 45% from cosmetic use. Another former Allergan drug, wrinkle-filler Juvederm, will help with AbbVie's bottom line as well. In the fourth quarter, it brought in $347.3 million.

Also a Dividend Aristocrat, AbbVie has increased its dividend 195% since the company was spun off from Abbott Labs in 2013. This year, it raised its quarterly dividend to $1.18 per share. The dividend's yield is outstanding -- 5.18% trailing twelve months (TTM) with a payout ratio of 44.73%.

The company confirmed it expects stand-alone adjusted diluted earnings per share for the full year of $9.61 to $9.71, representing growth of 8.1% at the midpoint.

At this point, AbbVie appears to be a better deal

Of course, it's not that simple. Johnson & Johnson is likely the safer bet. Two things concern me about AbbVie. How will it respond when Humira likely begins facing biosimilar competition in the U.S. in 2023, and how well will the company integrate Allergan this year?

Another big shift would be if Johnson & Johnson's COVID-19 vaccine candidate is successful. The company plans to spend $1 billion on the effort and plans to begin a phase 1 clinical study in September, with clinical data available by the end of the year.