Please ensure Javascript is enabled for purposes of website accessibility
Log In Help Join The Motley Fool
Free Article Join Over 1 Million Premium Members And Get More In-Depth Stock Guidance and Research
By Scott Levine – Jun 7, 2020 at 11:56AM

While many businesses struggled in the first quarter, this one flourished.

Soaring more than 79% through the first four months of 2020, shares of Enphase Energy (ENPH 2.63%) have been a bright spot in investors' portfolios during a time when clouds have hung on many other stocks. During the same period, for example, the S&P 500 had plunged 10%. And Enphase distinguished itself even more so in May -- a month in which the stock rose 24.3%, according to data from S&P Global Market Intelligence, while the S&P 500 climbed 4.5%.

Besides a strong earnings report, investors rejoiced at the company's sunny outlook for the second quarter. In addition, several votes of confidence from Wall Street motivated investors even more through the month. 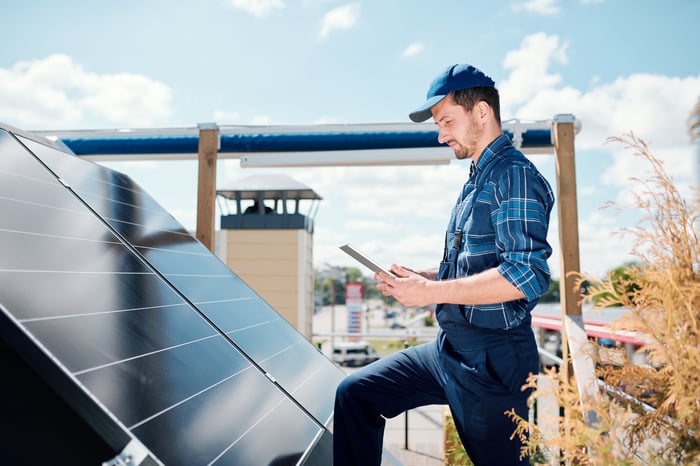 While the global spread of COVID-19 devastated a number of businesses in the first quarter, Enphase Energy reported an impressive start to the year. On the top line, Enphase reported $205.5 million, reflecting a year-over-year increase of 105%. The company's success in reigning in costs, however, is where it shined even brighter. Breaking company records, Enphase reported a GAAP gross margin of 39.2% and an operating margin of 21.8%. And management seems optimistic that the company will continue to thrive in the second quarter -- a period in which it forecasts Enphase will generate a gross margin of 37% to 40%.

Shareholders found another reason to celebrate as Enphase generated $39.2 million in operational cash flow, representing a 130% increase over the $17.1 million it reported in the first quarter of 2019.

A company's ability to expand its gross margin will come to the delight of any investor, but in the case of Enphase Energy, it's particularly noteworthy since many renewable energy-focused suppliers are often forced to consistently lower prices in order to remain competitive.

Additionally, management's forecast that it will sustain this level of profitability in the second quarter suggests that the company's feat in the first quarter wasn't a fluke. Will management make good on its projection? It's one of the things that I -- and I'm sure many other investors -- will be watching when the company reports second quarter earnings.