T-Mobile has a combination of defensive and offensive qualities that makes it especially intriguing in the age of 5G.

The telecom sector is not known for being the most exciting sector out there. After all, almost everyone in America now has a wireless plan, and there's really not much difference among the major carriers in terms of network coverage and speeds. That means there's not much pricing power or industry growth, making the major U.S. telecom companies steady but unspectacular investment.

That is, with the exception of T-Mobile (TMUS 0.06%), which is doing everything under its power to make wireless an exciting growth story once again. That's especially true in the 5G era, and now that the company has closed its acquisition of Sprint. The recent tie-up has given the combined company hidden growth potential, which could make T-Mobile a potential home run stock with less risk than many other investment options. Here's why. 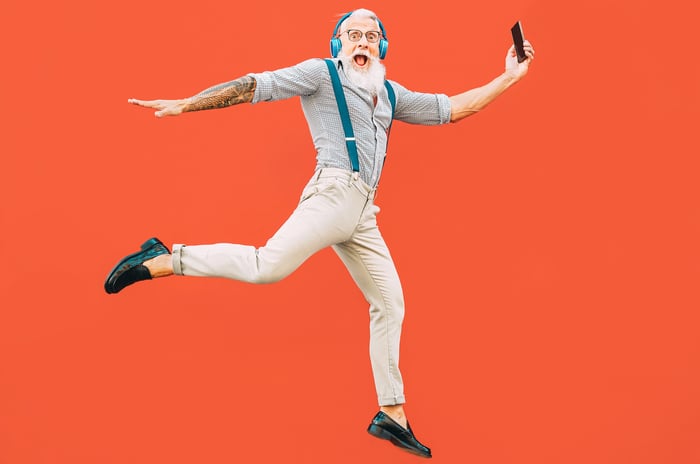 A value carrier in uncertain times

Ever since its spinoff from Deutsche Telekom (DTEGY 1.55%) and initial public offering in 2013, T-Mobile, under former CEO John Legere, has led an insurgent campaign in the telecom industry as the "Uncarrier," with the aim of shaking up the status quo and solving customer pain points.

The wireless industry at that point was dominated by Verizon (VZ -0.19%) and AT&T (T 0.54%), and this duopoly had regularly charged customers hidden fees, overage charges, and other forms of high-profit gouging. T-Mobile did away with many of these typical industry practices, such as offering lower prices, giving customers free talk, text, and 2G data in foreign countries, and a host of other features. Most notable was T-Mobile's introduction of 100% unlimited data plans in January of 2017, which soon prompted all of the other carriers to follow suit, proverbally "kicking and screaming" as T-Mobile continued to take market share. In conjunction, T-Mobile included all taxes and fees in its advertised prices, essentially giving customers a discount.

Despite other carriers following and trying to match T-Mobile's offer with their own unlimited plans -- albeit at higher price points -- T-Mobile continued to take market share from the industry and lower its overall churn. 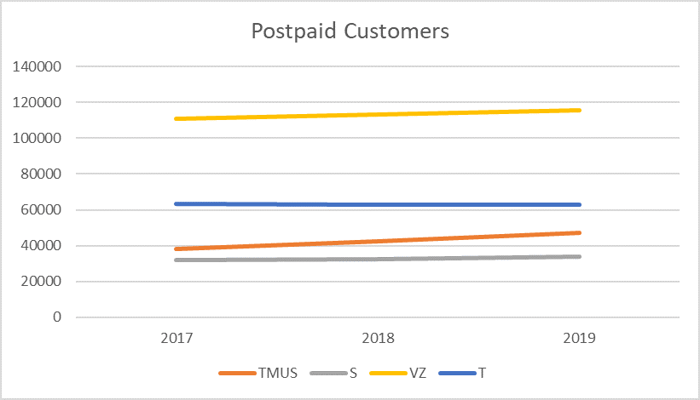 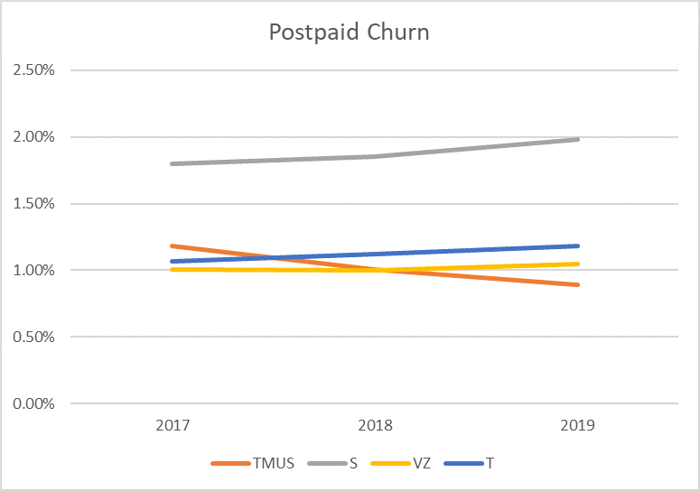 As you can see, T-Mobile's customer-friendly practices have clearly made it a favorite, as its network has come close to parity with Verizon and AT&T over time. The formula of an improving, good-enough network and lower prices allowed it to rack up net additions and lower its churn to an industry-leading 0.89% in 2019.

Armed with Sprint spectrum, T-Mobile can take the fight to another gear

While T-Mobile was already winning the wireless fight in 4G, with a good-enough network and lower prices, the combination with Sprint as the industry builds out 5G is the real reason T-Mobile looks so compelling today. That's because the acquisition of Sprint's 2.5 GHz mid-band spectrum, along with T-Mobile's purchase of nationwide 600 MHz low-band spectrum for a whopping $8 billion in 2017, has given the combined company the potential to now have the a better nationwide network than competitors -- not just the lowest-cost plans.

In December, T-Mobile began deploying its 5G network nationwide on the low-band 600 MHz spectrum, covering more than 200 million people and more than 5,000 cities.  Of course, low-band 5G doesn't give customers the ridiculous speeds to deliver next-gen applications over millimeter wave (mm-wave) spectrum. Nevertheless, T-Mobile's low-band 5G should be a material increase in speeds compared to 4G, and it will be nationwide.

Meanwhile, T-Mobile also has mm-wave spectrum that can give consumers the very highest 5G speeds that many discuss when talking about the groundbreaking potential of 5G. However, mm-wave is very costly, doesn't go very far, and also has trouble penetrating surfaces. While Verizon has the most mm-wave spectrum and has been deploying it first, with the highest current speeds, users can only access its network in the single-digits percentage of the time in the areas in which it's deployed.

I like T-Mobile's strategy of starting with the most coverage first, before boasting about having the highest 5G speeds, a crown which currently belongs to Verizon. After all, what good is having lightning-fast mm-wave speeds if you can almost never access the network? In addition, mm-wave speeds of nearly 1 Gbps is really overkill for most of today's applications. For the super-cool 5G applications many futurists talk about, it will be necessary at some point. But those days are a long way off. Most people don't even have their first 5G phones yet. Between now and then, T-Mobile should be able to catch up for maximum speed crown in crowded city centers.

But until then, T-Mobile is trouncing both Verizon and AT&T in terms of 5G coverage on the mid-and low-band spectrum. According to management, the new T-Mobile's combined low and mid-band spectrum is double that of AT&T and triple that of Verizon. T-Mobile also has even more mm-wave spectrum than AT&T, though not as much as Verizon.

That should actually give T-Mobile a superior initial 5G network in the immediate future, since Verizon and AT&T will actually have to buy more spectrum, clear it, and deploy it in order to keep up. In the recent conference call with analysts, new CEO Mike Sievert put it very succinctly: "we're building the best network at the best value. No one's ever been able to offer that before, the lowest prices and the best network."

Thus, as 5G comes on, I'd expect the combined T-Mobile-Sprint to continue to take more and more market share above the roughly 30% share of the combined companies.

Not only should the new T-Mobile take much more wireless market share, but looking even further out, T-Mobile is also looking to give cable providers a run for their money in home broadband as well.

Last March, T-Mobile rolled out an LTE-based home broadband pilot project in select geographies. Now armed with Sprint's 2.5 GHz spectrum, T-Mobile management claims it will be able to offer 100 mbps -- fast enough for all the streaming HD 4K video you'll need -- to 90% of the U.S. population by 2024. By that time, T-Mobile is aiming for 9.5 million broadband customers at a price of $50 per month, far lower than the average $80 price for unbundled broadband services today.

Assuming T-Mobile hits those goals,  it would mean another $5.7 billion in annual revenue, and likely at high margins, given the profitability of the broadband industry today. That $5.7 billion would amount to about 10% over T-Mobile's and Sprint's combined service revenue last year, making home broadband a significant growth seed.

T-Mobile is a buy

Of course, most consumers probably aren't even aware of the network differences at this point, as 5G is still in its infancy. And most certainly don't comprehend the potential cheaper broadband product coming down the line. In addition, T-Mobile has a history of beating synergy targets, as it outperformed in its integration with MetroPCS back in 2013. That means it's a good bet to beat the $6 billion in cost savings it's forecasting in its integration with Sprint.

While many value stocks have rallied hard over the past month, it's quite possible they may be running out of gas, especially if economic reopening underwhelms and COVID-19 cases continue to rise.

If you fear that may be the case, with the market almost fully recovered from February, a defensive telecom stock like T-Mobile could make for an excellent buy right now. After all, it also has long-term offensive growth potential as well, thanks to 5G and the potential to disrupt the highly profitable broadband sector. That combination makes it an excellent choice for risk-off investors.