Please ensure Javascript is enabled for purposes of website accessibility
Log In Help Join The Motley Fool
Free Article Join Over 1 Million Premium Members And Get More In-Depth Stock Guidance and Research
By James Brumley – Jun 7, 2020 at 9:45AM

The company didn't leap into the 21st century, but it's now making up for lost time.

It's the owner of some of the most recognizable consumer brand names in the world. Procter & Gamble (PG -0.46%) is the parent to Tide laundry detergent, Gillette razors, and Luvs diapers, just to name a few. These have been premier go-to brands for years, if not decades.

Nothing last forever, though, particularly for companies that don't adapt. Between young people's interest in brands other than the ones preferred by their parents and the advent of the internet making it easy to find those alternatives, P&G's dominating size eventually became a liability. Nimbleness matters. People want a more personalized connection with the manufacturer of their consumer goods.

The thing is, Procter & Gamble is finally moving in that direction. It has been, in fact, for years. It's just taken time because P&G is a huge, complex company that has to rebuild its culture, supply chain, product design approach, and marketing efforts from the ground up. It will take even more time to finish the job. Five years from now, though, the new and improved Procter & Gamble might well have restored its former glory. 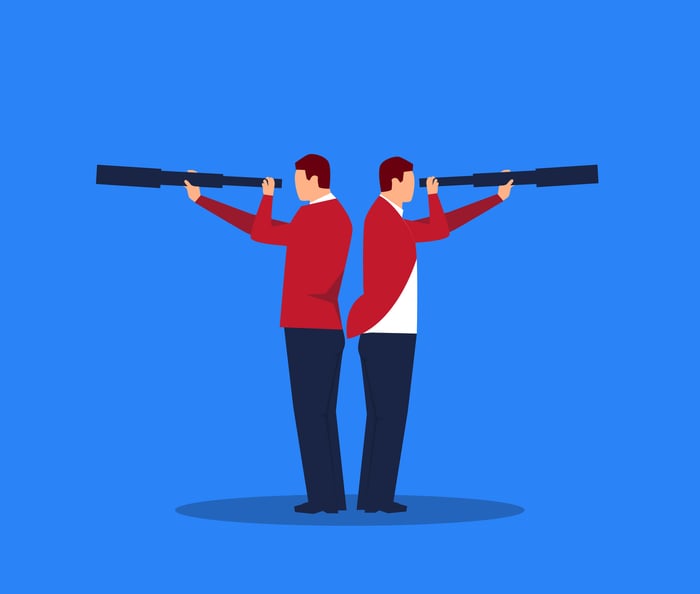 Thank now-former CEO A.G. Lafley, who expanded the company's size during his first stint as chief executive between 2000 and 2009, ultimately more than doubling the number of brand names the company owned. When he was rehired as CEO in 2013, he'd changed his mind (at least to some degree). By 2014, Lafley led the company to begin selling more than half of its product brands and focus on the remainder that accounted for 90% of revenue and 95% of sales.

By the time he stepped down in 2015, much of that divestiture work had been done, including the $12.5 billion sale of much its beauty business to Coty that would be consummated in 2016 shortly after David Taylor took the helm. Taylor's task was mostly to steer the newly restructured, slimmed-down organization into the modern era, and he's moved decidedly in this direction.

Case in point: The company's marketing effort has been overhauled in a big way. Taylor explained during the fiscal year-end conference call held on July 30, 2019, "We are going from generic demographic targeting, like women aged 18 to 35, to more than 350 precise smart audiences, like first-time [moms], millennial professionals or first-time washing machine owners, to help us reach the right people at the right time, in the right place."

It's not just a new kind of marketing, though. Product innovation has adapted, too. Chief among its changes is that Procter & Gamble is doing more of it. For example, in 2018 the company embraced the idea of products made with natural components rather than artificial building blocks. It's also becoming something of a hit at the annual Consumer Electronics Show held in January, a venue generally dominated by decidedly tech-focused companies. At this year's show, P&G touted a baby monitoring system managed by a smartphone, a robot that delivers toilet paper to you while you're in the bathroom, and more.

Taylor's even bucked the long-standing trend of promoting almost solely from within the company by encouraging the hire of external candidates that bring a new perspective with them.

The rebuild is working. After 2017's revenue headwind and a profit headwind in 2018 and 2019, both sales and earnings are finally on a growth trajectory. That was the case before the coronavirus rattled the world and disrupted supply chains anyway, and it will likely be the case once the COVID-19 contagion is in the rearview mirror.

The kind of overhaul being implemented is the sort of work that can take years to finish, though, and the Taylor-led Procter & Gamble isn't yet finished. As much growth as the company has mustered just since he's taken over, the best is yet to come. Analysts are calling for sales growth of 3.5% this fiscal year, and while next year's estimated revenue growth of 1.4% is far from thrilling, bear in mind the company's developed something of a penchant for beating estimates. By 2025, the reinvented P&G could easily be the consumer staples powerhouse it was a couple of decades ago, nearing $80 billion worth of annual sales. The dividend, which currently yields 2.67% of the stock's price, isn't likely to be threatened in the meantime, either. 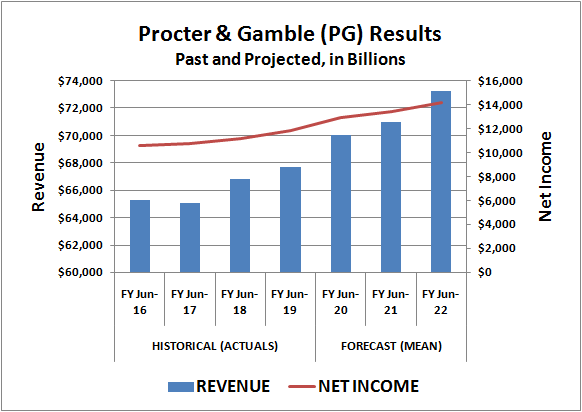 Data source: Thomson Reuters/Refinitiv. Chart by author. All dollar figures are in billions.

It's certainly a very compelling bullish case for investors willing to stick with it that long.