Northrop was always going to win this one, and now we know how much it won for phase one.

In August, NASA announced that blue chip aerospace giant Northrop Grumman (NOC -0.03%) would be the only company allowed to compete for a sole-source contract to build a "minimal habitation module" to accommodate astronauts serving aboard its planned Lunar Gateway space station orbiting the moon. At the time, NASA had not technically awarded the contract to Northrop, but with no one else allowed to bid, the contract appeared to be Northrop's by default. And now it is. The contract win was announced last week. 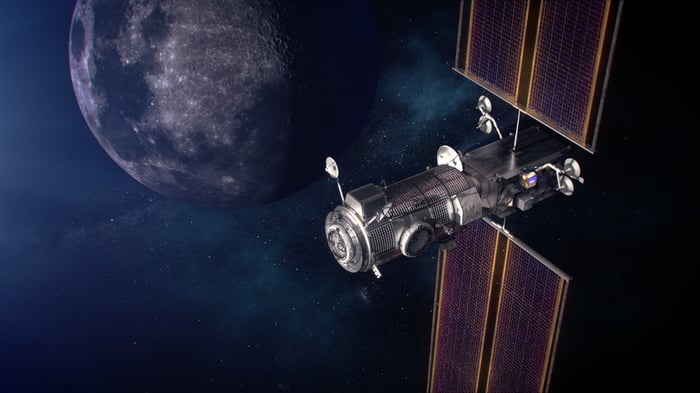 NASA describes the habitation and logistics outpost (HALO) as "the pressurized living quarters where astronauts will spend their time while visiting the Gateway." Derived from the Cygnus cargo capsule that Northrop already builds for supply runs to the International Space Station, the HALO is described as "about the size of a small studio apartment," and is designed to be used in tandem with the Orion spacecraft that carries astronauts to the Gateway.

On Friday, NASA confirmed that it had awarded the HALO contract to Northrop. For an initial $187 million, Northrop will "design the habitation and logistics outpost (HALO) for the Gateway." Subsequently, and presumably for much more money, Northrop Grumman will actually build the HALO.

Preliminary design work (the first contract) is expected to wrap up before the end of this year. Construction of the HALO, and its integration with the Gateway's power and propulsion element (PPE) that Maxar Technologies is building, should happen by the end of 2023. Then the unified spacecraft would be launched to the moon that same year.

NASA has not yet chosen a contractor to conduct the launch, but that decision should also be reached before the end of this year.