After significant COVID-19 headwinds, are things now looking up for Zillow?

That move sent the stock from $44 per share to $58 per share during the month. This comes on the heels of Zillow's 28% surge in April.

On May 7, Zillow Group reported first-quarter results that were better than expectations. The company's core Premier Agent business accelerated its revenue growth to 11% year over year, up from 6% in the fourth quarter. Impressively, this included a 4.6% headwind from delayed revenue recognition related to the company's testing of its Flex pricing business model in certain markets.

Under the Flex model, high-performing agents receive Zillow's buyer leads at no up-front cost, but Zillow receives a cut of the agent's commission if or when those leads become real estate transactions. In the Flex test markets, Zillow is intentionally deferring up-front revenue in favor of revenue later on upon closings. Without that revenue deferral, the Premier Agent business would have grown revenue closer to 16% compared to the 11% it actually grew. That's impressive, and a rapid improvement from the 3% rate at which the Premier Agent business grew last year. 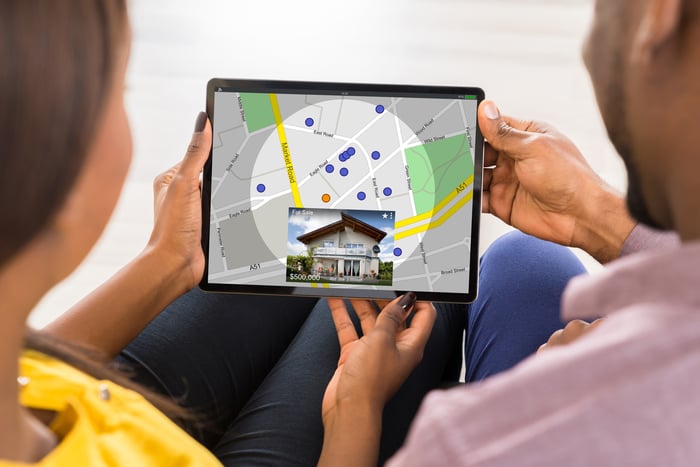 Additionally, Zillow had a great quarter selling Zillow-owned homes in the Zillow Offers business. The company sold 2,394 homes and purchased 1,479 before temporarily pausing home buying in March and ended the quarter with 1,791 homes in inventory. That net home selling raised about $300 million of cash during the quarter.

Certainly, the company is still going through a rough patch due to COVID-19, but things are beginning to look up. Site traffic and buyer demand plummeted in March but has since bounced back strongly. That said, Premier Agent revenue is expected to drop 30% sequentially due in part to discounts the company offered to agents in order to support agent retention.

During May, Zillow also raised additional capital to improve its already-strong liquidity position. It sold eight million new shares of Class C common stock at $48 per share and another $500 million of 2.75% convertible senior notes that come due in 2025. The company ended March with $2.6 billion of cash and short-term investments, so these offerings only add to that substantial cash cushion.

Finally, Zillow also announced it is relaunching home buying under the Zillow Offers business in another nine markets. Most investors hadn't expected a return to home buying so quickly.

While no one knows where the economy or real estate market will go, Zillow is well-positioned to endure. The company now has well over $3 billion of cash and short-term investments on the books and has significantly reduced its operating costs due to COVID-19. That's why investors should consider Zillow a high-growth stock that's just getting started.