Please ensure Javascript is enabled for purposes of website accessibility
Log In Help Join The Motley Fool
Free Article Join Over 1 Million Premium Members And Get More In-Depth Stock Guidance and Research
By Zhiyuan Sun – Jun 9, 2020 at 11:15AM

Kezar Life Sciences just released interim results on its only drug and shares jumped 70%. Now that the stock has settled, is it a good time to buy?

On June 4, small-cap biotech company Kezar Life Sciences (KZR -0.12%) announced updated phase 1/2 results from a clinical study evaluating KZR-616 for the treatment of patients with systemic lupus erythematosus (SLE) with and without lupus nephritis (LN). Investors seemed to like the data. By the market's close, shares were up 73.38% to $7.75, pushing the company's market cap toward $300 million. The following week, shares had settled back down to $5.58.

Will the company become a maverick in developing a therapeutic candidate for this significant medical need? Let's find out. 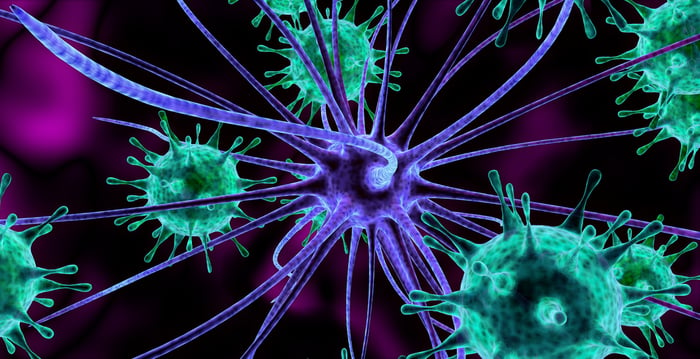 KZR-616 is a first-in-class selective immunoproteasome inhibitor and is Kezar's only experimental drug to make it to the clinical trial phase to date. The company calls it "A novel approach to harmonizing the immune system." In addition to SLE and LN, the drug is being investigated in four other autoimmune indications, including dermatomyositis, polymyositis, autoimmune hemolytic anemia, and immune thrombocytopenia. There are few to no approved treatments for these indications in the U.S. and EU, and together they have an addressable patient size of 360,000 in the U.S. alone.

All of KZR-616's clinical trials are currently in phase 1/2. The company expects data from all studies except for the SLE/LN one to release top-line data beyond 2021. For SLE/LN, interim top-line data in the 39 patient trial was released on June 4.

In one cohort, two out of two patients with LN reported a 50% reduction in proteinuria as measured by the urine protein to creatinine ratio (UPCR). However, whether or not this value is indicative of efficacy is heavily debated. Currently, the U.S. Food and Drug Administration (FDA) requires experimental drugs targeting LN to demonstrate complete renal response as a prerequisite for approval. One of the metrics in the complete renal response endpoint is that patients' UPCR should be less than 0.5 mg/mg to qualify.

Unfortunately, neither of the two patients who received KZR-616 saw their UPCR levels fall below 0.5 mg/mg after treatment. It is well known that 30% to 50% of patients who are administered standard-of-care drugs for treating LN will demonstrate a 50% reduction in UPCR post-treatment. Hence, whether or not KZR-616 can match or beat the efficacy of current standards of care remains to be seen.

Meanwhile, 16 evaluable patients with SLE did demonstrate significant reductions in seven metrics: disease activity, disease severity, tender joint count, swollen joint count, and three assessments of disease progression. Hence, Kezar may be on to something here with its investigation of KZR-616.

Is the company a buy now?

The company is expecting further interim data releases throughout the year, including from one cohort of patients who received placebo. Also, Kezar has more than $123 million in cash and investments on its balance sheet, which is more than enough to offset its operating loss of $10 million per quarter. Hence, investors shouldn't expect any stock dilution until the company completes the phase 1/2 clinical trial for KZR-616 in treating SLE patients with or without LN.

Overall, I am cautiously optimistic regarding the potential of KZR-616 in treating those patients. For starters, it was able to demonstrate efficacy (albeit without statistical verification) in at least 16 patients with various forms of SLE so far. Also, it could reduce patients' UPCR level to 0.6 mg/mg after a long treatment course (but not below the 0.5 UPCR threshold the FDA requires), and results from the placebo cohort are still pending. Hence, investors with a high tolerance for failure may wish to open a position in Kezar in anticipation of full positive phase 1/2 results.

Why Kezar Life Sciences Is Down Today