That's the finding of a clinical trial of ABBV-3373, a new type of antibody-drug conjugate.

AbbVie (ABBV -5.96%) has a solution for the loss of patent protection on its blockbuster drug Humira: ABBV-3373, a souped-up version of the monoclonal antibody that's quite literally Humira on steroids; it's Humira, an antibody that targets tumor necrosis factor (TNF), connected to a glucocorticoid receptor modulator (GRM) steroid.

In a phase 2a clinical trial, ABBV-3373 reduced the Disease Activity Score 28 C-Reactive Protein (DAS28-CRP) -- a measurement of the severity of rheumatoid arthritis disease -- by 2.65 points, compared to a decline of 2.13 points for patients who were given Humira in other clinical trials. The phase 2a study also had some patients on Humira, and when data from those patients was combined with the historical Humira data, Abbvie calculated that there was a 90% chance that ABBV-3373 was associated with a greater improvement in DAS28-CRP than Humira. 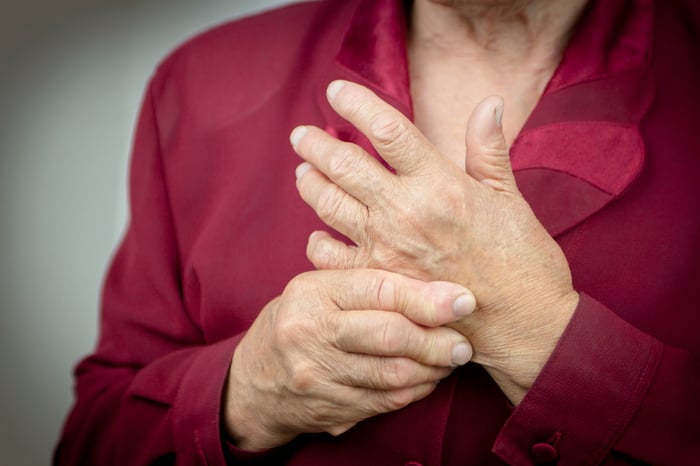 Antibody-drug conjugates have been used for decades to treat cancer by using an antibody to target a toxic payload to tumor cells. But AbbVie is using the technology to target a molecule -- the GRM steroid that is anti-inflammatory -- to activated immune cells while still blocking the pro-inflammatory TNF protein. By specifically targeting activated immune cells, the drugmaker hopes to dampen the systemic side effects seen with glucocorticoid steroids.

A few other companies are developing antibody-drug conjugates where the additions aren't the traditional toxic payload. Privately held Bolt Biotherapeutics and Silverback Therapeutics, for instance, are using antibodies to target tumor cells and attaching molecules that can stimulate immune cells to attack the cancerous ones. And Avidity Biosciences, which has filed to go public under the ticker RNA, is attaching oligonucleotides to antibodies in order to target them to specific cells in the body.