Please ensure Javascript is enabled for purposes of website accessibility
Log In Help Join The Motley Fool
Free Article Join Over 1 Million Premium Members And Get More In-Depth Stock Guidance and Research
By Zhiyuan Sun – Jun 10, 2020 at 9:39AM

Here's why this biotech company with a promising treatment for a rare blood disorder is a solid buy.

Investing in biotech stocks focused on experimental oncological therapies is risky enough. What's even more perilous is buying a biotech stock that will make or break on one such candidate alone. Indeed, the probability that an experimental candidate can progress from phase 1 to approval stands at only 10%.

Although it can seem risky to invest in small-cap companies, this goes against one of Warren Buffet's core investment principles: "We simply attempt to be fearful when others are greedy and to be greedy only when others are fearful." Today, let's look at one such company, Aprea Therapeutics (NASDAQ: APRE), and why it is more likely than not to advance its only possible cancer treatment to market, and subsequently deliver riches for investors. 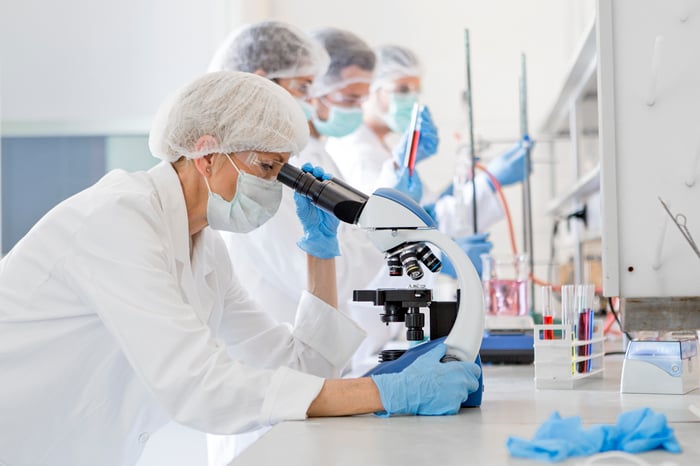 What does Aprea have?

Currently, Aprea has only one leading candidate in its pipeline -- APR-246. It's a small molecule designed to reactivate the mutant p53 tumor suppressor protein that is expressed in the most common mutated gene in cancer (in more than 50% of cases), the TP53 gene.

The drug is being investigated in targeting a series of disorders involving deficiencies in producing blood cells and platelets called mutant myelodysplastic syndromes (MDS). There is currently no known cause as to why patients develop MDS in most cases. If untreated, MDS could progress into acute myeloid leukemia (AML), an aggressive and fatal form of blood cancer. Azacitidine, a chemotherapy drug, is usually given as a standard of care for treating MDS despite having a limited efficacy. There are approximately 15,000 to 20,000 newly diagnosed cases of MDS in the U.S. each year.

How is efficacy against MDS measured?

The drug is currently in phase 3 clinical trials for targeting MDS and in various phase 1/2 clinical trials for targeting AML. On June 3, Aprea announced it completed enrollment for the phase 3 study and top-line results are expected by the end of 2020. The investigational goal of Aprea's phase 3 clinical trial requires patients taking APR-246 to demonstrate a 25% to 50% superiority in the CR rate of MDS after treatment compared with patients who are given azacitidine.

Is this goal achievable?

At first glance, the 25% to 50% superiority requirement of the trial may seem like a lot. In context, however, there is more than meets the eye.

In azacitidine's phase 3 clinical studies, only 15.7% of the 89 patients who took the drug demonstrated an objective response, with a CR rate of 5.6% and a PR rate of 10.1%, respectively. The median time it took for patients to reach a level of PR or better was 330 months.

Even though APR-246 has not had its efficacy verified against azacitidine alone, the benefit in response rates and its median time to response compared to historical studies indicate the drug has a high probability of meeting its benchmark in its phase 3 clinical trial. If it's successful, I anticipate the company will file for a New Drug Application by the end of 2021. Keep in mind, the global market for treating MDS is estimated to worth more than $2.4 billion in 2022. Meanwhile, the company has a market cap of only $550 million.

Interestingly, Gilead Sciences (GILD 3.99%) is also developing a potential therapy for treating MDS which has demonstrated similar overall response rates as APR-246 in phase 1b. Hence, a takeover of Aprea by Gilead is definitely on the table as the former is in a later stage of investigation. Aprea currently has only one manufacturing partner for APR-246, and could benefit from the expertise of a large-cap pharma company in the event of commercialization.

What's more, Aprea has more than $120 million in cash and no debt whatsoever. It is also running at a quarterly net loss of $11 million, meaning the company will not have to raise cash via stock offerings until the end of its investigation. Overall, I think it is highly likely the company will be successful in bringing APR-246 to market for at least one indication. Hence, this is a great stock to check out for biotech investors looking for companies in the sector with a high potential for growth.

2 Biotech Stocks That Could Soar in 2020

These 4 Biotechs Have Selling Pressure on the Horizon

Are These 3 Recent Biotech IPOs a Good Deal for Investors?