The automaker's launch into mass market electric vehicles is delayed for the second time.

Volkswagen AG (VWAGY -4.69%) has delayed the launch of its ID.3 model electric vehicle until at least September, according to a Wall Street Journal report. The German car company has billed the ID.3 as a mass market car it hopes will mirror the popularity of its other iconic brands, like the Beetle and Golf. It is calling its upcoming lineup "electric vehicles for millions, not just millionaires," in an apparent swipe at category leader Tesla.

Software problems have delayed the release of the early version of the ID.3 until September, and a full-feature model that will install connected apps for infotainment and digital assistants among other functions, won't be available until the end of the year, according to the Journal report. 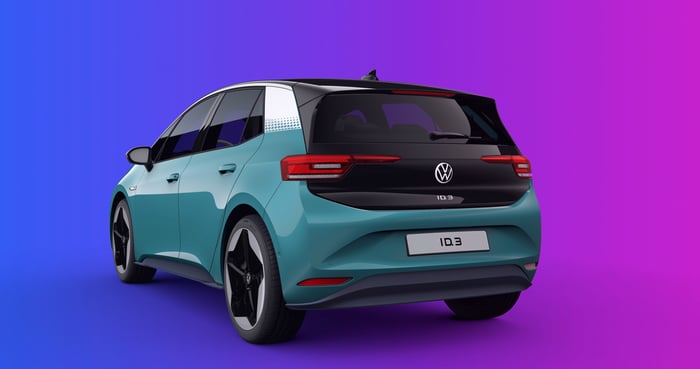 This week, Volkswagen announced a shuffle in management responsibilities, with CEO Herbert Diess relinquishing his role as chief of the VW brand. The company's brands include VW, Porsche, Audi, Lamborghini and Bentley. The delays in the launch of the ID.3 electric vehicle played a role in the board's decision, according to the Journal report.

The new vehicle's software is supposed to provide system updates similar to how Tesla cars already work. Volkswagen has been working with Microsoft on its cloud-based applications, but has not had success in establishing a "robust link" to allow the real-time updates, according to the Journal.

All of the company's brands are working on developing electric vehicles, and the Volkswagen brand is aiming to make 1.5 million electric vehicles annually by 2025. For perspective, Tesla said in its first-quarter 2020 report that it has the capacity to exceed sales of 500,000 electric vehicles for 2020.