Please ensure Javascript is enabled for purposes of website accessibility
Log In Help Join The Motley Fool
Free Article Join Over 1 Million Premium Members And Get More In-Depth Stock Guidance and Research
By John Ballard – Jun 11, 2020 at 8:06AM

It's the biggest video game deal the NFL has ever made.

Take-Two Interactive (TTWO) surprised many in March when it announced a new partnership with the NFL to create a series of football games starting in calendar 2021. That left some investors wondering about the fate of Electronic Arts' (EA) exclusive agreement with the NFL that it has held since 2004. 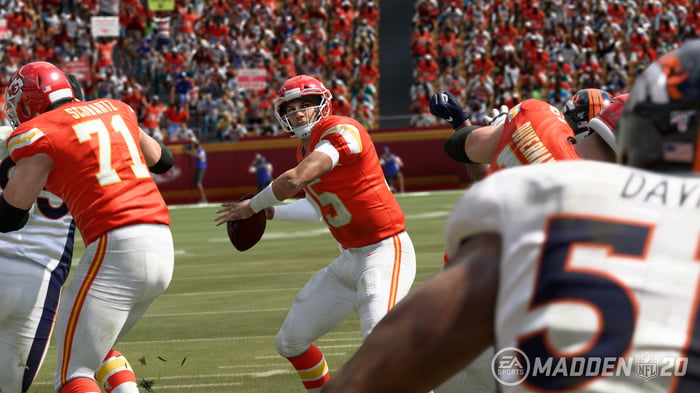 The NFL is in growth mode

The NFL has experienced back-to-back seasons of rating increases through the 2019 season, and it clearly sees interactive entertainment as an important way to grow viewership with a new generation.

In a statement, NFL commissioner Roger Goodell said: "The expansion of this partnership is not only about the continued success of the Madden NFL franchise but also the creation of new avenues for our fans to connect with the sport they love."

Along with the increased viewership of real NFL games, the Madden franchise is coming off its best year in EA's history. Since the launch of Madden NFL 20 in August 2019, unique players are up 30% year over year and monthly average users are at an all-time high, as EA disclosed in a press release on May 28.

In April, player levels in Madden have nearly doubled year over year, which reflects the boost EA has experienced with more people at home during the COVID-19 pandemic.

On May 5, EA reported an increase in digital net bookings of 9% year over year for fiscal 2020 (which ended in March), driven by high engagement across the company's premium titles, including Madden.

Now, the NFL is giving EA even more ways to create interactive experiences that could see further growth for both parties.

Madden could see tremendous growth over the next five years

EA will be making a variety of games with "more forms of play and self-expression" across new genres, including new games on mobile devices. The new agreement also provides EA with an opportunity to grow Madden esports, with more competitive events and broadcast content. Higher interest in esports can help grow live services spending, such as the Ultimate Team digital card game in EA's sports titles that comprises nearly a third of EA's annual revenue.

This new partnership comes at the right time. The new consoles are launching from Sony and Microsoft later this year, and EA seems to have some new ideas up its sleeve to create higher interest in Madden. In the press release, EA stated: "This partnership will also focus on design, visualization, and development innovations to grow and deepen the world of Madden NFL, impacting how it plays and feels, and how players connect to the world of the NFL as it happens."

In a statement with NFL.com, Rachel Hoagland, the NFL's Vice President of gaming, esports, and partnerships, revealed the true scope of this new partnership and why the league chose to stick with EA:

It was important for us to really position the Madden franchise for future investment in innovation, gameplay features as we move to new consoles, more gaming devices, cloud-based gaming, and EA, really, given the history and knowledge and the level of talent gave us the best opportunity to do that.

EA is basically serving as the digital face of the NFL. The partners are calling it "the biggest and widest-reaching gaming agreement in NFL history." EA doesn't disclose revenue from individual titles, but this new agreement positions the Madden NFL franchise to keep its recent momentum going and significantly increase its player base through the next console cycle.