Please ensure Javascript is enabled for purposes of website accessibility
Log In Help Join The Motley Fool
Free Article Join Over 1 Million Premium Members And Get More In-Depth Stock Guidance and Research
By Nicholas Rossolillo – Updated Jun 12, 2020 at 8:51AM

A new decade is bringing new opportunities with it for companies developing innovative products and services.

The year 2020 has already been momentous, and it's not even half over. It's the start of a new decade, sure, but it will be remembered most notably as the year COVID-19 ended the longest period of economic expansion in U.S. history.

Periods of extreme uncertainty lay the groundwork for the next run higher, though, and innovative companies are even now hard at work pushing the boundaries of what's possible. Technological innovators aren't always great investments, so those who are thinking of buying stocks for the long term need to diversify accordingly.

I want to start with the most controversial stock here, Nikola, which just completed its public debut via a merger with special purpose acquisition company VectoIQ. The company is being talked about as a potential competitor with Tesla (TSLA 2.51%) in the burgeoning electric vehicle (EV) industry and has an equally vocal CEO and founder in Trevor Milton. Oh yeah, there's also the attention-grabbing fact that the stock doubled in a single day on June 8 (for what it's worth, I defend myself by saying I started writing this article before that happened).

What's all the fuss? Though this company has yet to make an official earnings report showing any sales, the company has over 14,000 pre-orders for its battery-electric and hydrogen fuel cell-electric big rig trucks (with some notable names among the pre-orders like Budweiser parent A-B InBev). The orders represent over $10 billion in sales, although that's if all of them are fulfilled. Nikola will be signing firm deals (starting later in 2020) on seven-year sale-lease agreements, so revenue will be recognized upfront but collected over the life of the term. Initial targeted routes will be on the I-10 corridor between Los Angeles and Phoenix (the latter being the location where the trucks will be assembled at Nikola's factory). Also of note (and what sent the stock soaring in a single day) is that pre-orders for its Badger pickup truck will open on June 29.

Milton and company are aiming to end reliance on diesel -- within the next decade if solely up to Nikola -- and will use the $700 million in cash it raised from its merger to complete its assembly facility outside of Phoenix, begin building its hydrogen fueling network, and continue signing partnerships with third-party manufacturers (which will include parts, as well as the Badger pick-up itself, although the automaker partner has yet to be announced). On this latter point, Nikola is unique. Where Tesla has vertically integrated its operations like no other auto manufacturer, Nikola is aiming to partner with as many companies as possible -- all the while controlling the highly profitable technology and licensing aspect of the business. 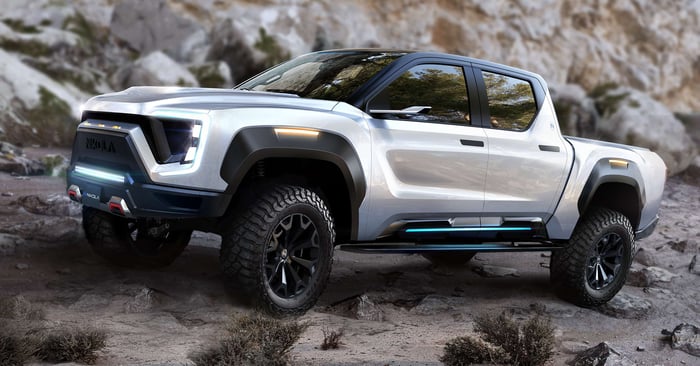 There are a lot of unknowns here, but the global transportation and logistics industry spends hundreds of billions, if not trillions, of dollars every year. While Nikola and Tesla will rub shoulders once in a while, there's more than enough market share ripe for disruption to go around. As of this writing, Nikola's market cap of $29 billion is on par with Ford's. Thus, I'm not advising an investor to jump in right now after the massive rush in recent weeks to scoop up the stock. However, I don't think the company is a pipe dream either. There is plenty of ultra-long-term (10 years or so, if Tesla is a guide) potential here. At the very least, keep Nikola on your radar, or buy a small position (1% or less of your portfolio) and forget about it.

Moving on to the far less controversial, NVIDIA is already a massive enterprise doing big business. Its graphics processing units (GPUs), and now high-speed networking gear via its recent takeover of Mellanox, are some of the key ingredients powering artificial intelligence and machine learning. In fact, its data center segment is set to pass up its core video game business, and the same tech fueling AI in the cloud has also been miniaturized to power robotics, autonomous machines, and other devices operating outside of data centers in the field.

In fact, while the video game industry is still a very large part of the whole at NVIDIA, this company has transformed itself into an AI and future computing powerhouse. The GPU is quickly becoming an accelerator for special-purpose computing needs and growing into an ubiquitous part of everyday life -- albeit behind the scenes and unknown to most. At its remotely held 2020 GPU Technology Conference, CEO Jensen Huang outlined all sorts of new innovative uses for his company's wares, from AI-powered call center services using conversational language to personally curated and predictive search results to the scaling of its autonomous vehicle tech to cover everything with wheels.

There's no denying that NVIDIA is an innovative chip designer, but it too comes with its own controversy. After rallying 150% in the last year following a cyclical sales slump in 2018 and early 2019, the stock trades for 19 times trailing one-year revenue and 51 times free cash flow (revenue less cash operating and capital expenses). That's some steep pricing, especially for an enterprise already carrying a market cap of over $220 billion.

But there's a good reason for the steep premium. Revenue is expected to grow by 39% in NVIDIA's next quarter, a rate that isn't necessarily out of the question for the rest of the year given Mellanox is now part of the picture (and lapping last year when it wasn't). Over the next decade, though, I think NVIDIA will be larger than it is today. So whether now is ideal timing to buy or not, I think this innovative semiconductor leader is worth a look.

Over the last 10 years, mobility and e-commerce were highly profitable investment themes. Now that mobile devices and online shopping are a part of everyday life, I believe services based on omnipresent mobility and delivered via the web on consumers' terms will be a key place to uncover winning stocks.

On this front, Square has already been a big success. After taking a breather since 2018, shares have more than doubled since the March 2020 market crash and are homing in on all-time highs again. Square's ecosystem of digital payments and online selling services for businesses is proving resilient in the shelter-in-place era, and a permanent bump up in activity could be the result as consumers and organizations adapt to a digital-first age. Its credit services for small businesses have been a lifeline during the COVID-19 crisis too. And Square's Cash App is also innovating new services for its users. Once a simple tool for individuals to send money to one another, the service is turning into a full-fledged mobile banking application.

The latest Cash App service added in the first quarter of 2020 was cross-border payments, giving users the ability to instantly move money between the U.S. and the U.K. It joins other add-ons like the Cash App debit card that links to a customer's digital wallet balance, direct deposit of paychecks and tax returns, and investing (including the ability to purchase partial shares for small retail investors). Between Square for businesses and the consumer-facing Cash App, Square is innovating a new type of banking relationship.

Of the three stocks listed, Square is the least expensive, with a valuation of 8.5 times trailing one-year revenue. On the profitability side of the equation, it trades for 90.4 times free cash flow (though it is still dumping most of its profits back into the business to develop new services and promote new Cash App capabilities). But the rich price tag goes with the innovative company territory. Square grew sales 44% in Q1 2020, and though no specific guidance was provided for the second quarter and beyond (as subscription service fees were temporarily paused to help customers), gross payment volume in the month of April was up 39%. The balance of 2020 will have plenty of turbulence, but it's clear this mobile banking and e-commerce company is making innovative waves and picking up plenty of new business.