Please ensure Javascript is enabled for purposes of website accessibility
Log In Help Join The Motley Fool
Free Article Join Over 1 Million Premium Members And Get More In-Depth Stock Guidance and Research
By Zhiyuan Sun – Jun 12, 2020 at 5:30AM

Can an early-stage cancer immunotherapy company deliver riches to shareholders?

Cancer is one of the most challenging conditions for investigational therapies to target because malignant cells are frequently able to disguise themselves as healthy cells, thereby surpassing detection from the body's immune system. One biotech company that's gaining ground in this field is Adaptimmune Therapeutics (ADAP -7.50%), which has a variety of pipeline candidates under investigation for targeting 10 types of solid tumors.

Even though it can be very risky to invest in small-cap cancer immunotherapy stocks, the company does have a few tricks up its sleeves to safeguard investors. Wall Street seems to agree, as institutional investors own 14% of the company. Without further ado, let's take a look at the potential perks and downfalls of investing in Adaptimmune. 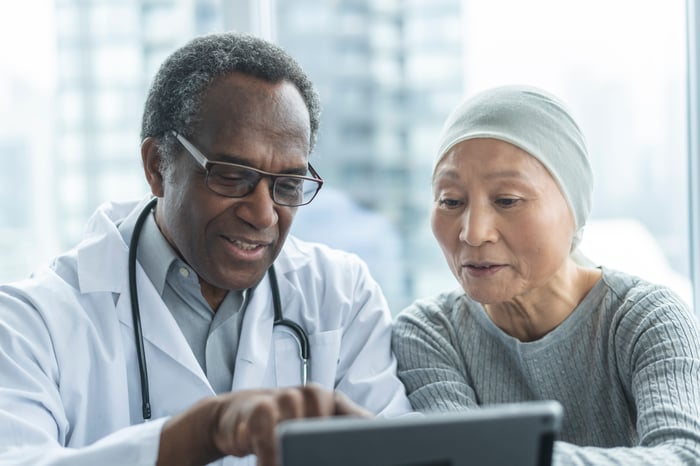 Immunotherapy is the science of activating or suppressing the body's own immune system to fight disease. Adaptimmune's uniquely engineered T-cell immunotherapies function by enhancing the ability of T-cell receptors to use an intermediate called human leukocyte antigen (HLA) to identify and destroy cancer cells.

What do these results mean?

Additionally, two out of four patients with head and neck cancer and two out of three patients with esophagogastric junction cancer treated with ADP-A2M4CD8 developed partial responses. Another patient (out of three total) with liver cancer developed complete response after treatment with ADP-A2AFP. Complete response is defined as complete eradication of the tumor after treatment with an experimental drug. There were no adverse events outside the expected range for any of these data releases.

Current first-line treatments for synovial sarcoma involve combination chemotherapy, which has very low response rates and can only marginally enhance patients' survival. In this regard, ADP-A2M4 does show significantly better response rates compared to historical studies. As for the rest of the indications, although their results may seem promising, the experimental therapies were conducted using minimal patient sizes consisting of just one to four people and have not been verified against placebo. Hence, no solid conclusions on whether or not the SPEAR T-cell therapies actually work can be drawn.

However, the company plans to initiate multiple phase 2 clinical trials with these therapeutic candidates as early as this year. In the next phase, one candidate, ADP-A2M4, is being tested with Merck's Keytruda (an approved checkpoint inhibitor) for the treatment of head and neck cancer. The use of ADP-A2M4 in a combinational therapy setting may produce synergistic results that will increase the likelihood of trial success.

Overall, the company is not at an exuberant valuation. A market cap of $1.2 billion isn't very high for a company with three cancer immunotherapy candidates. The company also expects to bring its first product to market by the end of 2022, which should assuage investors' long-term fears. Big players are interested in scooping up emerging cancer immunotherapy companies, as Gilead Sciences did with its $11.7 billion acquisition of Kite Pharma.

Hence, it's possible the company could be a potential takeover target. However, the stock is still very risky because past immunotherapies have advanced into later stages of clinical trials based on efficacy compared to historical studies, only to flop because the companies significantly underestimated the ability of standard of care drugs to keep patients alive.

Adaptimmune is not in an ideal financial situation. While the company has $196 million in available liquidity, it is running at an operating loss of approximately $20 million per quarter, and management expects its cash to run out by the second half of 2021. Indeed, the company just announced an offering on June 1 amounting to 12.5 million shares, resulting in total proceeds of $150 million at today's prices. Hence, investors should expect more dilution for the purposes of research and development.

However, shares closed up 19% on the day the dilution was announced, which is highly indicative of investors' confidence in the company's potential. With multiple immunotherapy candidates in its pipeline, the stock may be perfect for biotech investors with ample patience and high-risk tolerance to see the company's investigation come to fruition.