Please ensure Javascript is enabled for purposes of website accessibility
Log In Help Join The Motley Fool
Free Article Join Over 1 Million Premium Members And Get More In-Depth Stock Guidance and Research
By Daniel Miller – Jun 12, 2020 at 8:24AM

This could be the next huge winner in the automotive e-commerce area.

If you had asked investors last week whether Vroom (VRM 3.15%) would be able to replicate Carvana's (CVNA 8.22%) meteoric 775% stock price increase over the past three years in a similar time frame, most would have scoffed at the possibility. No doubt Vroom has much work to do if it wants to chase down Carvana's ridiculous revenue and stock price growth -- remember that Carvana posted 23 consecutive quarters of triple-digit revenue growth through the third quarter of 2019 -- but Vroom's off to a fantastic start as it soared as high as 115% during its Tuesday initial public offering. Is it really possible Vroom could race 775% higher over the next three years? 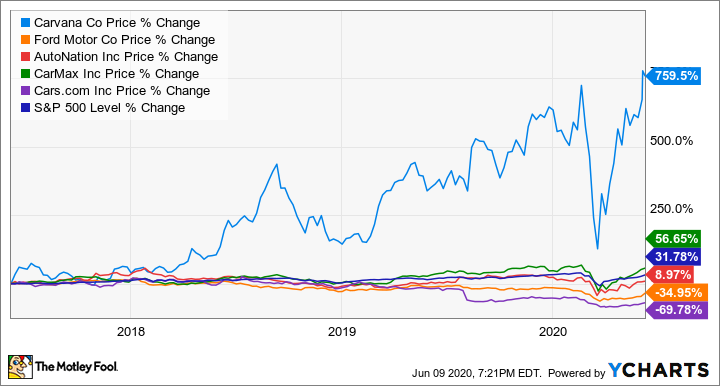 When it comes to finding investments positioned to thrive long term, it often comes down to a couple simple questions that need answering. First, does the company solve a legitimate problem? To that question, Vroom unquestionably can answer yes.

Vroom's online used-car buying platform offers a number of solutions for consumers, including reducing the time spent at traditional dealerships with what many consumers consider untrustworthy and high-pressure sales tactics. COVID-19 has accelerated what Vroom and Carvana have already proven about consumers' desire to complete more of a vehicle purchase online, away from the dealership, using market-based pricing, guaranteed purchase offers, real-time financing, and vehicle delivery options. Another problem Vroom solves is that an online selection of vehicles can dwarf the offering of traditional brick-and-mortar used-car dealerships. Vroom already offers online shoppers access to thousands of fully reconditioned vehicles, and that selection will only grow as the company increases its network and business footprint.

A commonly overlooked solution that Vroom provides is a sense of safety and simplicity if you're selling your vehicle. While peer-to-peer transactions make up roughly 50% of the used-car market, the ability to avoid a potentially sketchy situation with an unknown person, and often with a lack of secure payments, is valuable to many and is certainly a reason to consider Vroom when selling, trading, or buying used cars.

Another question facing potential Vroom investors is: What long-term catalysts are there to drive growth?

The above question has a tantalizing answer for potential investors. Many don't realize just how incredibly fractured the used-car industry is. In fact, its top 100 dealers account for only 8.6% of market share, leaving immense runway for asset-light business models such as Vroom's to expand market share using competitive advantages and e-commerce prowess. It would be incredibly expensive for a brick-and-mortar dealership to amass massive market share, but that's not an issue for e-commerce platforms.

Further, online growth is still in the early innings with e-commerce penetration estimated to be at 0.9% of the $841 billion used-car market, per 2019 sales. Here's the kicker: Industry reports estimate that e-commerce penetration in the used-car industry will reach as much as 50% by 2030, which would be a staggering boost for online used-car buying platforms. The used-car market is massive, ripe for e-commerce disruption, and can help solve historical consumer dissatisfaction and distrust of traditional dealerships.

Sure, it's easy for investors to buy into the tantalizing growth story of online car-selling platforms, especially as we remain in the COVID-19 pandemic, but the growth potential matters not if the company can't execute. That said, Vroom has seen a jump in many metrics, including a 130% increase in average monthly users during first quarter 2020 compared with the prior year, a 148% increase in e-commerce units sold, and a 72% jump in vehicles available for sale -- all over the same time period. Vroom's revenue grew 39% in 2019 compared with the prior year, and in Q1 2020 the company posted an accelerated 60% jump in revenue compared with the prior year's quarter, which suggests growth is still accelerating. 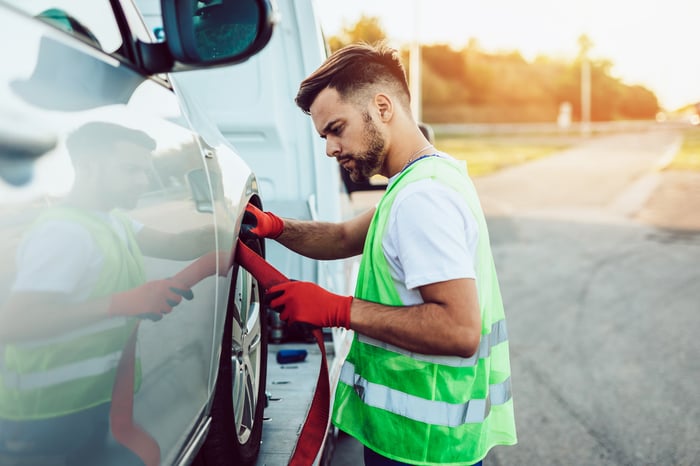 Is Vroom the next Carvana?

Vroom had an excellent debut on the markets with its stock doubling to over $44 per share, but investors have to temper expectations that this young company is the next Carvana. Keep in mind that Vroom's 7,930 e-commerce units sold during the first quarter pales in comparison to Carvana's 52,427 retail units sold during the same period. Also, Vroom's inventory of 5,107 vehicles available for sale is also a far cry from Carvana's selection of over 33,500 vehicles.

If Vroom is going to replicate Carvana's stunning 775% stock price rise over the next three years, it will have to execute a number of difficult things. Vroom will have to convince investors in one way or another that it has built a better mousetrap, whether through service, website functionality, or other ways, to lure customers away from Carvana as well as traditional dealerships. Carvana has separated itself in a unique way with its car vending machines, which help spread brand awareness on social media and give the company a foothold in many large cities. Management will also have to prove that growth can continue to accelerate for years, as Carvana has already proven with its streak of over 23 consecutive quarters with triple-digit revenue increases. Investors also have to consider the fact that, even with all of Carvana's accomplishments, the company has yet to turn a profit and continues to burn through cash.

Vroom could very well be a strong competitor to Carvana, and there is plenty of room for both in the highly fractured used-car market. While Vroom has a lot to prove before investors will reward it with enough demand to boost its stock 775% over the next three years, its 102% gain Tuesday emphasizes it has enough of a growth story to have a chance.