Please ensure Javascript is enabled for purposes of website accessibility
Log In Help Join The Motley Fool
Free Article Join Over 1 Million Premium Members And Get More In-Depth Stock Guidance and Research
By John Ballard – Jun 13, 2020 at 11:09AM

This apparel store has plenty of cash to survive COVID-19 and could be a promising value play.

Abercrombie & Fitch (ANF 0.78%) has long been considered a staple brand in the apparel industry. In addition to the namesake stores, the company also operates the Hollister chain, which caters to the teen shopper and comprises most of the company's sales and store count.

Abercrombie & Fitch has been around for more than 100 years, and around 15 to 20 years ago, it was one of the hottest stores at the local shopping mall. However, the company has lost that former glory, gradually shrinking its store base in recent years while supporting the growing digital business. While there's not much growth here, Abercrombie does have some characteristics that could make it a good value play. 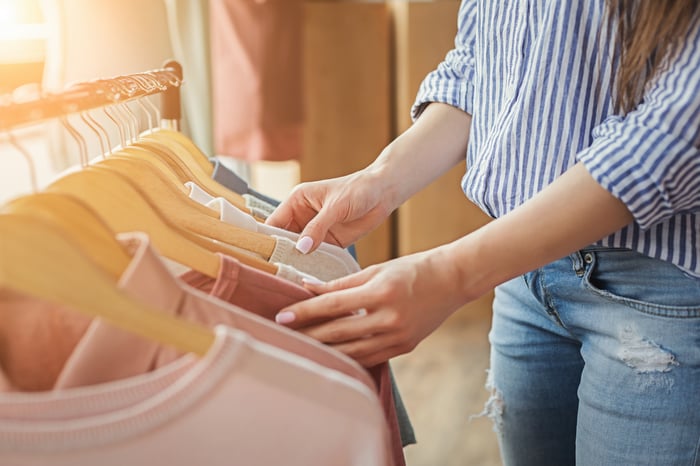 Before the Great Recession in 2008, the company's market value was around $6 billion. In fiscal 2007, Abercrombie generated $3.7 billion in revenue and $475 million of net income. But a poor economy has a way of accelerating certain trends while forcing legacy brands to shift gears. As more and more people migrated to e-commerce, many retailers found themselves with too many physical stores. Abercrombie & Fitch was one such company.

It has been gradually shrinking its square footage and closing stores as its digital sales continue to grow, which currently comprise about one-third of total revenue.

The recent store closures from COVID-19 caused sales and profits to plummet in the fiscal first quarter as only 48% of the company's stores were open globally as of May 28.

The results from fiscal 2019, pre-COVID, give us a better picture of Abercrombie & Fitch as a business. Sales have not grown at all over the last decade, given the shrinking footprint, but comparable sales were positive for the third consecutive year -- 3% in fiscal 2017, 3% in fiscal 2018, and 1% in fiscal 2019. Total sales last year hit $3.6 billion on top of $48 million of adjusted (non-GAAP) net income.

Abercrombie is here to stay. It ended the most recent quarter with $704 million in cash and just $442 million in borrowings.

Abercrombie & Fitch temporarily suspended its dividend and share repurchases due to the recent store closures. But management will likely reinstate the dividend once stores are fully reopened and business conditions are stable.

The dividend hasn't increased since fiscal 2013, but at its previous annual payout of $0.80 per share, the stock would currently yield 7.2%. Before the COVID crisis, Abercrombie typically paid out around half of its annual free cash flow in dividends.

During the fiscal first-quarter earnings call, CEO Fran Horowitz said the company was "leaving no stone unturned" on the expense line. Given the difficult retail environment in recent years with legacy apparel stores, Abercrombie has gotten quite good at scrutinizing its cost structure.

In light of the pandemic, management cut $200 million of costs, some of which was savings from furloughing employees, unfortunately. But management plans to make a portion of the cost savings permanent.

The recent cost savings are consistent with management's previous goal to double non-GAAP operating margin from 2.9% in fiscal 2017 to 5.0% to 5.8% by fiscal 2020. COVID-19 has delayed this goal, but investors can count on management to remain focused on improving profitability beyond the near term.

The stock currently trades at 15 times fiscal 2019 adjusted earnings. Another way to evaluate the stock's appeal is to compare the price to free cash flow. On that basis, the shares trade at 10 times trailing free cash flow.

Abercrombie is a promising value stock

Abercrombie & Fitch is unlikely to deliver much growth on the top line, especially as management continues to reduce store square footage as more demand shifts to its digital channel.

But it's clear Abercrombie & Fitch is not going anywhere. In fact, the brand might be in position to gain market share as other retailers exit the market allowing its established name to fill the gap. Even with stores closed during the outbreak, management reported that some categories at Abercrombie, such as jeans, knits, and skirts, performed well. The brand has been successful with its digital marketing campaigns, targeting customers through social media.

We're not discussing a growth stock here. This is a retail stock for value aficionados. With value stocks, it's ideal to find a company with a strong balance sheet that has a consistent record of turning a profit. Excluding the abnormal circumstances of COVID-19, Abercrombie & Fitch offers that combination.

The stock has been beaten down in recent years, but if Abercrombie & Fitch can get back to positive comparable-sales growth once the economy recovers, there could be upside with this retail stock from these current lows.