Boeing (BA -3.39%) has taken shareholders on a wild ride over the past few months. Boeing stock crashed from nearly $300 in early March to a low of $89 on March 18 before rebounding to over $180 barely a week later. Shares of the aerospace giant then settled in a trading range of roughly $120 to $150 for the next two months before ripping higher in June.

Boeing stock finished the month of May at $145.85 but surged to $230.50 by the end of trading last Monday: good for a 58% gain in just six trading days. But the stock pulled back violently over the following three days, plunging 26% -- including a 16% drop on Thursday. 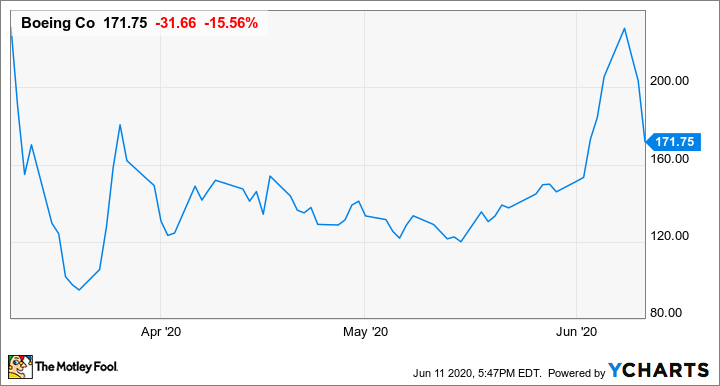 Some investors may see this week's pullback as a new opportunity to buy Boeing stock while it's on sale. That looks like a mistake, though. Boeing's business could remain weak for the foreseeable future compared to the record results it posted just two years ago.

A big reason for Boeing stock's surge earlier this month was growing optimism about a rebound in air travel demand. Indeed, while air travel is still a long way from returning to pre-pandemic levels, there have been solid signs of sequential improvement.

In the U.S. specifically, the TSA reported that 386,969 people passed through its checkpoints last Wednesday -- that's 15.4% of the number screened on the same day last year. One week earlier, TSA screenings were just 12.8% of year-ago-levels; in mid-May, that figure was 7.5%. Even if the rate of sequential improvement moderates over time, the recent trend offers hope that air travel could be approaching 2019 levels within a year or two.

Of course, a "second wave" of the COVID-19 pandemic (potentially combined with setbacks in the vaccine development process) could lead to a reversal in the recent recovery. However, even if air travel demand returns to near 2019 levels over the next couple of years, that doesn't mean Boeing's business will go back to normal. That's because growth -- rather than replacement demand -- typically drives the vast majority of aircraft purchases.

Between 2015 and 2018, nearly 70% of commercial jet deliveries went to support airlines' growth, with the rest used to replace older jets. If airlines buy only enough jets to replace those they retire over the next few years (which would be consistent with returning to 2019 traffic levels by 2022 or 2023), it would imply demand 60% to 70% below recent levels. 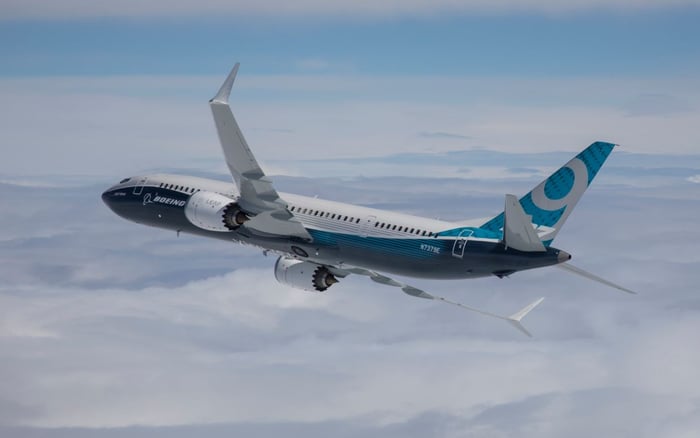 It could take years for commercial jet demand to fully recover from the COVID-19 pandemic. Image source: Boeing.

Even when global air travel does surpass the 2019 peak again, growth could be slower than was the case in recent years. For most of the past decade -- but particularly between 2015 and 2018 -- air travel grew faster than its long-term average growth rate. Fewer new aircraft would be needed each year if growth moderates.

The 737 MAX will remain a weakness

Despite the headwinds noted above, global new aircraft demand will likely recover to around pre-pandemic levels within three to five years. But that won't put an end to Boeing's problems. Narrow-body jets will likely account for an even more dominant share of the commercial jet market in the years ahead. Boeing's entry in that segment -- the 737 MAX -- has been grounded since last March, following two fatal crashes.

On the bright side, the 737 MAX does seem likely to be recertified within the next few months. (That's another reason why Boeing stock rallied off its mid-March lows.) Boeing also continues to have a robust backlog of 3,776 firm orders for the 737 family: mainly for the 737 MAX.

That said, Boeing owes billions of dollars of compensation to airlines to cover costs of the grounding, aircraft modifications, and additional training that will be necessary. It is also likely to incur substantial costs to settle lawsuits from victims' families and government investigations into its safety practices. Finally, the 737 MAX backlog pales in comparison to the nearly 6,200 firm orders Airbus has for its competing A320 family.

In short, Boeing is likely to be dealing with costs from the 737 MAX crashes and subsequent grounding for many years to come. Meanwhile, Airbus' much larger backlog may enable it to make significant market share gains at Boeing's expense. This will hurt Boeing's cash flow.

The balance sheet is in tatters

Finally, the 737 MAX grounding and the pandemic have combined to destroy Boeing's balance sheet. Boeing burned $4.3 billion of cash in 2019 while also spending $7.3 billion on dividends and share buybacks. It burned through another $4.7 billion in the first quarter of 2020 alone.

Boeing will need to keep its dividend and buybacks suspended in the near term, so that it can devote all of its free cash flow to debt reduction. But with cash flow likely to be quite weak, this process could take four or five years. The resulting inability to return capital to shareholders will remove a big reason why Boeing stock was so popular with investors in recent years.

Global air travel should bounce back from the unprecedented setback it has experienced in 2020 within a few years. However, Boeing's cash flow is unlikely to recover to 2018 levels at any point in the next decade. As a result, Boeing stock would have to fall a lot further to be attractive as a long-term investment. There are far better opportunities elsewhere in the market right now.