Please ensure Javascript is enabled for purposes of website accessibility
Log In Help Join The Motley Fool
Free Article Join Over 1 Million Premium Members And Get More In-Depth Stock Guidance and Research
By Alex Carchidi – Jun 14, 2020 at 6:00AM

Each company aims to use its genome editing platform to treat disease, but which has an edge?

CRISPR Therapeutics (CRSP 5.20%) and Sangamo Therapeutics (SGMO 3.99%) are clinical-stage biotech companies aiming to capture a slice of the cell and gene therapy market, which will grow to be $12 billion in size by 2025. As gene therapy companies, both have developed technology platforms that make it possible to alter the genome and therefore change the behavior of a patient's cells.

At a glance, the two companies may appear similar. But for biotech investors, it's worth investigating the differences between the two companies and seeing what might catalyze the growth of these stocks. Any investor would benefit from learning about these biotech companies and the exciting world of gene editing. After all, buying CRISPR or Sangamo could add growth potential to their portfolios. 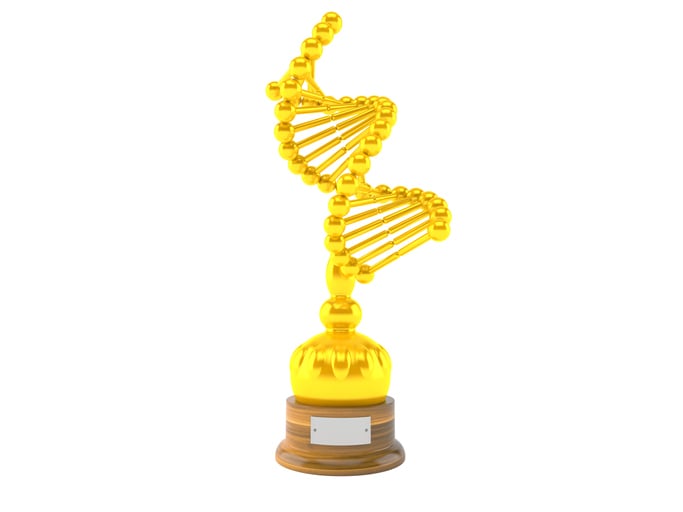 As a relatively new clinical-stage gene therapy company, CRISPR Therapeutics has no recurring sources of revenue. But the company's muscular dystrophy drug discovery collaboration with Vertex Pharmaceuticals (VRTX 2.69%) yielded it $25 million at the start of 2020, and future milestone payments could account for as much as $800 million over the next few years. With revenues from this collaboration and others, CRISPR Therapeutics' trailing 12-month operating margin is 7.46%, which is unusually high for a biotech company that doesn't have a commercialized product.

In particular, the company's CTX130 chimeric antigen receptor T-cell (CAR-T) project is targeted at solid tumors and hematological malignancies, meaning that it could be a blockbuster drug with a handful of different indications. Similarly, CRISPR Therapeutics' CTX110 project is targeted at a smattering of different B-cell malignancies, like lymphoma, acute lymphoblastic leukemia (ALL), chronic lymphocytic leukemia (CLL), and Non-Hodgkin's Lymphoma (NHL), guaranteeing it a large market if approved.

As with CRISPR Therapeutics, Sangamo's recurring revenues are nonexistent as a result of having no products on the market. The company earned $350 million from a recent collaboration with Biogen, and its ongoing collaboration with Pfizer may have a similar yield by 2022. Nevertheless, with trailing 12-month revenues of $107.43 million and a trailing 12-month operating negative cash flow of $118.17 million, the company's $358.13 million in cash will be more than enough to sustain its pipeline development at the present intensity for the foreseeable future.

Unlike CRISPR Therapeutics, Sangamo's technology platform uses an older gene editing technology called zinc-finger nucleases (ZFN). ZFNs are considered to be more technically cumbersome than CRISPR-based editing, but in some cases, ZFNs can accomplish similar gene editing results. While Sangamo has invested significant effort in getting its ZFN editing platform to work to produce its pipeline candidates, at present there are no gene therapies on the market which utilize ZFNs.

Sangamo has a relatively small pipeline for a company of its age, which should give potential investors pause. With only one phase 3 program and only two wholly owned phase 1 programs, Sangamo does not appear to have a plethora of prospects in the coming years. By targeting genetic disorders like Fabry disease, beta thalassemia, hemophilia, and sickle cell disease, each of Sangamo's clinical-stage projects has an inherently small potential market. For context, the world market for thalassemia therapeutics was valued at only $1.72 billion in 2016, whereas the market for sickle cell therapeutics was valued at only $2.1 billion in 2017. In the thalassemia market, Sangamo would also face fierce competition from companies like bluebird bio, potentially leaving it with an even smaller slice of an already-small pie.

Still, Sangamo's phase 1 program SB-913 is especially compelling. SB-913 is a genome editing project intended to treat or cure Hunter syndrome, a rare and frequently fatal genetic disorder. While Hunter syndrome only affects around one in 25,000 people at birth, Sangamo's program could potentially permanently correct the genetic basis of the disease by directly editing the genomes of patients.

In early 2019, Sangamo announced that it had tested SB-913 in two patients with Hunter syndrome in a phase 1 trial. The results were promising, but insufficient to remediate the disorder. This means that Sangamo likely has more preclinical optimization to perform on SB-913 before it has a reasonable chance of passing through phase 2 and phase 3 clinical trials. Which company is worth an investment?

CRISPR Therapeutics is the better buy, in part due to its significantly faster growth compared to Sangamo. With its focus on broadly applicable and efficient-to-manufacture immuno-oncology therapies and its remarkable profitability for a biotech company without any products on the market, it's clear that the company's momentum is only starting to grow. While CRISPR Therapeutics' programs may not hit the market for another few years, look for stock-boosting updates from its clinical-stage immuno-oncology projects as soon as next quarter.

In contrast, Sangamo's strategy is to target rare genetic diseases with gene therapy candidates produced by its technology platform. While the company's approach has seen some early validation in clinical trials, its pipeline projects have inherently lower maximum payoffs, simply because they target small and crowded markets. The company's most promising programs likely require another year or two of preclinical development before making another attempt at phase 1 clinical trials, so look at the company's annual statements to get an idea about how things are proceeding.

Overall, both of these companies are high-risk options for investors. Thus, the safest plan is to invest in a carefully hedged portfolio of gene editing stocks to ensure that the risks of any one company failing to grow are minimized and to guarantee exposure to the upside of any gene editing company that makes it to the market with an innovative therapy.