Please ensure Javascript is enabled for purposes of website accessibility
Log In Help Join The Motley Fool
Free Article Join Over 1 Million Premium Members And Get More In-Depth Stock Guidance and Research
By Rich Smith – Jun 15, 2020 at 8:07AM

And this one can carry laser guns!

If you've been investing in the stock market for any length of time, you probably know the names of the bigger defense stocks by heart -- the Boeings, Lockheeds, and General Dynamics-es of the world. You probably even know a few of the second-tier defense contractors, smaller defense-focused stocks like Kratos Defense, as well as mid-size industrials with significant defense businesses like Oshkosh or Textron.

But did you know that within this second tier, Polaris Industries (PII -1.67%) is a defense contractor, too?

It's true! Although better known for its snowmobiles and civilian ATVs, Polaris has actually been building vehicles for the Pentagon since the Reagan Administration. And Polaris's defense business just won a new contract that will secure it a place at the Pentagon for the better part of the next decade. 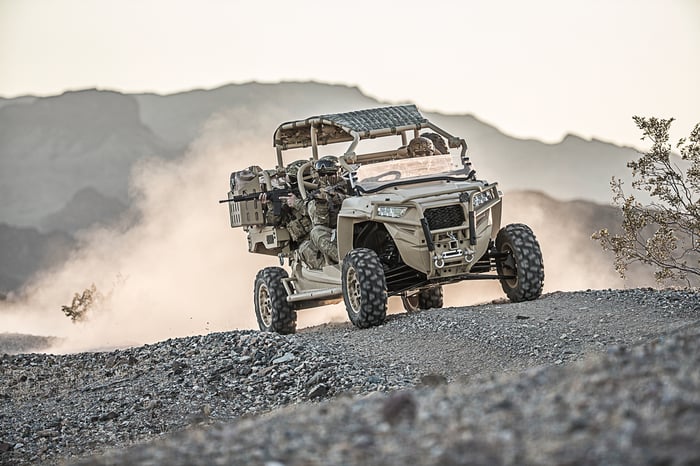 Polaris's civilian model snowmobiles and all-terrain vehicles combine to account for 62% of annual sales, according to data from S&P Global Market Intelligence, while its Indian motorcycle brand accounts for another 9% of sales. Defense products, by comparison, account for just a sliver of the business, and are lumped into a "global adjacent markets" division that also produces light-duty trucks, urban commuting vehicles -- and quadricycles!

Polaris hasn't historically won a lot of large military contracts, but its military operations began picking up speed in 2015, when the Pentagon awarded the company an $83 million five-year contract to build MRZR 2 and MRZR 4 lightweight tactical all-terrain vehicles (pictured above) for U.S. Special Operations Command, or SOCOM. Now, five years later, SOCOM is ready to re-up that contract for another seven years, and this time SOCOM will have Polaris supply as much as $109 million worth of new light tactical vehicles dubbed "Polaris MRZR Alpha."

As Polaris describes in its press release, MRZR Alpha will be the 11th military vehicle type that Polaris has produced in the last 12 years. Like previous models, MRZR can be outfitted with communication equipment, intelligence, surveillance and reconnaissance (ISR) systems, expeditionary command and control systems, and autonomy packages (i.e. it may be capable of self-driving). It can be tweaked to carry litters for medical and casualty evacuation. And MRZR Alpha can also be fitted out with both defensive "counter unmanned aerial systems" for shooting down drones, and also offensive weaponry, including high-energy lasers -- taking the latest in 21st-century weaponry entirely off-road.

To date, Polaris has been mainly a bit player in military contracting. That being said, its position in the small defense niche that it's claimed as its own appears secure. The company's 2015 MAZR contact win, for example, was awarded as a "sole-source" contract -- Polaris was apparently the only company the Pentagon deemed capable of fulfilling its requirements. This new 2020 contract, meanwhile, was competitively bid (meaning Polaris had competitors to beat this time around), yet Polaris came out on top once again, and won more money to boot.

Now, is the MAZR Alpha contract big enough to "move the needle" on Polaris stock? Perhaps not. Even at a larger size, Polaris's Pentagon business remains small enough to get lost within the company's overall $6.8 billion, mostly civilian revenue stream.

That being said, every little bit of extra revenue will help Polaris achieve the 15% annualized growth rate that analysts have set for this stock. At a valuation of just 15 times free cash flow, Polaris seems a reasonably priced stock -- and one with at least slightly better growth prospects than it had before winning this latest Pentagon award.