Markets bounced back from significant losses.

The stock market got off to a rocky start on Monday, but by the end of the session, investors felt a lot better about the situation. Even though there were signs that the coronavirus pandemic might hit the U.S. hard again in the near future, market participants seemed not to let that prospect bother them too much. Support from the Federal Reserve in the form of more asset purchases helped to lighten the mood as well. The Dow Jones Industrial Average (^DJI -1.62%), S&P 500 (^GSPC -1.72%), and Nasdaq Composite (^IXIC -1.80%) finished higher by as much as 1.5%.

One area that's finally starting to look at reopening is the sports industry, and newly public DraftKings (DKNG -3.85%) stands to gain from the return of online betting as major leagues in various sports get up and running again. Meanwhile, Tesla (TSLA -4.59%) once again moved higher as the company contemplates making good on its threat to shift some of its facilities out of California toward the friendlier Texas market.

Is DraftKings a good bet?

Shares of DraftKings climbed 13% on Monday, lifted by favorable news in a key market. Online gambling activity is on the uptick, and there are even better prospects ahead as sports return to action. 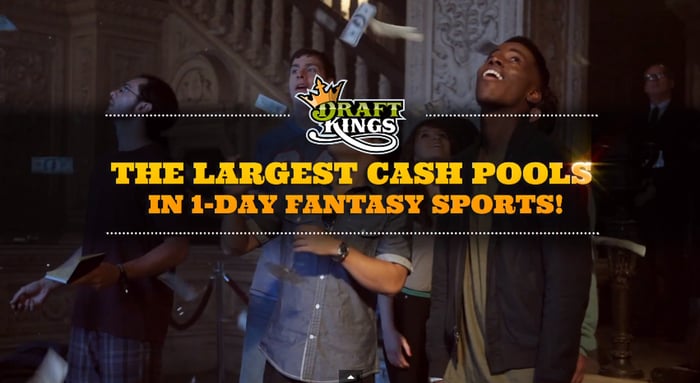 Over the weekend, PGA golf returned to the schedule for the first time in months, joining the NASCAR races that have been going on for several weeks. The NBA has put a plan in place to finish its season, and European soccer leagues either have already restarted or are scheduled to do so in the near future. Major league baseball in the U.S. remains uncertain, but players and owners are negotiating toward some resolution for the 2020 season.

Online gambling activity in New Jersey, which is one of the most important markets in the U.S., also saw encouraging growth, more than doubling in May 2020 compared to May 2019. Stock analysts believe that state governments that have gotten hit hard by the loss of revenue because of coronavirus shutdowns are more likely to adopt online gambling, and that should give DraftKings a chance to expand.

DraftKings stock has done well, and some see more upside ahead. As more sports return, all eyes will be on the fantasy sports and gambling platform to see if it can make good on its promise as a newly public company.

Shares of Tesla were higher by 6%. The electric-auto maker is seeing good news in China, but a lot of people are watching the action in its domestic market.

China's timeline with the coronavirus pandemic was ahead of the rest of the world's, and to a large extent, business is back to normal in the world's second largest economy. Tesla saw the number of vehicle registrations within China jump by 150% in May compared to April's numbers, showing the pace of recovery for the company. The reports also indicated that Shanghai-based production of Model 3 vehicles is ramping up well, with more than 11,000 cars sold.

Yet what's grabbing attention late on Monday are reports that Tesla is negotiating with public officials in Texas to open a new assembly plant in the Austin area. The news comes after contentious wrangling with local governments about Tesla's California plant in Fremont, where health officials sought to have the automaker comply with restrictions on nonessential business operation. CEO Elon Musk was incensed by the fight, commenting that he would seek to move production elsewhere because of the hassle involved.

Investors believe that Tesla has the ability not just to dominate other auto stocks but to become a leader in adjacent technologies as well. Whether or not it makes the journey from California to Texas, Tesla is doing what it can to demonstrate its leverage with state and local governments.