The combination of Flutter Entertainment and The Stars Group will be a global gambling powerhouse.

Competition in the online gambling industry is heating up. In 2018, the U.S. Supreme Court cleared the way to allow legal sports gambling, and many states have already changed their local laws to allow it to take place within their borders. While online gambling is a lot bigger than just sports betting, those legislative changes have helped catalyze growth for the entire industry.

Established gaming companies have taken note and have been making investments to capitalize on that growth. One of the most notable investments made has been Flutter Entertainment's (PDYP.Y 0.01%) (FLTR -0.19%) merger with The Stars Group in a deal valued at over $12 billion.

What is Flutter Entertainment?

Prior to the Stars Group merger (completed on May 5), Flutter Entertainment was an Ireland-based company with gambling brands around the world, but with an emphasis in the U.K. and Ireland.

The company's key gambling brands include Paddy Power, Betfair, Sportsbet, Adjarabet, TVG, and FanDuel. Paddy Power consists of over 600 retail betting shops across the U.K. and Ireland where adults can legally place sports bets. Flutter also has popular online gambling websites that utilize its Paddy Power and Betfair brands. The company's Sportsbet brand is the market leader in Australian online sports betting. Adjarabet is the leading gambling company in the Eastern European country of Georgia. TVG is an American brand focused on broadcasting and facilitating bets on horse racing.

In 2018, Flutter bought FanDuel, a massive daily fantasy sports betting platform serving over 8 million customers in the U.S. In daily fantasy sports, players compete against each other by building hypothetical teams of professional athletes and earning points based on how well their selected group performs. FanDuel and its rival DraftKings -- which recently went public -- have added gambling to the equation to create a popular and rapidly growing way to bet on sports.

In essence, Flutter Entertainment is a global gambling company that has had a European focus. However, the company wants to expand and diversify geographically, and it saw acquiring The Stars Group as a perfect way to do so.

What did Flutter get by buying The Stars Group? 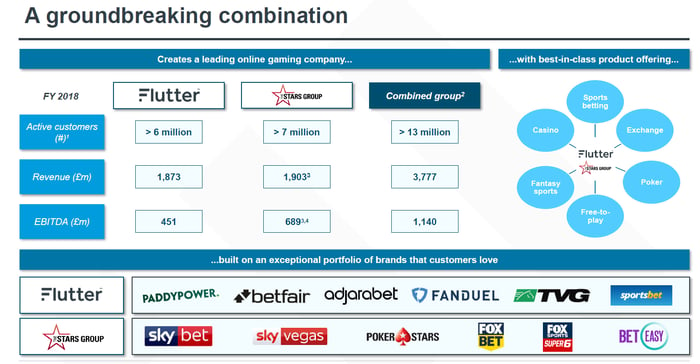 On the investor call announcing the acquisition, Flutter's CEO Peter Jackson made the following comments:

"Primarily, this deal is about delivering growth. During our prelims result presentation, I highlighted how the global gaming industry is worth approximately $450 billion and is growing at [a] pace that still has a long runway of growth ahead of it."

In other words, Flutter wants as many shots on goal as possible as it attempts to maximize its market share in online gambling. Although Flutter already had strong positions in some niches such as U.S. sports gambling, it lacked top brands in categories like online poker. Having multiple online gaming brands in different categories also enables the company to cross-sell players onto other platforms. For example, Flutter can advertise FanDuel on Poker Stars to grow its user base.

The acquisition also presented it with the opportunity to increase margins by taking advantage of economies of scale and synergies. Flutter is targeting total deal synergies of 140 million pounds (about $176 million) by 2022. These savings will come from the elimination of redundancies at the corporate level and the consolidation of tech platforms, among other things.

Finally, The Stars Group already had a partnership with Eldorado Resorts' casinos in 13 states to provide online gaming licenses. Flutter likely could've struck a similar deal on its own, but this acquisition allows it to meet that licensing requirement.

Creating a gambling platform for the future

The combination of Flutter Entertainment and The Stars Group was structured as an all-stock deal and it was completed in May. The result is the largest online gambling company in the world by revenue and a platform in a prime position to take advantage of the significant industry growth that lies ahead.