Please ensure Javascript is enabled for purposes of website accessibility
Log In Help Join The Motley Fool
Free Article Join Over 1 Million Premium Members And Get More In-Depth Stock Guidance and Research
By Jeremy Bowman – Jun 16, 2020 at 8:31AM

Just weeks after teaming up with Facebook to launch Facebook Shops, Shopify (SHOP 0.67%) has nabbed another titan of industry in its quest to take on Amazon (AMZN -3.01%) in e-commerce. The cloud-based e-commerce software maker is partnering with Walmart (WMT -2.50%) to help the world's largest retailer beef up its e-commerce marketplace.

In an announcement, Walmart said that it would be adding 1,200 small-and-medium-sized Shopfiy sellers to its marketplace this year in order to expand selection and variety. The retail giant also said it is interested in Shopify businesses that "have a track record of exceeding customers' expectations." Walmart isn't the only beneficiary of this partnership, of course. Shopify sellers will gain access to Walmart's massive customer base and surging online traffic, as the retailer touts 120 million monthly online visitors.

Shopify shares jumped on the news, rising more than 8% Monday, as investors saw it as the latest evidence of the company's disruptive potential. It launched its own consumer-facing app, Shop, just weeks ago, and that's in addition to the Facebook partnership. Both Walmart and Shopify see Amazon as a common enemy. Will the move help dethrone Amazon as the e-commerce king? 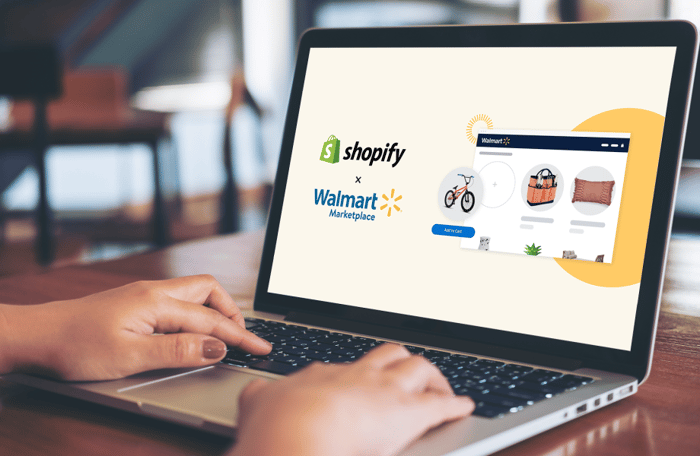 This is far from the first time Walmart has sought a teammate in its fight against Amazon. The company partnered with Alphabet on several occasions, including its failed Google Express e-commerce business, to take on Amazon, and in 2016 it acquired Jet.com, a start-up led by Marc Lore which was at that point seen by many as Amazon's biggest potential threat in e-commerce, for $3.3 billion. Walmart recently said that it would close down Jet.com and fold its resources and employees into Walmart.com, which generates more traffic and has a greater return on investment.

Still, the retailer got what it wanted out of Jet and Lore, who now runs Walmart's e-commerce division. It's become the #2 online retailer in the U.S., with a big assist from its online grocery program, and has vastly expanded its capabilities, accelerating shipping speeds, expanding inventory, and acquiring a number of smaller digitally native businesses.

Though Walmart does a number of things well in e-commerce, including online grocery and free one-day shipping, its third-party marketplace has traditionally lagged. Amazon, which built its third-party marketplace on top of its direct e-commerce business, now generates more gross merchandise volume from its marketplace than its direct-selling business. E-commerce marketplaces are generally much more profitable than direct selling, as marketplace owners leverage their infrastructure and network of buyers and sellers to collect fees for sales, processing, and add-on services.

Not surprisingly, Walmart only has a small fraction of the marketplace sellers that Amazon does. Neither company has publicly revealed the number of marketplace sellers it has, but according to estimates, Walmart had more than 33,000 as of January this year, while Amazon has millions.

Consdiering that, the Shopify deal will help Walmart increase its stable of sellers, but it won't do much to narrow the gap with Amazon.

Can they catch up to Amazon?

It's long been clear that the biggest threat to Amazon, aside from possibly a regulatory breakup, is a consortium of companies teaming up to take it on. Walmart has previously tried this to little avail, and now Shopify seems to be adopting a similar approach.

Though only 1,200 Shopify sellers are expected to join Walmart's ranks, the program has a lot of potential. Shopify has more than 1 million merchants on its platform, and an expansion is likely if the partnership with Walmart is successful.

As it's now the second-biggest e-commerce business after Amazon, Walmart holds particular appeal for online sellers -- not just because it's the next best place to get an audience after Amazon, but because building up Walmart's marketplace can help keep Amazon in check, balancing out its power.

Ultimately, e-commerce is not a winner-take-all market, and all three companies can find success and growth in the industry. The impact of the COVID-19 pandemic has created tailwinds that have benefited virtually all e-commerce operators, and Amazon, Walmart, and Shopify have all reported significant momentum from the crisis.

With Prime, its third-party marketplace, and other assets, Amazon is so entrenched as the e-commerce leader that it will be very difficult to dethrone. But with U.S.commerce sales growing by about $100 billion every year in the U.S., Walmart and Shopify have a significant opportunity ahead, and the new partnership is a smart way to take advantage of it.