Please ensure Javascript is enabled for purposes of website accessibility
Log In Help Join The Motley Fool
Free Article Join Over 1 Million Premium Members And Get More In-Depth Stock Guidance and Research
By Howard Smith – Updated Jun 16, 2020 at 11:11AM

The owner of retail outlet shopping centers is seeing traffic approaching last year's level where in-store retail has been open for 30 days or more.

In a sign that consumers are coming back, Tanger Factory Outlet Centers (SKT 7.28%) said in a business update that 90% of its occupied stores are now open where in-store retail has been allowed for 30 days or more, and it is seeing weekly traffic at levels above 90% compared to a year ago. Today, the Department of Commerce also announced a 17.7% jump in retail sales in May -- another signal of recovery in retail.

Tanger is a real estate investment trust (REIT) that owns and operates 39 upscale retail outlet shopping centers in 20 states and Canada. Almost 60% of its square footage is in areas deemed by the company as tourism destinations. 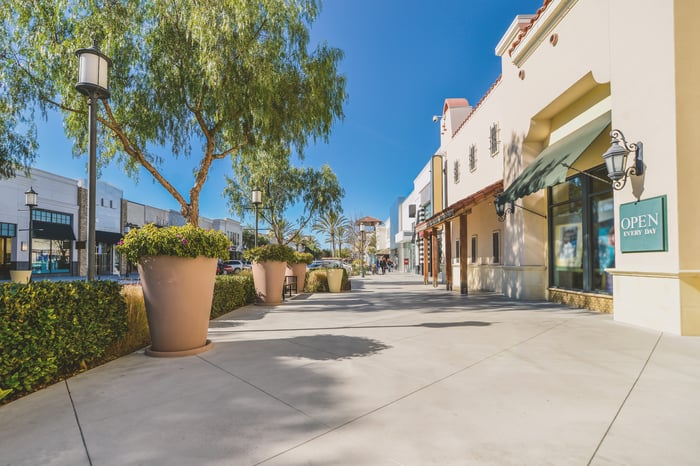 Tanger has been impacted by the COVID-19 pandemic as state and local governments have shut down non-essential businesses. It said in its first-quarter earnings report that it was suspending its dividend distributions to conserve cash, but that it intends to remain in compliance with REIT income distribution requirements. Tanger is unburdened by mortgages on 94% of its square footage.

In the company's most recent business update, CEO Steven Tanger said, "we are encouraged to see retailers reopen their stores and pleased that traffic is returning to our centers." The company has been working to improve liquidity, and said it has repaid $100 million of outstanding balances on its lines of credit and currently has approximately $433 million of cash on hand, as well as $100 million of unused lines of credit.