Please ensure Javascript is enabled for purposes of website accessibility
Log In Help Join The Motley Fool
Free Article Join Over 1 Million Premium Members And Get More In-Depth Stock Guidance and Research
By Prosper Junior Bakiny – Jun 17, 2020 at 10:29AM

Both companies have been at the forefront of the hunt for a novel coronavirus vaccine, and both have seen their shares soar as a result. Which one will be the biggest winner in the long run?

With more than a dozen companies now involved, the race to develop a vaccine for COVID-19 is crowded. Several of those companies stand out from the pack, though, including Novavax (NVAX -1.99%) and Moderna (MRNA 0.15%). These two biotechs have been moving rapidly through the early stages of the development of their respective vaccine candidates, and with investors looking to pick out the eventual winner, both have provided market-shattering returns of late.

However, Moderna's excellent performance year-to-date -- its stock is up by 217% since the beginning of the year -- looks positively tame compared with Novavax, which has seen a more than 1,000% gain since the year started. Looking forward, which of these two companies is more likely to outpace the other? 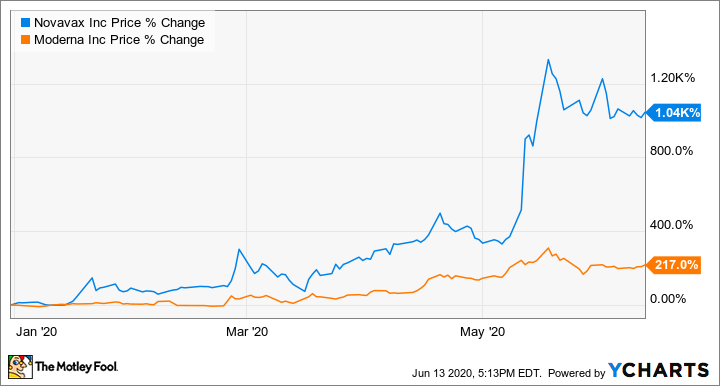 Moderna is currently running a phase 2 clinical trial for its vaccine candidate, mRNA-1273. The trial will enroll 600 healthy participants, each of whom will receive two doses of the vaccine 28 days apart. The trial will test the vaccine's safety, immunogenicity (the ability to trigger an immune response in the body), and reactogenicity (the amount that causes any expected side effects).

Moderna also announced that it has finalized the protocol for a phase 3 clinical trial for mRNA-1273, which should start next month. The company will conduct this trial in collaboration with the National Institutes of Health (NIH). The primary endpoint for the phase 3 study will be "the prevention of symptomatic COVID-19 disease." Secondary endpoints will include the prevention of severe cases of COVID-19 and the prevention of infection by the SARS-CoV-2 virus that causes COVID-19.

Moderna will enroll approximately 30,000 participants in the U.S. for this trial. Moderna was also selected as part of the Trump administration's Operation Warp Speed Initiative, which aims to speed up the development of a vaccine for COVID-19. Only four other companies received that status, and Novavax was not one of them. 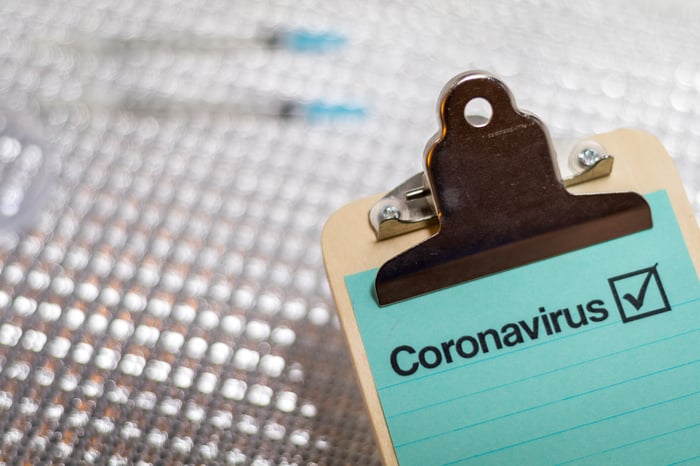 But it would be a mistake to ignore Novavax's chances in this race. The company recently announced a phase 1/2 trial for its vaccine candidate, NVX-CoV2373. The first phase of this trial will be held in Australia and will test the safety and immunogenicity of two doses of the vaccine in 130 healthy participants. The second phase of the trial will be conducted in several countries -- including the U.S. -- and will test the safety, immunity, and disease reduction of NVX-CoV2373 in a broader age range of participants.

Ultimately, what will matter the most will be the results from these (and subsequent) clinical trials, and while Moderna leads Novavax at this point, things could change quickly. For that matter, some other company could leapfrog both Moderna and Novavax in this race. Investors will want to keep a close eye on how things develop.

Comparing their other pipeline candidates

At first glance, Moderna's pipeline looks more impressive than Novavax, because Moderna currently has more products in development. Moderna is presently working on vaccines for the Zika virus, several cancers, and many other conditions. However, none of these vaccines have made it to a late-stage trial yet.

Although Novavax has fewer candidates in its pipeline, the company's NanoFlu -- a potential flu vaccine for adults over the age of 65 -- has already been tested in a phase 3 clinical trial, the results of which were positive. Novavax will likely submit a Biologics License Application to the U.S. Food and Drug Administration (FDA) for NanoFlu soon. This vaccine, which Novavax says is superior to the current market leader, could turn into a big winner for the company.

Neither of these companies is profitable yet, which isn't unusual for clinical-stage biotechs. With that said, peeking into their statements and assessing their financial strength is essential. The table below shows some key metrics from the respective first-quarter earnings reports of Novavax and Moderna.

Novavax, the smaller of the two companies by some margin, makes up for its lower revenue and significantly lower cash balance with lower expenses and a smaller net loss. It is also worth noting that both of these companies have received funding from third parties in their race to develop a vaccine for COVID-19. Moderna received a grant of up to $483 million from the Biomedical Advanced Research and Development Authority (BARDA) to help accelerate the development of its vaccine candidate. The government agency could chip in again in the future; Moderna is gearing up to manufacture up to 1 billion doses of mRNA-1273 per year starting in 2021 if it is approved.

For its part, Novavax received investments of up to $388 million from the Coalition for Epidemic Preparedness Innovations (CEPI) to help develop and manufacture NVX-CoV2373. Given the high stakes, it is unlikely that either company will run out of funding -- or potential investors and collaborators with deep pockets -- anytime soon.

Although Moderna is currently ahead in the race to develop a vaccine for COVID-19, Novavax isn't too far behind. However, while Novavax has a promising pipeline candidate on its hands in the formof its NanoFlu vaccine, Moderna has yet to advance any of its pipeline candidates to a phase 3 clinical study. Based on these factors, I think Novavax is a better buy, but here's one more thing to consider.

Novavax, which is currently trading at about 318 times its future sales, is more expensive than Moderna and its 218 forward price-to-sales ratio. Novavax's juicy valuation makes it less attractive, but I still think it is the better option. With that said, I think both stocks are risky at this point, and only those investors comfortable with a little risk should initiate a position -- and a small one at that -- in either biotech stock.