Please ensure Javascript is enabled for purposes of website accessibility
Log In Help Join The Motley Fool
Free Article Join Over 1 Million Premium Members And Get More In-Depth Stock Guidance and Research
By John Rosevear – Jun 18, 2020 at 10:39AM

Ford adds another key piece to its no-excuses Tesla fighter.

Ford Motor Company (F -3.60%) said on Thursday that it will offer a hands-free driving system on its upcoming electric Mustang Mach-E next year, as it works to position the Mach-E against Tesla's (TSLA -4.59%) Model Y and upcoming electric vehicles from General Motors (GM -5.08%).

Ford said that its system, called Active Drive Assist, will be offered on a number of new Ford models, including the Mach-E, starting in the second half of 2021.

U.S. buyers of the Mustang Mach-E will be able to order their vehicles with an Active Drive Assist hardware package later this year. Buyers who select the hardware option can elect to purchase the software and receive it via an over-the-air (OTA) update when it is released in the fall of 2021. 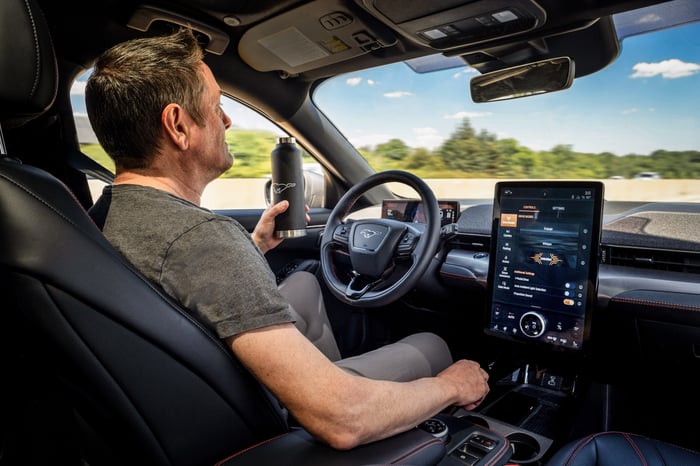 Ford emphasized that its system will have true hands-free functionality when the vehicle is driving on a pre-mapped stretch of highway. An infrared camera will track eye and head position to ensure that the driver continues to pay attention to the road ahead while the system is operating. GM's Super Cruise, a hands-free highway-driving system introduced in 2017, uses a similar method.

The camera-based driver-tracking system will distinguish Ford's Active Driver Assist from Tesla's Autopilot, which — according to Tesla's own documentation — is not intended for hands-free use, although many Tesla owners use it that way.

The current iteration of Autopilot uses a simpler method (the driver has to touch the steering wheel at regular intervals) to check driver attention.

Ford said that Active Drive Assist will be available on other 2021 models, but didn't provide details on Thursday. One possibility is the F-150 pickup: Ford has scheduled an event to reveal an all-new version of its huge-selling truck later this month.