Please ensure Javascript is enabled for purposes of website accessibility
Log In Help Join The Motley Fool
Free Article Join Over 1 Million Premium Members And Get More In-Depth Stock Guidance and Research
By Jim Halley - Jun 18, 2020 at 7:34AM

Zynex climbed to record highs on Thursday, but there are reasons to pump the brakes on this medical equipment company.

Yes, you read that last sentence correctly. Despite all the turmoil in the market this year, Zynex's share price has skyrocketed, with a 122% rise in the past three months alone. The question is: Can it continue? 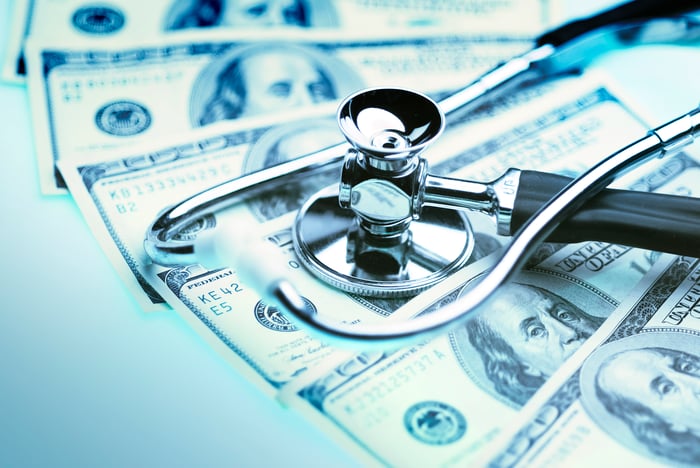 The company's finances are in a good place The company has three divisions: medical, which provides electrotherapy products for home use; monitoring solutions, which develops cardiac monitoring products for hospitals; and neurodiagnostics, which develops devices for electromyograms (which assess the health of muscles and the nerve cells that control them) and electroencephalograms (which measure electric signals to the brain).

The company's business model is heavily based on providing pain relief through its line of electrotherapy products. It hopes to serve as an antidote to what some see as the healthcare industry's excessive reliance on opioids for chronic pain treatment.

Many of Zynex's products are designed for long-term use, which partly explains why the company hasn't been affected by supply disruptions the way other companies have. March orders were down 14% and April orders were down 35% compared with January and February averages.

"This minor temporary decline in orders speaks volumes [about] the relationships our sales force has with many prescribers and the need for them to prescribe non-opioid, nonaddictive, prescription-strength solutions for the patients in pain," CEO Sandgaard said in Zynex's first-quarter earnings call.

The stock may be overheated

The first sign of overheating is that the company has expanded its sales staff, which is largely why revenue is growing.

In 2018, the company had no employees in direct sales. By the end of last year, the company listed 134 direct sales representatives among its 283 full-time employees, in addition to 42 independent, commission-only sales contractors. And Sandgaard said in March that he would like to see his sales force grow to cover 400 territories by the end of the year.

Orders in the first quarter were up 126% up year over year and 3% over the fourth quarter of 2019. While sales have risen, operating margins have actually declined since 2018.

The second warning sign is that the company's income comes primarily from being reimbursed by insurance companies, so any change in reimbursement policies can negatively affect the company. TRICARE, the healthcare program of the United States Department of Defense Military Health System, recently announced that on June 1, Transcutaneous Electrical Nerve Stimulation (TENS) units and the supplies to support the devices will no longer be covered for acute, subacute, and chronic lower back pain. That includes Zynex's NexWave TENS device.

A third warning sign is that there has been a lot of insider selling lately. Executives sell stock all the time for a variety of reasons, but the amount of shares being sold right now makes one wonder. Since the start of the year, Sandgaard and Chief Financial Officer Dan Moorhead have sold 380,152 shares of stock and have acquired 164,000 shares.

A better long-term play than a short-term one

It's not a reach to say the company's share price may be due for an adjustment based on how much its share-price growth has outpaced its rise in revenues. Its price-to-earnings ratio as of Friday was 71.8, way above the medical equipment industry average of 45.3.

As a long-term investment, however, the company still appears to be a solid bet. It is one of only a handful of players in neuromodulation, a market that analysts expect will see 10.7% year-over-year growth through 2024.