The Dow and S&P edged lower as coronavirus fears amped up.

Market participants have been uncertain about what the next step for the stock market will be, and today, nervousness ended up winning the day. Despite solid economic data, investors are nervous about spikes in COVID-19 in some key areas of the country that haven't previously seen the worst of the outbreak. Although the Dow Jones Industrial Average (^DJI) and S&P 500 (^GSPC -1.02%) gave up early gains to finish lower on the day, the Nasdaq Composite once again defied the market and gained ground.

Airline stocks have been extremely volatile lately, and that trend continued today. Travel trends have started to look more favorable lately, but that could come to a sudden halt if new outbreaks cause would-be travelers to stay at home longer.

Losses for the airline industry were felt across the board. Among major carriers, United Airlines Holdings (UAL -1.30%) took the biggest decline, falling 6%. Delta Air Lines (DAL 0.33%) gave up 4%, while American Airlines Group (AAL -1.09%) and Southwest Airlines (LUV -1.36%) were both down around 3%. 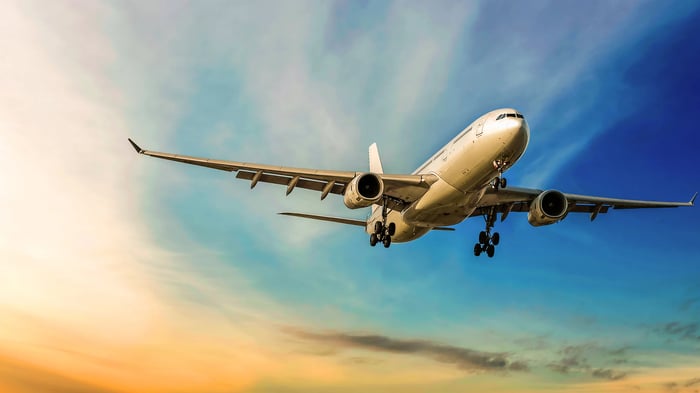 Airlines of all sizes are struggling with the same challenges. Although the major companies have greater international exposure that presents additional obstacles to overcome, the primary problem facing airlines is how to adapt their business models to deal with the new reality of health and safety consciousness while remaining profitable.

Making it through the shutdown

Airlines have burned through billions of dollars covering expenses even as flight loads fell nearly to zero at times during the worst of the pandemic. And although traffic levels are recovering, most carriers still face significant negative cash flows. Most companies have already sought to raise capital from the financial markets, and government assistance has also been an option to help airlines maintain their labor forces and stay afloat.

Yet the cash that airlines have already come up with might not be enough. American is looking to sell $2 billion in high-yield bonds, with the idea of raising even more capital to make sure that it has enough cash reserves to weather an extended period of sluggish performance or a second wave of shutdowns. The move follows United's similar move to raise $10 billion announced on Thursday. With bond-rating agencies having already reduced American's rating to junk bond status, the airline could end up paying double-digit interest rates on the debt, similar to what we've seen with the cruise ship industry.

Meanwhile, airlines are getting a mixed reception from passengers about safety measures. The required use of masks has become a more contentious issue than many had expected, with some travelers feeling that airlines aren't doing enough for safety while others don't want to wear masks at all. Carriers will have to walk a fine line to avoid alienating at least a portion of their customer bases.

Airline stocks face an uncertain future, and it'll be tough to predict what the industry looks like six months or a year down the road. If airlines can return to something resembling their past business models, then the stocks could climb back. But many investors will need to see what that new normal really looks like before they'll be ready to take positions.