Livongo Health (LVGO) is one of the post-market-crash winners. Shares of the digital-health company have soared more than 200% from their March low. And the stock is up more than 100% from its initial public offering price in July.

Digital health has gained in popularity with the idea that managing patients' conditions at home leads to lower hospitalization rates and lower healthcare costs later. Now the question is whether this new kid on the stock market block can make you a millionaire. Let's take a closer look. 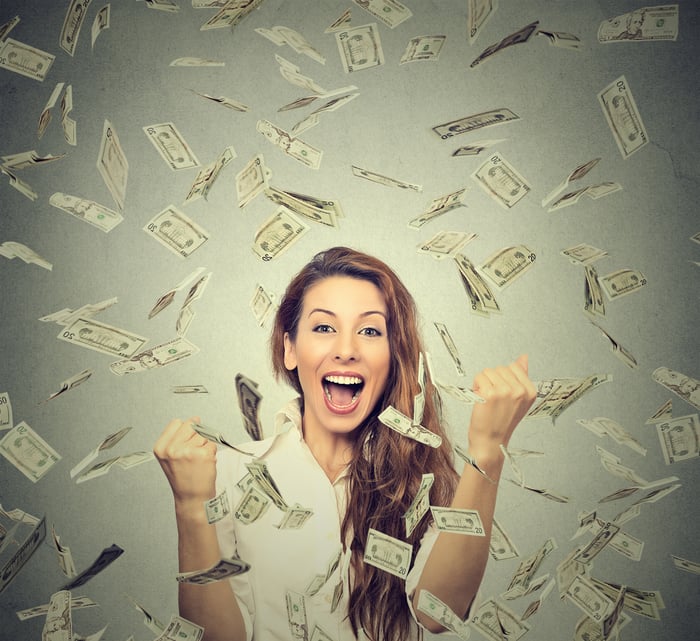 Livongo's first major market is diabetes management. Using artificial intelligence, Livongo delivers personalized coaching to members to keep them healthy and out of the hospital. Though Livongo's diabetes membership surged 100% to 328,000 in the first quarter compared to the previous year period, there is plenty of room for growth. About 34.2 million Americans have diabetes, and 88 million American adults have prediabetes, according to the Centers for Disease Control and Prevention (CDC).

The company is expanding into other areas with great potential, including diabetes prevention, hypertension/high blood pressure, weight management, and behavioral health. For example, more than 100 million Americans have high blood pressure, according to American Heart Association statistics. And nearly 72% of Americans age 20 and older are overweight, according to the CDC.

So how does Livongo connect with potential users? The company sells its services to employers and health systems, who in turn offer it to employees and members. Recent big contracts include partnerships with the Government Employee Health Association (GEHA) and Kaiser Permanente. GEHA covers 2 million federal employees and their families, and eligible members will now receive Livongo's diabetes, hypertension, and diabetes prevention programs as a covered benefit. The deal represents one of Livongo's biggest contracts ever. Kaiser Permanente signed a 5-year contract for Livongo's behavioral health program.

A record 380 client launches in the first quarter took Livongo's total client number up to 1,252. And those gains drove revenue higher, up 115% year over year to $68.8 million. Livongo defines a client as a business that has at least one active paid Livongo contract at the end of a quarter.

Revenue on the rise

Revenue has been on the rise since Livongo's IPO, and the company predicts that will continue. For the full-year 2020, Livongo says it expects revenue to grow between 70% and 78% to the range of $290 million to $303 million. That's up from the company's expectations of $280 million to $290 million.

Revenue momentum and large markets are both reasons to believe shares in Livongo can multiply. There are two near-term risks, though. Livongo posted an adjusted EBITDA profit of $3.8 million in the first quarter, but hasn't delivered profit steadily from quarter to quarter or on an annual basis. In the first-quarter earnings call, the company reaffirmed its goal for sustained adjusted EBITDA profitability next year. 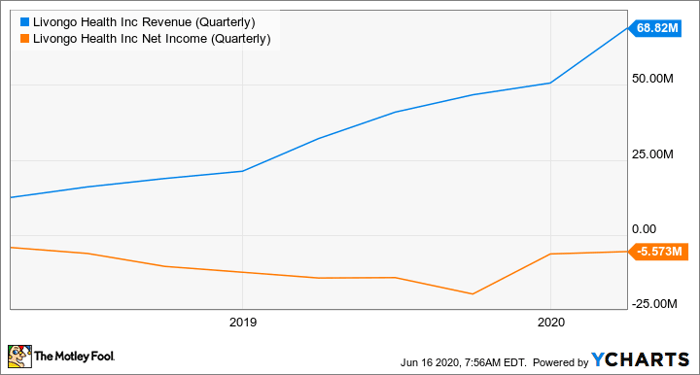 In the meantime, the company continues to invest in sales, marketing, and research to drive growth, and says this investment will show up as expenses in the second half. The question moving forward is whether Livongo can invest enough to keep growing but still deliver on profitability promises. If Livongo can meet its profitability goal, the shares may move considerably higher. However, the shares may face a setback if the company misses that goal.

The second risk is the health of companies in general. After the March market crash and amid current economic weakness, some companies that might have otherwise signed on as Livongo clients may postpone those plans. Many potential clients are cutting costs these days after coronavirus-related spending and/or lost business due to stay-at-home orders around the country. This could weigh on Livongo in the near term.

Is Livongo a millionaire maker?

That said, for the long-term investor, Livongo remains an interesting opportunity because the company is at the beginning of its growth story. The markets it addresses are significant, offering plenty of potential clients, and therefore, members. If the economic slowdown eventually weighs on Livongo's revenue growth, the situation should be temporary. So that isn't a major concern.

The key factor for Livongo will be managing investment to continue growth while assuring profitability. If Livongo can do this, the shares have a strong chance of moving higher -- and some investors in this healthcare stock may make millions.