Shares of Teladoc Health (NYSE:TDOC) have more than doubled in 2020 and analysts tasked with watching the telehealth pioneer are confidently predicting more gains ahead. Ahead of Teladoc's third-quarter earnings call, Sean Wieland at Piper Sandler raised his price target for Teladoc to $305, a 42% gain over the stock's recent price.

Teladoc Health stock dipped during Thursday's trading session despite a positive vote to join forces with Livongo Health (NASDAQ:LVGO). Here are four of the biggest reasons investors can be confident about Teladoc's ability to make the Livongo deal work for investors and surpass lofty analyst expectations. 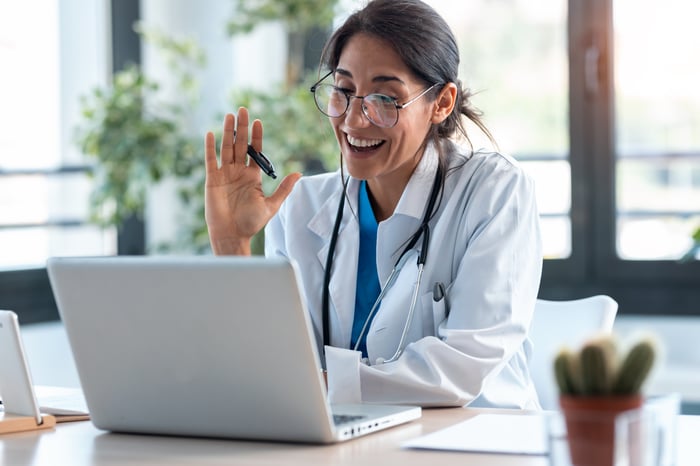 1. Chronic care is a massive opportunity

Around 86% of all healthcare costs in the U.S. can be attributed to chronic diseases, which affect about half the population. An upcoming merger between Teledoc and the leading chronic care management business, Livongo expected to close before the end of the year will make Teladoc the undisputed leader of chronic care management.

Livongo is applying proprietary AI technology to health signals produced by today's fancy new medical devices and smartwatches in the emerging field of 'remote patient monitoring.' Livongo Diabetes is the company's most popular service at the moment, and more recently it launched offerings for hypertension, weight management, and behavioral health that are growing fast.

Teladoc Health began raising capital on the public markets in 2015 and since then has invested around $2 billion into acquisitions. A glance at the company's operating performance in recent years suggests those acquisitions were well planned and gracefully executed.

Teladoc's held on to more than 90% of the clients it's acquired and ease of retention shows on the company's recent income statements. In the first nine months of 2019 revenue rose 79% against total operating expenses that rose just 64% over the same period.

Teladoc Health finished September with 51.5 million paid members in the U.S. and another 21.8 million had access to visits for a fee. Utilization rates more than doubled in the third quarter, but at just 16.5% there's clearly room for growth through Livongo's chronic care management services.

The number of members using Livongo's diabetes management service reached 442,000 members at the end of September, but that's just a tiny sliver of the overall patient population. The Centers for Disease Control and Prevention (CDC) thinks there are about 34.2 million Americans diagnosed with diabetes right now and cases are rising fast. The CDC estimated just 26.8 million cases of diabetes among U.S. adults in 2018.

Teladoc's plan to boost the overall utilization of its telehealth services by adding Livongo's chronic care services appears to be working before the deal has been completed. In fact, as Teladoc Health CEO Jason Gorevic was getting on his company's third-quarter earnings call, he received a note about the signing of another large Teladoc client to Livongo's chronic care services.

About a couple of weeks ago, Teledoc closed on a major cross-sale to GuideWell Health, an enterprise that serves 27 million people across 35 states including members of the Blue Cross and Blue Sheild plan of Florida.

Florida Blue, a Guidewell subsidiary already offers Teladoc Health's general medicine program and soon its members will also have access to Livongo Diabetes. In 2021, Florida Blue will expand its partnership even further to provide members with behavioral health services.

A good stock to buy and hold today

Teladoc shares are up around 162% in 2020 and it might be tempting to lock in those big gains. It will be years before we know for sure, but that's probably the wrong move right now.

Merger expectations aside, Teladoc and Livongo were expected to earn a combined $378 million in 2022 before adjusting for interest, taxes, depreciation, amortization, and other one-time charges. Once we add in new cross-selling opportunities and factor out overlapping operating expenses, it's not hard to imagine this healthcare company earning $1 billion annually by 2025.