Please ensure Javascript is enabled for purposes of website accessibility
Log In Help Join The Motley Fool
Free Article Join Over 1 Million Premium Members And Get More In-Depth Stock Guidance and Research
By Rich Smith – Updated Jun 19, 2020 at 11:45AM

The shell company will merge with and bring public the Class 8 hybrid electric truck-maker Hyliion.

Shares of Tortoise Acquisition Corp (SHLL) are racing faster than a rabbit this morning, up 48.1% as of 11:25 a.m. EDT after the shell company (get it? Tortoise? Shell?) announced a deal to acquire and bring public privately held "electrified powertrain solutions for Class 8 commercial vehicles" company Hyliion.

Investors are racing too, to grab a piece of the presumed "next Nikola (NKLA -1.03%)," a start-up automotive stock that itself has more than doubled in price since coming public by way of a similar shell company merger. 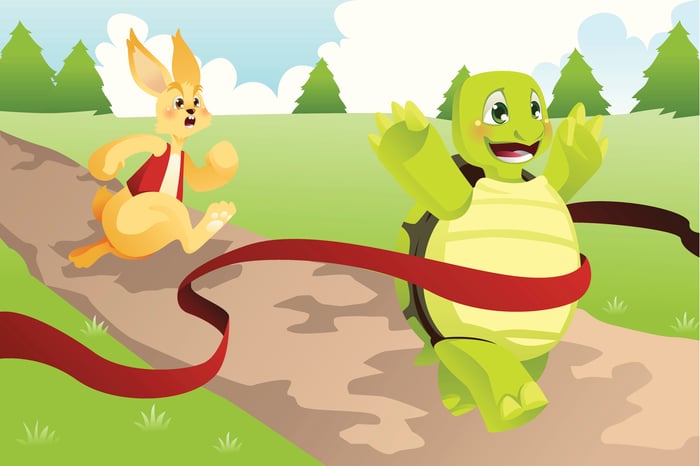 So what is this Hyliion that Tortoise is buying? In a joint press release sent out this morning, Hyliion CEO Thomas Healy explained that Hyliion, founded five years ago, is "an industry leader in Class 8 truck electrification with its hybrid and fully electric powertrain solutions."

A Tortoise representative argues that its new acquisition is "directly comparable to Nikola," in that it will effect an IPO "through special purpose acquisition company (SPAC) like Nikola did," although Hyliion takes a different approach to its technology by using "natural gas/ renewable natural gas (RNG) vs. Nikola's hydrogen." Additionally, Hyliion (which will be the company's new name after Tortoise completes its acquisition) aims to retrofit existing fleets of trucks with its technology, rather than building and selling entirely new trucks, as Nikola hopes to do.

Tortoise anticipates that, upon closing its acquisition of Hyliion, the merged company (which will be tickered HYLN and trade on the NYSE) will carry a $1.5 billion (or better) combined market capitalization. The merger will also include a $325 million private placement of shares, priced at $10 each. Combined with cash already on hand at Tortoise, the companies say they will start off with more than $560 million cash, which "will be used to fully fund the commercialization and mass production of the company's electrified powertrain solutions."

The merger is scheduled to close at the end of the third quarter of 2020. Momentum traders can probably expect these shares to hop around quite a lot over the next three months.