Please ensure Javascript is enabled for purposes of website accessibility
Log In Help Join The Motley Fool
Free Article Join Over 1 Million Premium Members And Get More In-Depth Stock Guidance and Research
By Will Healy – Jun 20, 2020 at 9:15AM

Investors considering these two chip industry giants must choose between rapid growth or a discounted multiple.

Advanced Micro Devices (AMD 1.31%) and Intel (INTC -0.30%) have been rivals for decades. During the PC era, Intel remained comfortably ahead of AMD. However, the decline of the PC set events in motion that eventually changed the dynamic for these semiconductor stocks. AMD appears to have pulled ahead of Intel in the technology race in many respects.

This has led investors to bid both the valuation and the stock price of AMD higher. Still, despite Intel's struggles, it offers investors a lower P/E ratio and remains a larger company. It also brings the potential for massive gains should Intel regain its leadership role in the chip sector. The question for investors now is whether AMD's fast growth or Intel's lower valuation holds more potential to deliver investor returns.

Why investors should consider AMD

AMD's ascendancy may have taken almost 50 years, but its advancement has upended the chip industry. In 2015, AMD stock had fallen below $2 per share, and many investors assumed it would fall into bankruptcy. 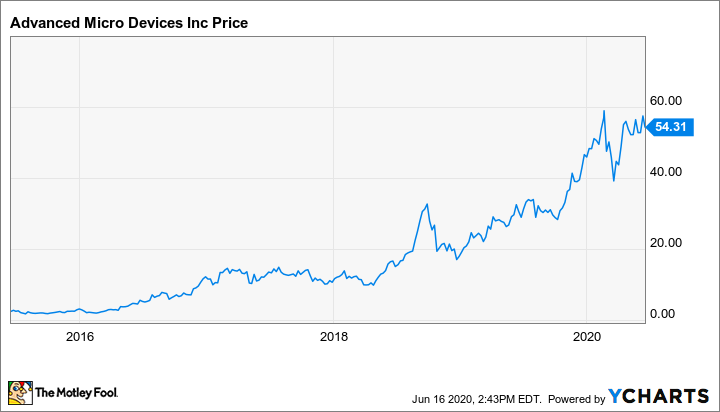 Instead, CEO Lisa Su staged a turnaround, transforming AMD into a top competitor in the chip space. Consequently, AMD is now the only company in the world to produce high-performance CPU and GPU chips.

Though AMD's third-generation Ryzen chip does not beat Intel in many respects, many see the Ryzen chip as the better value proposition thanks to its lower pricing. Additionally, AMD's EPYC processors could soon challenge Intel in the server market. 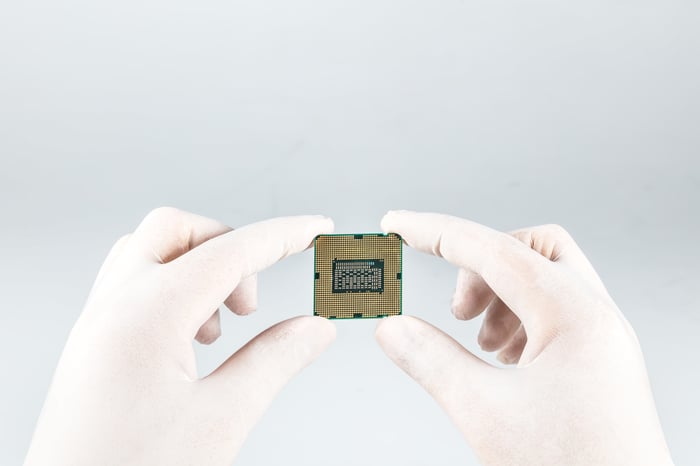 These strides against both Intel and NVIDIA have helped make AMD an expensive stock. The forward P/E ratio now stands at approximately 54.6. However, earnings could make this expense worthwhile. Analysts forecast net income will rise by 60.9% this year and 47.6% in fiscal 2021.

Also, in many respects, AMD is just getting started. In the most recent quarter, the company reported revenue of $1.79 billion. While that represents an increase of about 40% on a year-over-year basis, it pales in comparison to Intel's revenue of $19.8 billion for the quarter.

It remains unclear to what degree Intel's larger size will help the company. Intel has struggled to find its way back as management turmoil and an apparent lack of direction slowed the growth of its stock. Some investors wonder when -- or if -- the company will "regain its mojo." 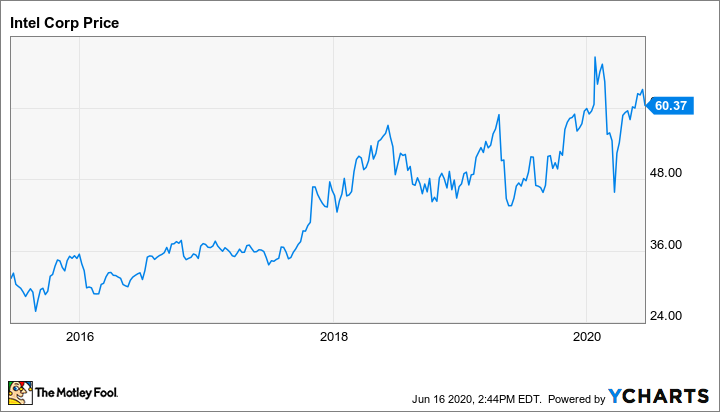 However, Intel has sought to recapture its lost business in the chip space as it promotes its 10nm processors. It has also changed its focus by moving into areas such as data centers and 5G. While the 5G story is in its early chapters, it could potentially become the technology that revives Intel as more adopt the new wireless standard.

Moreover, Intel operates its own foundry. Unlike AMD, it does not have to rely on a company such as Taiwan Semiconductor to make its chips, so it has more control over its production.

Furthermore, the turbulence of recent years has made Intel an inexpensive stock. It currently sells at a forward P/E ratio of about 12.9. Admittedly, a projected earnings decline of 1.8% in 2020 and predicted profit growth of 1.9% in the following year may deter investors. However, analysts also predict average earnings growth of just under 9.1% per year over the next five years. If 5G or some other catalyst improves growth, Intel stock could easily see significant multiple expansion.

The prospect of an eventual comeback makes Intel an attractive investment. However, when comparing growth versus valuation, I lean toward AMD as a better investment, despite its considerable expense.

AMD is firing on all cylinders, and the increasing technological leads over both Intel and NVIDIA are too compelling to ignore. Moreover, with AMD bringing in less than a tenth of the revenue earned by Intel, the company holds tremendous potential to grow further.

Like other tech peers before it, Intel could still make a comeback. However, when or how that might happen remains unknown. Despite the much higher valuation, AMD's growth rate relative to its valuation gives it an edge. Since AMD is still a much smaller company, its growth story may have barely just begun.