Please ensure Javascript is enabled for purposes of website accessibility
Log In Help Join The Motley Fool
Free Article Join Over 1 Million Premium Members And Get More In-Depth Stock Guidance and Research
By Keith Speights – Jun 20, 2020 at 6:47AM

Warren Buffett isn't winning so far in 2020. Shares of his beloved Berkshire Hathaway (BRK.A -0.27%) (BRK.B -0.38%) are underperforming the S&P 500 index by around 15%. Most of the individual stocks owned by Berkshire remain in negative territory year to date.

But this doesn't mean that the Oracle of Omaha doesn't have some winning stocks in Berkshire's portfolio. Actually, two of Buffett's winners are largely carrying the entire stock market on their shoulders. 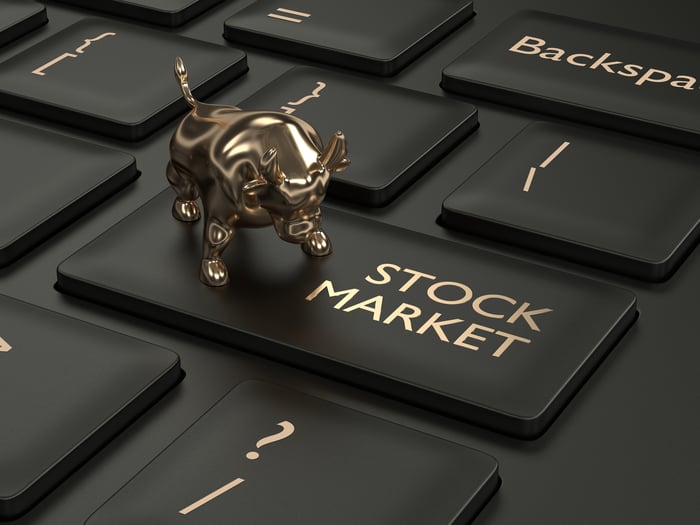 Warren Buffett is famous for not investing in companies he doesn't understand. As a result, technology stocks haven't played a big role in Berkshire's investment strategy -- at least that was the case until a few years ago.

In 2016, Buffett finally took a bite out of Apple (AAPL 0.21%). A big bite. It didn't take very long for Apple to become the single-largest holding in Berkshire's portfolio.

He became such a huge fan of Apple that he has referred to it as Berkshire Hathaway's "third-largest business." Buffett stated in an interview with CNBC earlier this year that Apple is "probably the best business I know in the world." Apple has been a big winner for Buffett since 2016. It's also been one of the legendary investors' few winners so far this year, racking up a gain close to 20%.

There's another huge tech stock that's been an even bigger success story for Berkshire in 2020 -- Amazon (AMZN -1.14%). Shares of the e-commerce giant have skyrocketed more than 40% year to date, making Amazon the top-performing stock in Berkshire's portfolio.

However, Buffett didn't take the lead with Berkshire's investment in Amazon as he did with Apple. Even before a regulatory filing in May 2019 revealed that Berkshire had invested in Amazon, Buffett stated in an interview that one of his investment managers had initiated the purchase. He acknowledged, though, that he had "been a fan" of Amazon for a while and had "been an idiot for not buying it."

It's easy to examine the performances of the stocks in Berkshire's holdings to see how Amazon and Apple stack up against the rest. What's not so evident, at least on the surface, is how important the two stocks have been this year in driving the stock market higher.

The S&P 500 index is weighted by market cap, with larger companies carrying greater weight in the index. As two of the three biggest companies in the world, Amazon and Apple together make up more than 9% of the S&P 500.

Just how much do Amazon and Apple carry the stock market on their shoulders? The S&P 500 is down around 5% year to date. Without the big gains by these two giant tech stocks, the index would be down around 8%. Just two stocks have caused the S&P's year-to-date loss to close to half of what it would have been otherwise.

The top five companies in the S&P 500 -- add Microsoft, Facebook, and Alphabet to the mix, along with Amazon and Apple -- make up around one-fifth of the entire market cap of the index. Combined, the stocks of these companies have pushed the S&P 500 up by a little under 5% this year.

But there's an open secret: A very small number of very big companies drive the overall stock market. It's extremely difficult for the market to perform well when these tech giants are floundering. And when these big stocks are doing well, the overall market isn't likely to perform too badly.

Amazon, Apple, and their technology peers seem likely to keep up their winning ways. That's good news for Warren Buffett -- and for the stock market.