New iPhone buyers may be compelled to buy more this fall.

While Apple might keep its price at $699 for this year's flagship model, it could have a hidden price increase, according to separate reports from two analysts, Ming-Chi Kuo and Dan Ives. The iPhone 12 released this fall may not come packaged with Apple's iconic earpods. The move would be a subtle way to drive sales of Apple's headphones, including the popular AirPods and its high-end headphones.

AirPods, part of the tech giant's wearable segment, have been a significant growth driver for the company. The company is also expected to release new high-end headphones later this year. 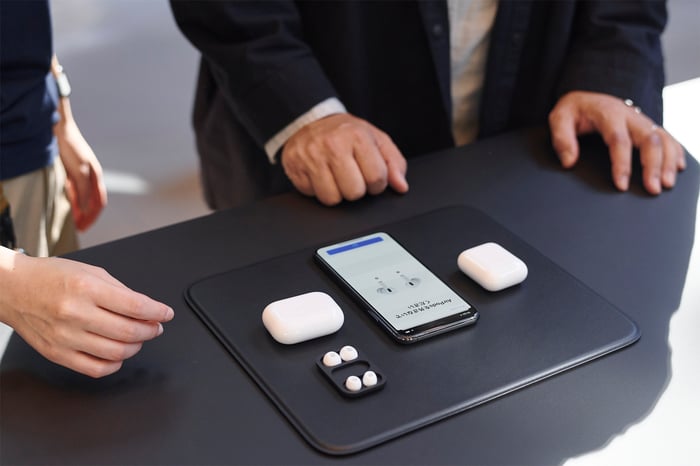 Apple could get away without including headphones

Apple got rid of the headphone jack on the iPhone in 2016 with the release of the iPhone 7. While there was a lot of outcry, consumers adapted, as did the rest of the industry. The growth of wireless headphones, including those made by Apple and its Beats subsidiary, has largely superseded the need for a headphone jack on mobile devices.

Meanwhile, packaging lightning-port headphones with the iPhone for the last four years has built up a strong supply of earpods capable for use in future iPhones. Apple has a massive installed base of iPhone users -- it's approaching 1 billion -- so there's not a huge need for another set of earpods for many iPhone purchasers.

That said, CEO Tim Cook told analysts switchers still represent a significant percentage of new iPhone purchasers during the company's third-quarter earnings call last year. A lack of compatible headphones bundled with the iPhone could cause the number of switchers to decline.

Importantly, Apple has made controversial headphone changes before, and it navigated through them just fine. Its strong brand and customer retention should help it successfully handle this change as well.

Apple has an opportunity to upsell new customers buying the iPhone 12 to high-end headphones like the AirPods lineup or its over-the-ear wireless headphones. Apple may take the opportunity to offer discounts on its AirPods when bundled with a new iPhone purchase

Ives expects AirPod sales to climb from 65 million last year to 85 million this year, despite no anticipated product updates this year. And thanks to the higher-priced AirPods Pro, it would double the amount of revenue generated. Through the first six months of fiscal 2020, Apple's overall wearables revenue is up 31%.

With high expectations for iPhone upgrades with this year's release -- thanks to the addition of 5G and a continually aging iPhone population -- Apple could have a big opportunity to sell a lot more AirPods. When customers are paying over $700 for a new phone, another $150 or $250 is a lot easier to justify, especially if it adds much-needed capabilities to the expensive device.

Furthermore, convincing consumers to buy AirPods along with their new iPhone further locks them into the Apple ecosystem. While AirPods work with most devices, they're designed for Apple products. Therefore, AirPod owners will be more inclined to buy another Apple device when they're looking to upgrade.

On top of that, Apple may offer financing or additional discounts for customers that use the Apple Card to make the purchase. The Apple Card is another way to lock consumers into its ecosystem while driving service revenue through increased Apple Pay use. (The card earns extra cash back for using Apple Pay versus the physical card.)

Overall, there are a lot of opportunities for Apple to capitalize on if it leaves earpods out of the iPhone 12 box. At the same time, the downside risk for the FAANG stock is minimal.